Tactically speaking: Each team’s most important player at the NWSL Challenge Cup 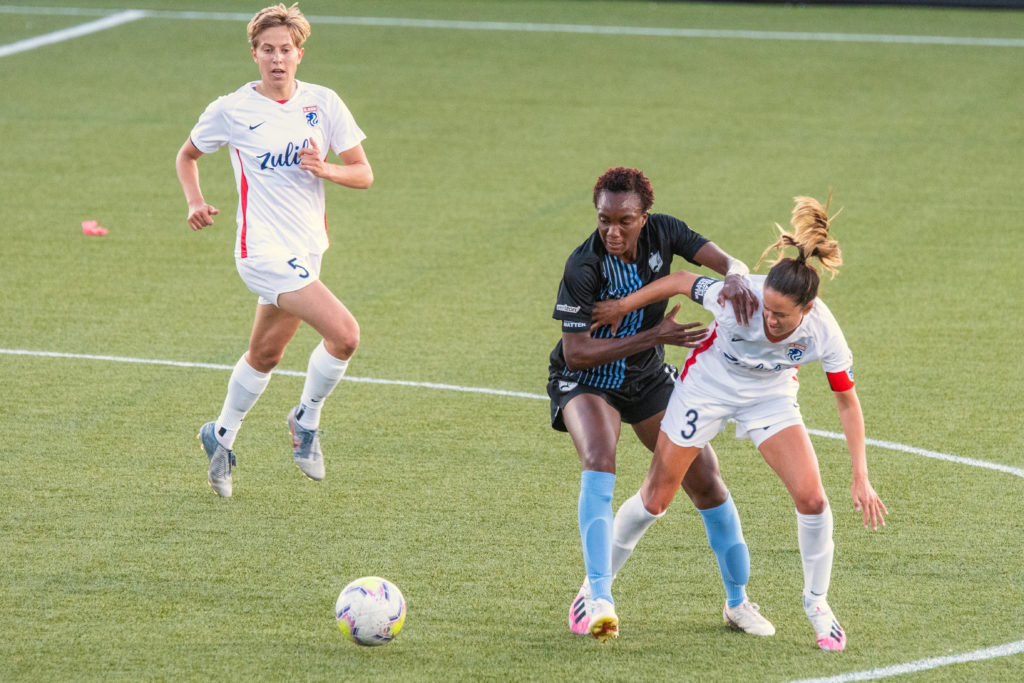 The 2020 National Women’s Soccer League Challenge Cup quarterfinals get underway on Friday. Ahead of the knockout rounds, we take a look at each team’s most important player from a tactical perspective.

The Courage could not have been more dominant in the league stage of the tournament. They were the only undefeated team, winning every game to secure maximum points. They kept three clean sheets, conceded the fewest goals, and scored the most. It’s difficult to pick one player out of a team with serious talent from one to 11, but Daniels could have a vital role going forward.

Next up for the reigning NWSL champions are Portland, who without Tobin Heath’s wing wizardry have stuck by a diamond midfield. Against a narrow defensive system, the Courage need their fullbacks to be at the top of their game. Daniels’ energy to cover the left flank has been integral to her team’s pressing, while her ability to create space for herself and play dangerous crosses into the box is a real threat in the final third. 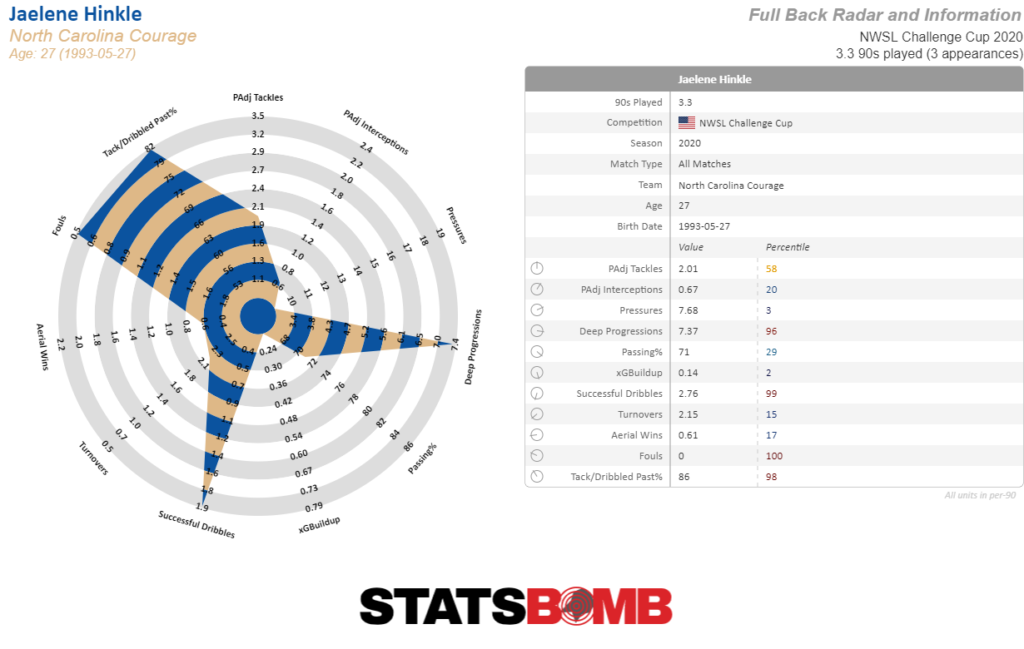 Washington established their status as the most promising young team in NWSL right now with some big wins last year and in the preliminary stage of this tournament, cementing their heavily possession-oriented style along the way. But Lavelle is the one player that adds real creativity and penetration to the team’s attacking play.

Renowned for her dribbling skill, the 25-year-old also possesses astute movement off the ball to find pockets or get in behind the last line, allowing her to turn an otherwise non-threatening sequence into a scoring chance. Considering head coach Richie Burke’s side may also be more cautious in some knockout-round games, as they were when countering Chicago to win their opening game, and Lavelle’s ball-stealing and single-handed initiation of counters will also be of huge benefit.

With a new manager and new players, OL Reign haven’t nailed down their style of play yet. This is why, aside from a stoppage-time winner against Utah from Bethany Balcer, they have been unable to score goals. They just don’t quite know how to use all that possession they generate. But Barnes has brought real value to their build-up.

The experienced center back has shown accuracy over distance to switch play, as well as vision to find teammates between the lines. Her recognition and range of passing helps to find free players in different areas, and the Reign will need that to break the defensive organisation of Chicago in the quarterfinals. 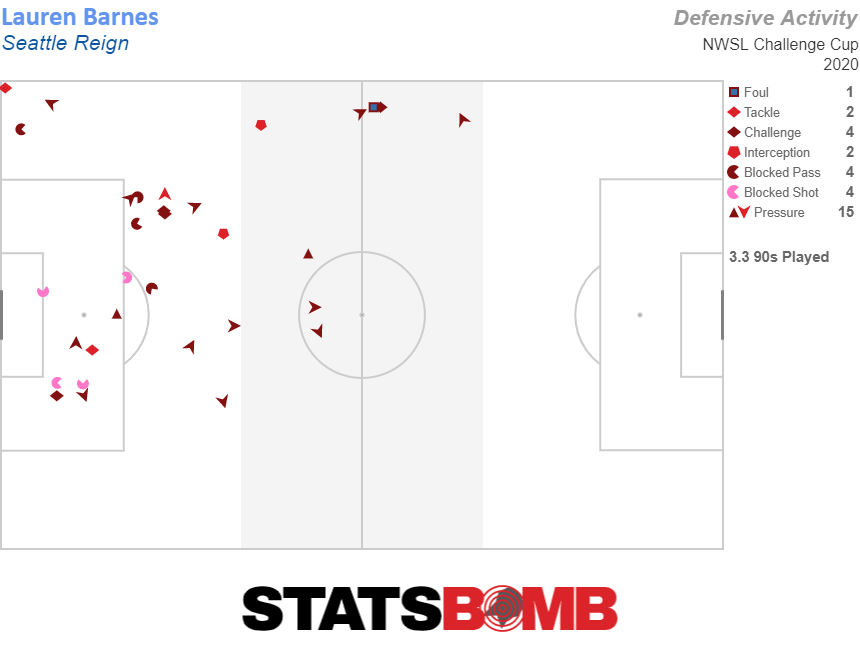 The Dash are fun to watch, and their style of play appears both increasingly clear and effective. They ran straight over the top of OL Reign in their second match of this tournament, with an intense pressing and clinical counter-attacking approach. Daly leads the way for them tactically for a variety of reasons.

Her speed helps to rush center backs when applying pressure, and this pace – along with exceptional movement – also helps on the counter, where she makes runs behind disorganized defensive lines and looks to receive balls over the top from the likes of Kristie Mewis. Or play the final ball herself, as she did for Shea Groom’s magnificent header against the Reign (below). Finally, in a team that doesn’t tend to dominate possession, she will need to take her chances when they come.

In the absence of Desiree Scott, Labonta underwent a change of position, taking up the No.6 role for Utah in their first two preliminary-round games. She has also been deployed in her usual No. 8 role at times, but it is likely she’ll be pushed back to make room for Vero Boquete and Diana Matheson in the knockout rounds. LaBonta’s non-stop running and nous for finding space were important aspects of her game playing as a No. 8 in Laura Harvey’s diamond midfield, and they are important for different reasons at No. 6 in Craig Harrington’s preferred 3-5-2.

Labonta needs to cover for Vero and Matheson defensively, and she also needs to create angles for the three-back to play into her during build-up. Once on the ball, she’s demonstrated fine long-range passing this tournament, with balls over the top for the likes of Amy Rodriguez to run onto. If the Royals are to play out effectively against the pressure of Houston, they will need their new deep playmaker at her best.

Versatility can be an advantage for a player, but not so much when the team is still figuring itself out. Chicago coach Rory Dames has yet to find a way to get his team to score consistently without Sam Kerr up front, and the task is a hard one. During this process, McCaskill has been moved around from No. 10 to striker, and has been in and out of the starting line-up. But without doubt, the Red Stars look better with her in the team.

McCaskill isn’t a regular goal-scorer, but she can create. This was underlined when she set up the winning goal for Chicago against Utah with a superb pick-out to get Casey Short isolated in an aerial duel with Kelley O’Hara at the back post. McCaskill’s passing and capacity for knitting moves together may help a new-look attack finally find its form in the knockout stages. 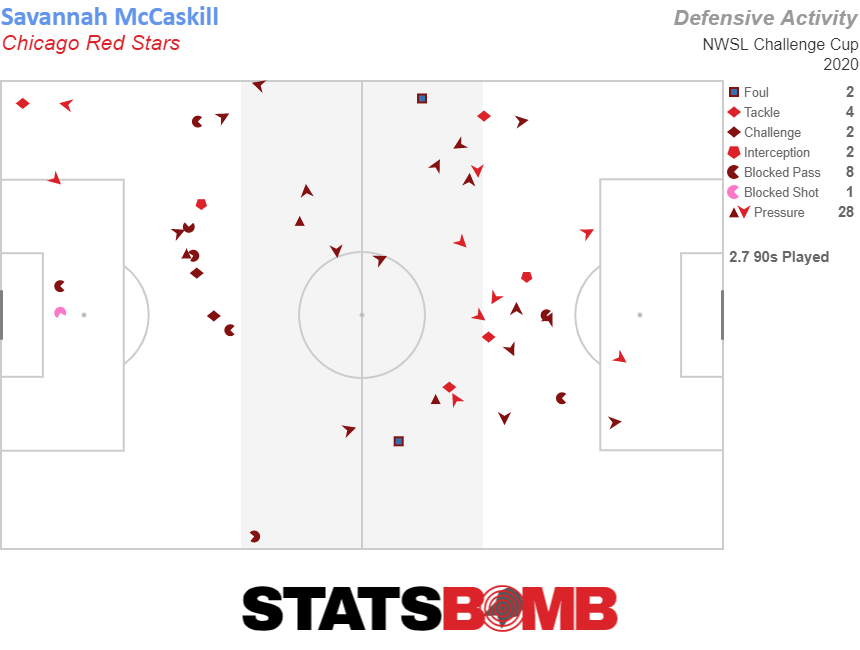 Sky Blue are slowly growing into this tournament, but Onumonu has been sharp from the very beginning. Her hold-up play, directness and dribbling have helped get her team up the pitch on numerous occasions, and she has also led pressing from the front. She was at her most dangerous against Houston, playing a brilliantly weighted through ball to get Paige Monaghan in to score and making darting runs in behind herself.

Head coach Freya Coombe’s decision to play Midge Purce at right back has not been universally welcomed, but Onumonu has played extremely well in the lone striker role which might best suit Purce otherwise.

The Thorns are the only team that might exit this Challenge Cup without a single win to their name, and that is mainly because they’ve lacked cutting edge in the final third. They’ve been able to build possession from the back and get into some dangerous positions with service from wide areas, but too often they are reduced to hopeful crosses into the box. Someone needs to help Lindsey Horan out on the creative end, and Rodriguez may be that player.

The Costa Rican will play a huge role in her team’s quarterfinal with the Courage. Defensively, she’ll have to help out controlling the forward runs of Jaelene Daniels, and offensively her strength and touch could be key to her team keeping hold of possession under intense pressure. If she can do all of that and provide more incisive final balls too, perhaps Portland won’t be going home winless. 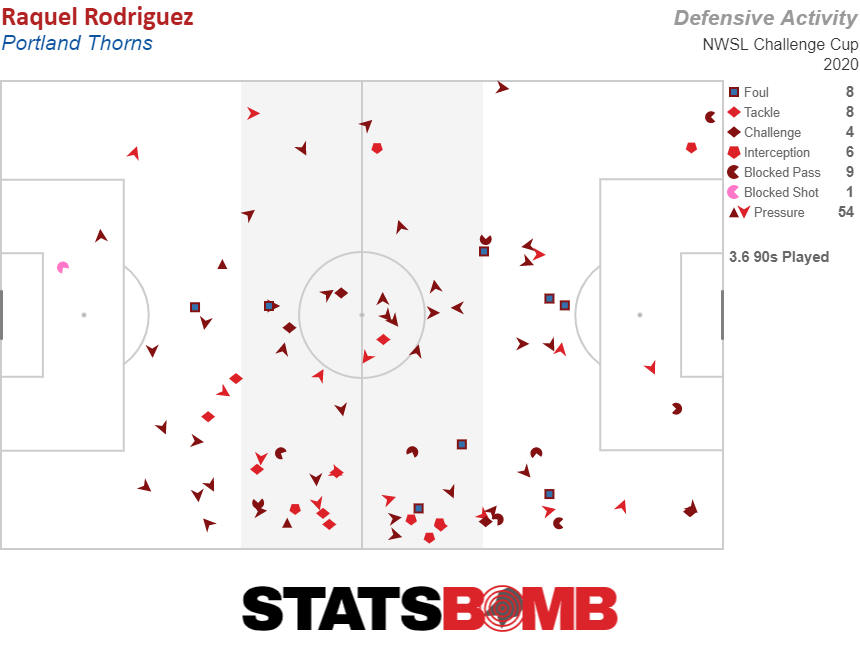 After knee injury and loss of her father, Nichelle Prince looks to move forward on the field
Eckerstrom shines in Portland Thorns 1-0 upset of North Carolina Courage