After knee injury and loss of her father, Nichelle Prince looks to move forward on the field 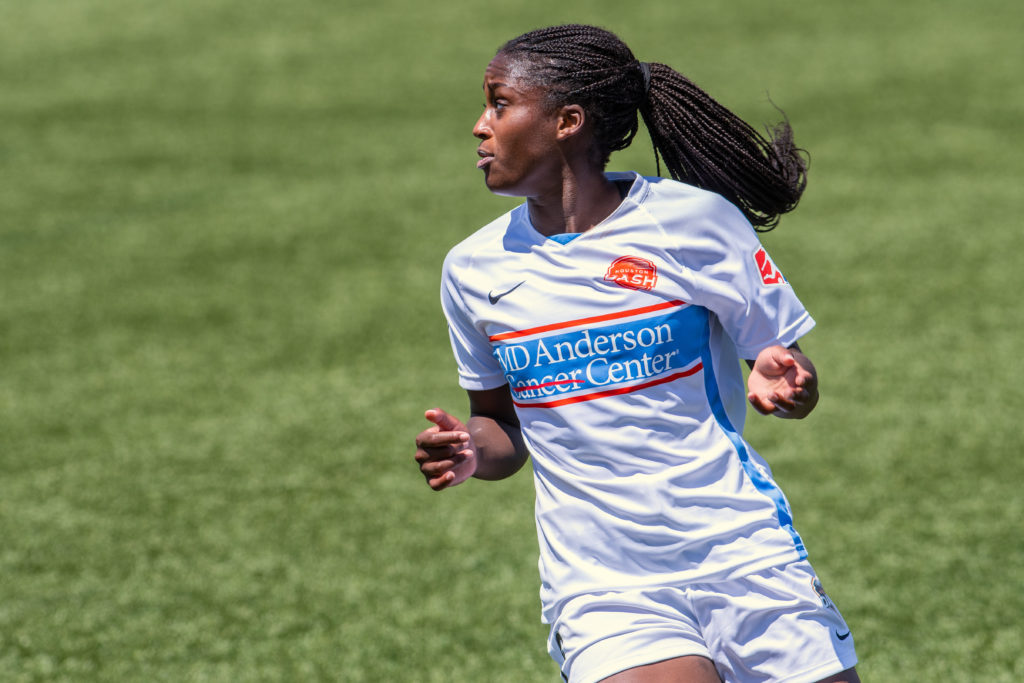 Houston Dash forward Nichelle Prince was not part of her team’s opening match of the 2020 National Women’s Soccer League Challenge Cup. While 2020 has been a universal challenge due to the global COVID-19 pandemic, the last year has been even more of a struggle for Prince.

As Prince prepared for the NWSL Challenge Cup with the Dash, she returned home to Ajax, Ontario, in June to deal with an unimaginable situation. Her father, Fabian, was hospitalized, and Prince wanted to get home to be with her family. Fabian died in mid-June. Prince shared on her Instagram account how much her father helped her as an athlete and a person.

I wrote this caption a while ago to prep for making this Father’s Day really special for my dad. I was excited for him to read it so that he knew how much I loved and admired him. I wish I would have told him sooner. I love you daddy. I miss you. Rest In Peace 💜 . . . Happy Father’s Day to the greatest man you’ll ever meet! I don’t brag about him enough so it’s about time I do that! Most people know that I grew up running track and my dad was my coach. What most people don’t know is that my dad not only trained me and my sisters, but hundreds of other athletes across a variety of sports. In over 10 years of coaching, my dad never asked for a dime for coaching his athletes! Not one! My family always thought he was crazy because he could of made a living off being a coach. He was amazing at it and he turned a lot of athletes into elites in their sport. My dad always said that he did it because he loved it. It wasn’t about the money, it was about helping people improve and get the best out of themselves. My dad is the biggest reason I am the athlete I am today. He would drag me out to the track on Friday nights and early on Sunday mornings to train me. At the time, there’s nothing I wanted to do less. I didn’t understand why I was being pushed harder than everyone else I knew. Little did I know he was setting me up to be a professional. He taught me what it means to be a hard worker. To make sacrifices and to believe in myself. But more importantly he taught me what it means to be a good person. To care for people and to give when you can to people who need it. On the drop of the dime, he will be there for anyone he knows (and even people he doesn’t). To this day, I haven’t met anyone better. I can only hope to be just a fraction of the person he is. Happy Father’s Day daddy. I love you and appreciate you!!

“I went back to Ajax for seven days,” Prince told to The Equalizer. “When I found out my dad was in the hospital, I went home. I missed about a week of preseason in Houston. I decided I was going to come back and play in the tournament, but because I traveled internationally, when I came back I had to quarantine for seven days.

“I was in Utah for seven days, but I was not around the team anywhere or allowed to be with them for training.”

Traveling from Houston to Toronto and then to Salt Lake City, meant that Prince had to quarantine twice, in two very different countries. When she made the decision to join her Dash teammates in Utah, that also meant that she would then have to self-quarantine on her own before re-joining the team for training, fitness, and team activities.

In an effort to make her isolation bubble a little less lonely, Prince decided to spruce up her hotel room with candles, photos, and blankets from her apartment in Houston. Having the support of her Canadian and Dash teammates has helped immensely.

“It has been pretty tough,” Prince explained. “These last twelve months, just in general have been a tough situation. I’m lucky to be on this team with a lot of people who are very caring and supportive during this time. It was important to get back to playing. It’s been a really long time since I’ve played with the Dash because of my injury last year.”

That injury came in Canada’s 2-0 win over New Zealand at the 2019 World Cup in France. It was an eventful day for Prince, who scored her first World Cup goal and picked up an assist on Jessie Fleming’s match-winner. The severity of Prince’s injured knee would not be known until after Canada had been eliminated in the round of 16 by Sweden.

A torn meniscus in her right knee sidelined Prince for three months, also ending her 2019 NWSL season with Houston. Prince returned to play in November when Canada competed at the Women’s International Tournament in China.

Prince made her 2020 NWSL Challenge Cup debut as substitute in Houston’s 2-0 win over OL Reign on July 4. Prince has come off the bench in the last three Dash matches. As a looming rematch awaits with Utah Royals FC in Friday’s quarterfinal, Prince is hoping to see her team get back to the free-flowing, fast-paced football that saw Houston score five goals in their first two matches.

“It’s exciting that we’re playing them again,” Prince said. “We got a lot of opportunities in that game. We went out with a fresh perspective and just played a lot more free. If we look back at the game, we’ll see that. Hopefully we can bring that same attitude and mentality into that game. I think it’s going to be a really good rematch. It really is anyone’s game.”

The Dash are working through some issues up top after a hot start, having been shut out the past two games.

“After those first two games, I think a lot of teams had their eye on us,” Prince explained. “Our team has a lot of threats that [opponents] have to nullify. Going into our last two games, people knew that and they were trying to take away our strengths. Looking back on those games, I don’t think we really have anything to worry about. I think if we make our play a little bit more unpredictable and build off our first two performances, we’ll be okay. We know that we can score goals; that’s not the issue.”

This is the first elimination game in the history of both the Houston and Utah franchises. Following a difficult year personally, Prince is working towards finding her form that she showed at the 2019 World Cup, and she hopes she’s part of the solution for the Dash to make a run in the Challenge Cup.