How the Spirit, Red Stars tweaked tactics against North Carolina 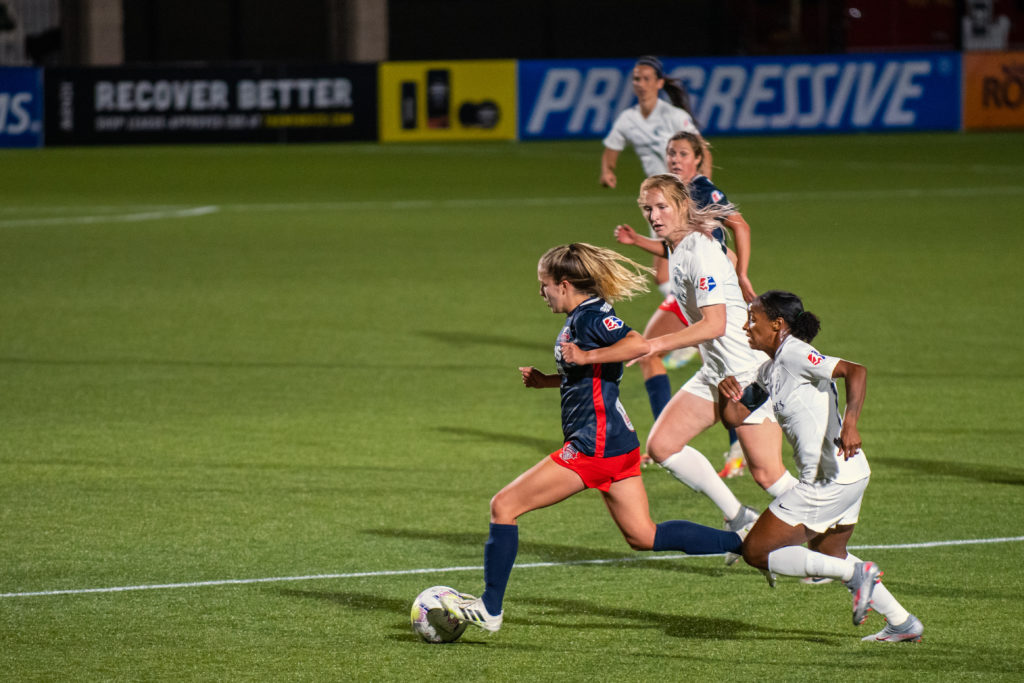 Each team in the National Women’s Soccer League headed into the 2020 Challenge Cup with its own set of questions. Some knew they had to figure out how to replace a key player lost in the offseason. Some had to integrate a large number of newcomers, and in a hurry. Others had to adjust to a new coach and whatever new ideas and tactics they were trying to bring to the team.

However, every single team thinking about actually winning the Challenge Cup faced the exact same question: How do we stop the North Carolina Courage?

North Carolina’s dominance over the rest of the NWSL in the past few years has been, simply, unmatched. After winning the 2016 title as an upstart (and as the Western New York Flash), Paul Riley’s squad won the NWSL Shield in 2017 and both the Shield and NWSL Championship in both 2018 and 2019. Over the past two years, they’ve won their playoff games by a combined score of 13-1.

The Courage dominate the game for a number of reasons, which include a talented roster, an incredible work rate, and a perpetual underdog mentality. They also entered this tournament with the least significant turnover of any roster in the league, really only needing to figure out who would start at right back with Merritt Mathias still recovering from injury and Heather O’Reilly having retired.

But another reason North Carolina is so difficult to beat is their 4-4-2 box midfield which sacrifices width to provide the team with four central midfielders. The system both suffocates opponents when the Courage don’t have the ball and creates nightmarish defensive match-ups for opponents when they do.

Everyone in the league knows this and, yet, over the last few seasons, the only team that managed to stop them when it mattered were the 2017 Portland Thorns — who did so employing a physical game plan that created one of the most unaesthetic games in the league’s relatively short history.

The Washington Spirit entered the Challenge Cup this summer as a team many pegged for a big tournament after an impressive turnaround last year — a success that was built on a young, talented roster and the arrival of a new majority owner and a new head coach in Richie Burke.

In 2019, Burke rebuilt the team as a possession-oriented side and in the second game of this year’s Challenge Cup, the Spirit decided to hyper-charge that possession style as a way to specifically stifle the Courage.

Most teams — Washington included — spread the field when working the ball out of the back, splitting their center backs and pushing their outside backs wide. But on Wednesday, the Spirit’s center backs often dropped as deep as their own six-yard box in an effort to draw the Courage forward and negate their press. 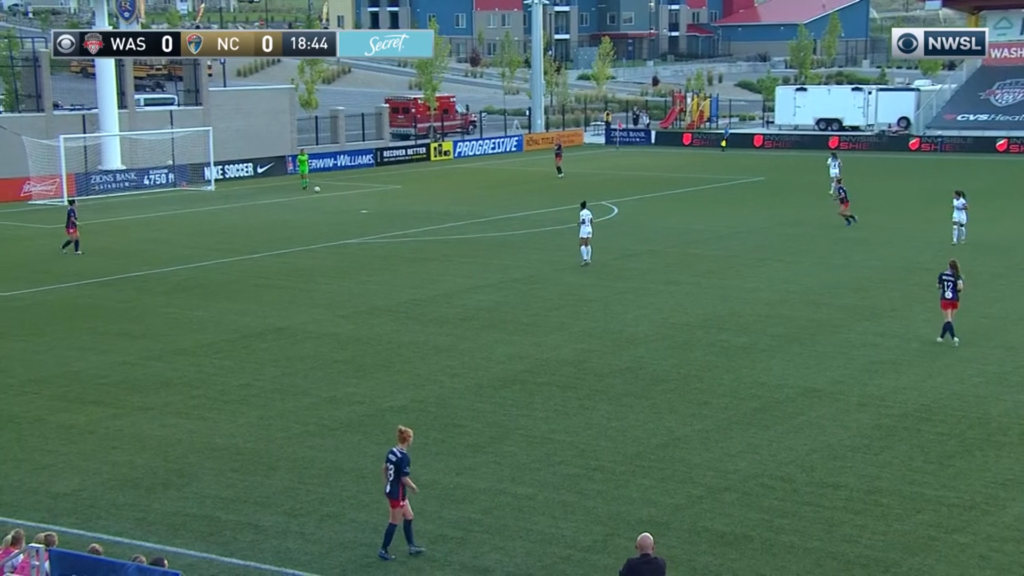 With Sam Staab and Paige Nielsen deep and wide, and with Tori Huster hugging the near touchline and Tegan McGrady doing the same on the far side, North Carolina’s forwards and attacking midfielders struggled to apply pressure because they couldn’t press in numbers. The massive gaps between the Spirit’s defenders gave them ample time and space — something rarely seen while playing against the Courage — to work the ball around and wait for passing lanes to open up to midfielders Andi Sullivan and Meggie Dougherty-Howard.

The low-lying possession also kept Washington’s outside backs deeper, providing an added benefit. Because North Carolina doesn’t play with any wide attackers, their opponent’s outside backs often drift forward into the space — as they are taught to “take space” from a young age. However, against the Courage, this is a bit of a siren song, because all it does it open up space for North Carolina’s Lynn Williams to make diagonal runs. But by staying home, this space was largely negated, especially early on.

Through 45 minutes, Washington’s strategy worked. Although there were still a couple of times that Sullivan gave away possession deep in her own end, the teams went to the locker room at the half tied 0-0. And when North Carolina finally broke the deadlock in the 50th minute, it didn’t come off a failure of tactics, it was simply a missed defensive challenge.

Whether the strategy will work if the two teams meet again in the knockout rounds is an unknown. Neither team started their best XI, with the Spirit resting Jordan DiBiasi and the Courage notably not starting three of their usual midfielders. However, the deep-lying possession tactic should also wear a team out by forcing them to chase, and the Courage bringing three all-stars off the bench at the half negated that potential advantage.

Four days later, it was Chicago’s turn to take on North Carolina and both sides played close to their first-choice XIs.

Early in the match, it didn’t appear that the Red Stars had made any specific adjustments for the Courage. The formation remained a hybrid between a 4-3-3 and a 4-4-2 diamond, with Yuki Nagasato often dropping a bit deeper in the No. 9 role than the rest of the front line to occasionally create the diamond shape.

North Carolina’s press smothered Chicago’s midfield through the first 20 minutes of play, creating constant 3-v-1 opportunities to strip the Red Stars of possession and start attacks from deep in Chicago’s half of the field. 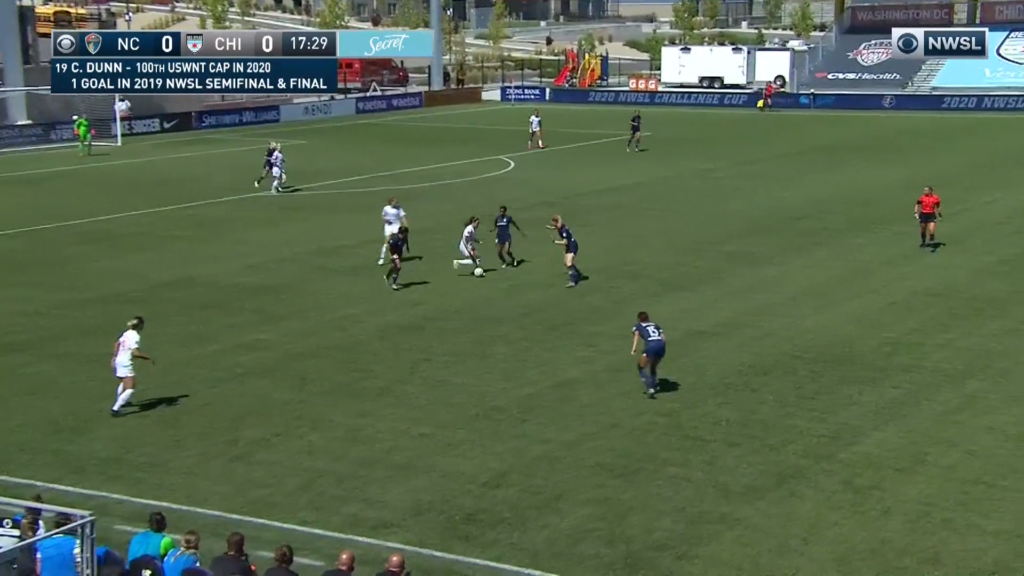 As the game wore on, the Red Stars did start to create some more fluid midfield combinations, but their most promising chances still came primarily through counterattacks with long passes out of the back. But midway through the second half, the Red Stars did appear to change tactics by matching the Courage’s box midfield with a box of their own. Vanessa DiBernardo pushed high and looked to be playing parallel to Nagasato as dual No. 10s while Morgan Gautrat and Danielle Colaprico stayed deep as the team’s dual No. 6s. 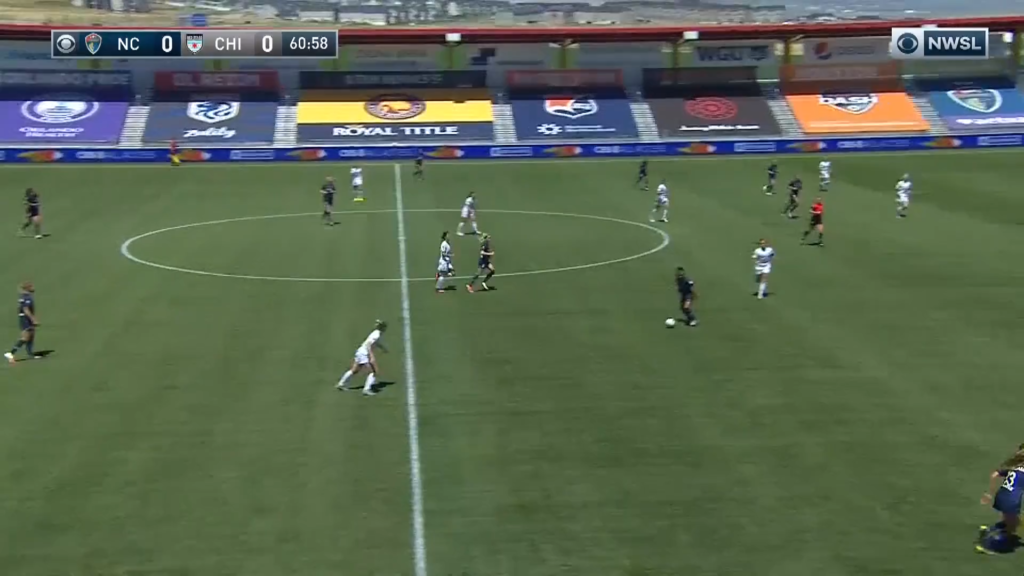 Late in the half, as Chicago began to make mass substitutions, the tendency became even more pronounced — making it look more like an intended tactic than a run of play happenstance.

North Carolina ended up winning each match in the end, but both games also showed that some NWSL coaches are beginning to recognize that beating the Courage will take some creative thinking. Washington gave up their first goal off a defensive error in the second half and Chicago lost 1-0 on a set piece in the 81st minute. That fact alone will make them think that they may be on the right track.

Coaches often talk about playing “our game” rather than focusing or adjusting to their opponent. However, North Carolina has repeatedly shown the flaw in that thinking over the past few years. If anyone other than the Courage want to take home the Challenge Cup, it’s going to take some creativity — and a little luck — to do so.

Kickin’ Back with Sam Mewis and Lynn Williams

‘Nobody makes it to this league by being mediocre’: Sharples, Davison on coming together, creating their own moment
Racing Louisville FC announces itself to the world amid an unforeseen 2020 calendar