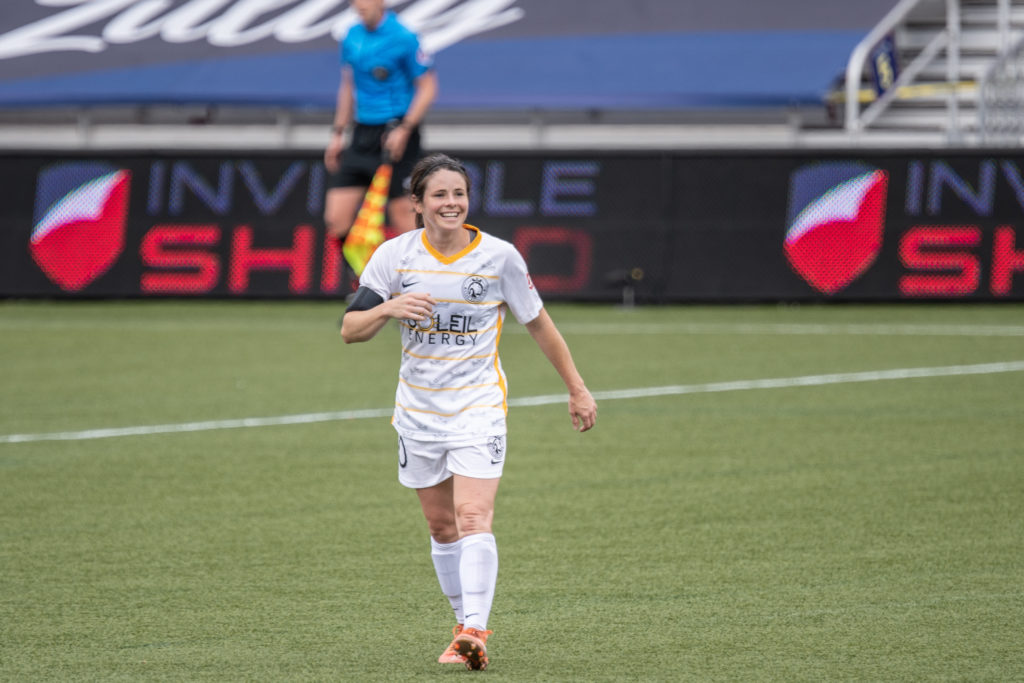 Diana Matheson shows there is a road back from a torn ACL. (Photo Copyright Lucas Muller)

On the day that North Carolina Courage rookie Ally Watt announced she had torn her ACL, several fellow National Women’s Soccer League players offered the first-round pick a glimpse into the future. Watt had been on the field for only about 10 minutes in Saturday’s NWSL Challenge Cup opener against the Portland Thorns when she took a bad step near the goal post and immediately went down. She never regained her feet and was removed, in obvious distress, via stretcher.

On Tuesday, Watt and then the Courage announced the torn ACL. Her NWSL Challenge Cup is obviously over. If her recovery goes extremely well, she could challenge to be back on the pitch for what will hopefully be a normal 2021 season.

Hopefully Watt was able to pay enough attention on Tuesday to see the glut of players returning to the field after lengthy stays on the shelf through injury. Diana Matheson did not have a torn ACL — this time — but she did miss all of 2019 after foot surgery. At 36, no one would have blamed Matheson for moving on from soccer, but there she was on Tuesday not only dressed but starting for the Utah Royals. And then an amazing thing happened. Matheson sneaked her way near the Houston Dash goal and was there in the ideal moment to finish an Amy Rodriguez cross. The native is Mississauga, Ontario had not scored an NWSL goal since June 2, 2018.

And in case you thought a 36-year-old coming off surgery was easily tired, there was Matheson practically wrestling with Dash goalkeeper Jane Campbell — who may literally have a foot of height on Matheson — to take the ball and return it to midfield after Vero Boquete’s goal cut the Dash lead to 3-2. The Royals did eventually tie the match, just after Matheson came off in the 89th minute.

It has been a fascinating journey for Matheson, who along with Christine Sinclair is the only Canadian to be subsidized to the NWSL by the Canadian Soccer Association for all eight seasons (when including this Challenge Cup as the 2020 season). And while this recovery was not from an ACL tear, she is familiar with the process. Her 2016 Olympic bronze medal came after just barely recovering in time to make the team.

Also in the Dash-Royals party was Houston midfielder Veronica Latsko. One of the gems of the 2018 draft, Latsko’s second season ended in May when she tore her ACL in training. Tuesday was her first NWSL match back but she had played in Australia for Sydney FC.

Speaking of Australia, that’s where Taylor Smith was near the end of 2018 when her ACL went while playing for Newcastle Jets FC. Smith getting hurt when she did put her in a particularly tough situation. Earlier in 2018 she was famously yanked from a U.S. game in the first half by then-coach Jill Ellis. Smith did not appear for the U.S. again that year (and still has not) and consequently was about to be dropped from the list of players subsidized by U.S. Soccer.

That meant the Spirit had to offer her 65% of what U.S. Soccer were paying her. With a freshly reconstructed knee ligament meaning no 2019 season, the Spirit declined. The Reign stepped in though and gave Smith a two-year contract. That meant a place to rehab during 2019 and to play in 2020. She finally made her Reign debut in the 57th minute of Tuesday night’s 0-0 draw against Sky Blue, replacing Bethany Balcer.

Eighteen minutes after Smith checked in, Jasmyne Spencer followed her. Spencer had torn her ACL in an April match for the Reign last season and soon after joined Smith in the rehab club. It was almost a storybook return for Spencer when she got played in behind the Sky Blue back line, but Kailen Sheridan spoiled the chance, and the match ended 0-0.

Not all players have been as fortunate. Alyssa Mautz of the Chicago Red Stars was about a year out from ACL repair and hoping to play in the NWSL Challenge Cup. And then she tore her ACL again. Caprice Dydasco previously tore an ACL during the 2016 NWSL Championship and suffered the same injury training with Sky Blue this spring. They will both be out for the Challenge Cup and beyond. And Sky Blue’s Madison Tiernan suffered an ankle sprain that will keep her out of the Challenge Cup after missing all of 2019 with a torn ACL.

Mandy Freeman, who missed 2019 with a ruptured Achilles tendon, did not feature in Sky Blue’s opening match but is available and expected to play.