With U.S. sports spotlight to themselves, NWSL players plan acts of solidarity 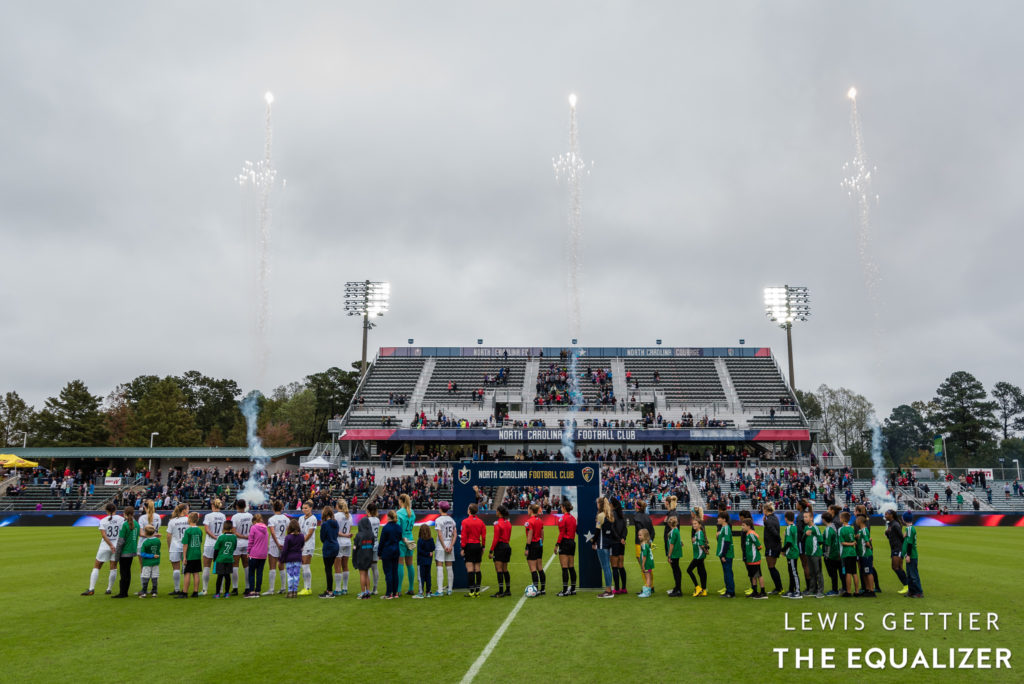 In a show of solidarity with the Black Lives Matter movement, National Women’s Soccer League players told The Equalizer they plan to wear Black Lives Matter t-shirts during warmups and to demonstrate pregame and possibly during the national anthem for the opening games of the Challenge Cup, which begins on Saturday in Utah. The league also plans to follow suit with signs around Zions Bank Stadium supporting the movement.

“It was imperative that we kind of come together as a league and hear what everyone was wanting or needing in terms of putting out this message that is intentional, inclusive and is powerful,” North Carolina Courage defender Merritt Mathias told The Equalizer. “I think with everything that’s been going on, it has been definitely the voices of a lot of players.”

Orlando Pride forward Sydney Leroux, whose team will not compete in Utah due to several positive COVID-19 tests earlier this week, played a key role in developing an idea to support the movement when the league resumed play. It was met with wide support from players league-wide.

Multiple active players, as well as NWSL Players Association co-executive director Brooke Elby, joined Leroux and Mathias over the past two weeks to further develop their plans. The passion of the players, which many have displayed on social media since the killing of George Floyd last month, led to the Players Association creating a subcommittee to achieve this goal.

“[At] the Players Association, we feel strongly about this, [and] that we fully support every single one of our members,” Utah Royals defender and PA vice president Rachel Corsie told The Equalizer. “There’s a number of players who are extremely passionate about it and being very active.”

Leroux and Mathias spoke to commissioner Lisa Baird about their planned acts of solidarity, and Baird was supportive.

“The league has done a great job and has been on board and Lisa Baird has been willing to jump on a call and talk through some things and really push for the things that we were asking for,” Mathias said. “We have a platform to really just build and grow upon this and I think for Lisa, she recognizes that.”

The players’ platform is, in some ways, larger because the NWSL be the first team sports league in the United States to return since the coronavirus pandemic stopped play in March. There has also been a shift in attitudes which encourage athletes and other public figures to speak about racial inequality. Both Corsie and Mathias acknowledged that the platform empowers them further to use their platforms.

“We’re having conversations like this today,” Corsie said. “People go home and discuss this with their families. That’s how it spreads, hopefully effectively throughout wider communities and I think by doing it within our sport where there is a wider audience, there is that platform. … If you look at the players we have in this league and the people involved in professional sports all over this country, how that can now spread and impact so many others outside of that, it should be vast and that’s hopefully going to be something we can continue. I know that’s part of what we aim to do.”

Kickin’ Back with Nicole Hercules

The actions planned to open the Challenge Cup are only the start to players’ support of the Black Lives Matter movement. Mathias noted that the league and the sport have areas which need improvement, particularly in positions of power, where only a small percentage of people of color hold executive roles. Conversations are ongoing about further actions players and the league can take; Mathias said these conversations have “enlightened the need for probably a coalition within our league” that would support communities of color and the LGBTQ+ community, among others.

“[We can] leave this for the next generation of players to continue,” Mathias said. “We do have a platform to do that, and we do have incredible markets across the United States. I think now, once we get this right hopefully and expand and start having a bigger picture and bigger discussion and something that can really build into something sustainable.”

The immediate goal, more than a month after protests began in the U.S. and continued around the world, will be to continue the conversation.

“By being silent, that’s actually part of the problem,” Corsie said. “The most important principles with this current movement [are] that we keep it going. I think we need to make sure that it doesn’t fall away, that it doesn’t just become diluted in conversation. I think we need to make sure to continue to prolong this message for as long as we can, to keep its impact, to keep influencing as many people as possible, to keep reaching as many different people as possible.”

U.S. Soccer repealed the anthem policy, but regaining trust will be much more difficult

Krieger says she is one of the Orlando Pride players who tested positive, then negative
Hailie Mace is an X-factor on a fully established Courage team