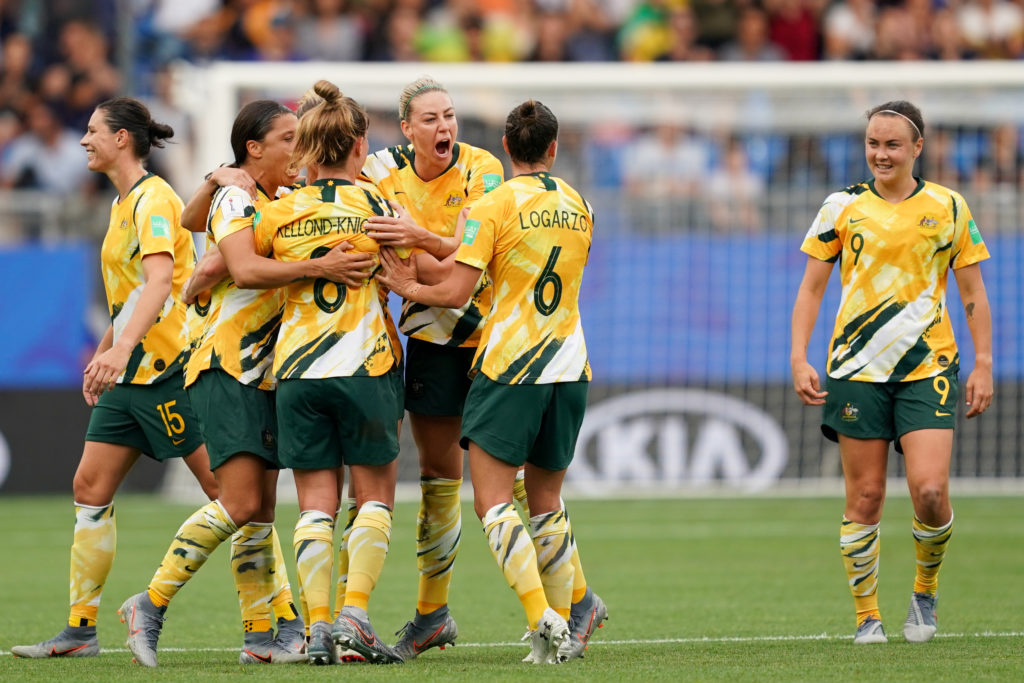 A process which began with nine countries vying for the chance to host the world’s biggest women’s soccer tournament ended Thursday with Australia and New Zealand winning the rights to co-host the 2023 World Cup. After dwindling down to two prospective bids, the FIFA Council voted 22-13 to award Australia and New Zealand’s joint bid the hosting rights over Colombia.

World player union FIFPro hosted an event with Danielle Slaton, a former U.S. women’s national team Olympic gold medal champion, inviting players from around the world to discuss the tournament, which now has a host. Representing Australia was Elise Kellond-Knight, while Ali Riley joined the call for New Zealand.

Kellond-Knight said that being awarded the bid was “immense.”

“I don’t think anyone quite believed it was going to happen. It was like everything was falling into place for the last couple weeks… It’s going to be phenomenal. It’s going to be a world first, having it in the southern hemisphere.”

Riley, a captain of the New Zealand national team, said she broke down when the announcement was made, echoing Kellond-Knight’s statement that she didn’t believe it would happen.

“It could have easily been the other way. I feel for Colombia,” Riley said. “Especially as New Zealand, we’re desperate to have this tournament. It can help with the development of the game in New Zealand. I know Colombia was feeling that, too… We’re going to make this a tournament that really elevates our game and puts women’s soccer at the forefront of everyone’s mind. I want the Colombians, and any others who aren’t hosting, to feel like their voices are heard.”

Meanwhile, Gaitán, who admitted she was a “little down” about the decision, applauded the two nations on the victory. “I’m pretty sure Australia and New Zealand are going to do an amazing job… I hope to be there to lead the moment with you guys.”

For Australia and New Zealand, having quality opponents on their home soil is going to be key in growing the sport.

Riley said that New Zealand doesn’t get the opportunity to play many matches in the country. Attracting teams to fly all the way to the southern hemisphere, she said, isn’t the easiest task.

“Those supporters that you don’t know, they’re going to feel like family, they’re going to be part of us,” Riley said. “This will be the chance of a lifetime to connect with these fans, these little girls who have sent messages and followed us for all these years. We barely play any home games, so this is so epic.”

Meanwhile, McLeod, who featured as the starting goalkeeper for Canada in 2015, said that playing in the world’s biggest tournament on home soil is “unlike anything else. To see that many Canadian flags in front of you… you know you have a team behind the team.”

Growing the game of soccer

Gaitán had high hopes for Colombia to host the tournament. However, even though the South American nation will compete for a spot in Australia and New Zealand, she hopes that being in the final two will put pressure on Colombia and the federation.

“We had this big hope to host the World Cup,” Gaitán said. “We knew it would be additional pressure for the federation, the league, for everyone to focus on women’s soccer. We’re trying to do everything in our wish to improve our game. But we really need the help from the government, journalists and everyone to achieve where we want to be. We’re just trying to get these little steps to go forward.

“We have to take advantage of this moment, where everyone is talking about women’s soccer. We feel that we have the talent and energy. That little part, that little mind-changing, is going to mean everything for us.”

Kellond-Knight is hoping that the women’s game can grow in Australia, too — especially with the W-League. Kellond-Knight said there is no home-and-away series, and she wants the league to be able to sustain that.

“Flying to and from every game is a massive expense. It’s an expensive league to run. They need to figure out how to fund it long-term. It’ll be interesting to see where it goes to; everyone has different opinions about it. It’s come a long way,” she said.

Riley was at the forefront of pivotal moments for the New Zealand national team, especially when they achieved equal pay with the men’s national team. Riley champions equality and also credited her teammate, Abby Erceg, for making a bold stand, too.

“We had Abby Erceg retiring on the grounds that we weren’t getting enough support. It was a big decision,” Riley said. “We already had very similar contracts, but they became the same and we became a unified front. It’s an important statement to be made by the federation for other sports, especially women’s sports. It made headlines all around the world. We do have equal standards, but we still want to push those higher for both teams.

“We’re pushing for things together as a unified force.”

Kickin’ Back with Ali Riley

Riley also had an idea for FIFA in regard to the naming of the World Cup.

Riley also called on men’s national team players to voice their support for equality. “You don’t want to feel like the damsel in distress; that we need the men. But, it’s not something to be ashamed about. We can use their voices and their platforms.”

McLeod agreed, saying that, without men’s national team players, “we can scream and ask for more, but we need their support.”

Finally, that equality stretches to viewers at home. When asked how to make the 2023 World Cup the best sporting event of all time, McLeod said that accessibility is a must. Kellond-Knight hastily agreed, saying she couldn’t access matches from her hotels during last summer’s tournament.

“If they can get as many people watching as possible, that would make it an exceptional World Cup,” McLeod said.