The Lowdown: An early analysis of the NWSL Challenge Cup 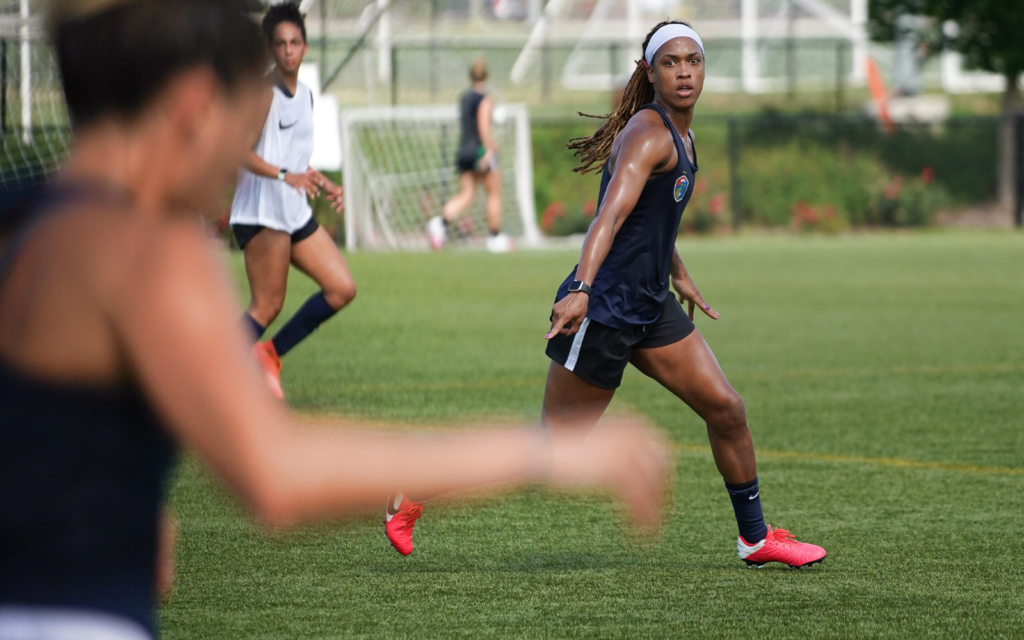 The National Women’s Soccer League is on the way back. As America and the world continue to navigate through the most uncertain time most of us can remember, the NWSL will return to the field at the end of June with a 25-game tournament staged exclusively in Utah. On Monday, the league conducted a blind draw to determine the match-ups for the NWSL Challenge Cup. The action begins June 27 when the Chicago Red Stars take on the Orlando Pride, and the North Carolina Courage battle Portland Thorns FC. The preliminary round concludes July 13.

There are many layers to discuss and analyze, several of which have been covered on this site, and there are several others still to be worked out. This column will be a straight analysis of the draw where each team was handed four opponents with game dates.

I’m also aware that not all players have made their decisions about whether they will be participating in the event. But rather than speculate, all teams will be treated as if they will have their full complement of players. We still have a few weeks for adjustments and other analysis.

All that said, here’s a team-by-team look at what could very well be the only NWSL soccer we see in 2020.

Let’s get one thing straight. The Courage are the best team in the NWSL and, with all three of their playoff competitors having undergone significant change of one form or another, a full and fresh season was likely to bear that out. The condensed format obviously allows for much more deviation than 24 games over six months. But could it also make the Courage that much more dominant since they return a very familiar group?

Only one of the Courage’s four opponents are playoff teams from last season, and that is the Thorns, who made some significant changes and will be relying on rookies Sophia Smith and Morgan Weaver to help shoulder the scoring load. That might make for a well-hyped opener, but it could be daunting for a pair of rookies.

If there is a question mark for the Courage, it’s at right back, where Merritt Mathias tore her ACL last fall and replacement Heather O’Reilly retired. 2019 draft pick Hailey Harbison was one player that had eyes on the spot, but she missed her entire rookie season and will have an uphill battle to be ready to jump right into league competition.

Are the Red Stars a stable continuation of the team riding a league-record, five-year streak of making the playoffs? Or are they a team in transition having lost Sam Kerr, who scored 34 of their 79 goals over the last two seasons (plus their only playoff goal)?

I’ll go with a hybrid of the two. There is definitely a Red Stars way which has proven extremely successful over the years. And I believe the club brought in enough different strikers that they would likely figure out how to score goals by the end of the season. Of course, they don’t have that long but they do have three games against teams that almost completely revamped their defenses before finishing up against Sky Blue.

As John Halloran pointed out on our recent podcast, the Red Stars are also notoriously slow starters, but even if that happens again, eight of the nine teams will be moving on to the knockout stage and it’s hard to imagine the Red Stars not being one of them.

The Thorns were a bit of a mess at the end of 2019 and they responded by making some sweeping changes. While many longstanding pieces like Christine Sinclair, Tobin Heath, and Emily Menges remain, the team shipped out several internationals and traded away Emily Sonnett, eventually winding up with the top two picks in January’s draft.

Portland used those picks on Sophia Smith and Morgan Weaver as they attempt to move more of their scoring up to the front lines. When Lindsey Horan was MVP in 2018, she scored 13 times, but she slumped in 2019 and there just wasn’t enough up top to offset Horan’s lack of productivity. In a perfect world, Horan rebounds and the Smith/Weaver combination develops and sticks around for a while. For this event, the question will revolve around how quickly Smith and Weaver can develop, especially considering they will be asked to score — the most difficult proposition for a young player.

The opener against the Courage will be tough and the finale against the Reign will take the league’s most important rivalry to a new, odd place. If these were the Thorns’ first four games of a season, they could be ticketed for an even start while the rookies get their feet wet. It will be interesting to see how they respond if they emerge from the Courage match without a point.

The Reign are another team that probably needed some time to settle in considering they have a coach, Farid Benstiti, who is not only new to the team but new to the league and country. It is likely that Benstiti’s long-term agenda was to build the team around Jessica Fishlock, who tore her ACL early last summer. No matter how good Fishlock is upon her return — and we all know how good she is — the notion of playing seven matches in 27 days won’t be easy. The best path for the Reign will likely be to rack up enough points early so they can give Fishlock a break at the end of the preliminary round.

Benstiti will also have to follow in the footsteps of Vlatko Andonovski, who seemed to put just the right touches on what was sometimes an erratic roster. There is certainly talent there, but I’ll put the Reign up as the most difficult club to figure out heading into this event.

The club also learned recently that Steph Catley will not be returning in 2020, but that could be offset by a return for Taylor Smith.

The Spirit might be the team with the most to lose if the NWSL Challenge Cup turns out to be the only soccer in 2020. They took major strides last season on the wings of a very good group of young players, and were well positioned to take another step forward in 2020. And they could be better than all four of the opponents they drew for the preliminary round.

By far, the toughest game will be against the Thorns, who will be on a full week of rest while the Spirit will have played four days prior (an unfortunate consequence of having an uneven number of teams).

The Spirit are a young team that could be well-suited to push through the tight schedule. Or they could start 2020 in neutral, off what they did last year. They should get to the knockout round without much of a hassle, though, and should be considered contenders.

The Royals have been steadfast that the changes they made over the winter were not intended as a rebuild. But even the most optimistic about the club must concede that there will be major transition that will take time to get figured out. Much of that transition will be in back following the departure of Becky Sauerbrunn. On the bright side, the World Cup last year was a window into life without her. More realistically, there could be some growing pains trying to keep opponents at bay.

Up front, the Royals not only have scorers, they have two — Christen Press and Amy Rodriguez — who are more than capable of changing a game on a dime, even on nights they’re not playing particularly well. If the Royals are going to be successful, they might need to make that happen a time or two.

New head coach Craig Harrington was hired away from the Red Stars and will face off against his former boss, Rory Dames, on the Fourth of July. And if the Courage are through to the next round heading into the finale — and please find me even one person who thinks they won’t be — perhaps North Carolina will run out a team the Royals can pounce on.

The Dash are another team that likely would have gotten better with the benefit of the full 24 matches. The team jettisoned the two all-time appearance leaders, Kealia Watt (nee Ohai) and Amber Brooks, plus Sofia Huerta. But the Dash won’t have that luxury of a long season, so they’ll have to make the best of it over the four games they have. They will have a few extra days to prepare as they’re the odd team out of the first round of matches.

That brings us to their opener against the Courage, a team that has absolutely rolled them more often than not over the years. But second games can be tricky after long layoffs. Could the Dash catch the Courage and surprise them to get off to a good start? Or will they be even further behind, having not had a match to get their legs under them? (We’ll probably make that call for them after we see the match.)

Either way, this is a tough slate of games for the Dash, which includes the reverse scenario against what will be a fully-rested Sky Blue side four days after the Courage game.

I’m looking at Megan Oyster as the key to the Dash’s success. If she can organize the defense to become stingier than we’re used to, perhaps Houston can hang around and steal some points.

Will NWSL Challenge Cup format level the playing field or widen the gap?

If I were writing a full preview for a full Sky Blue season, one of the angles would be that Freya Coombe has a lot to prove as a head coach. That’s not to say she won’t be good at it, just that there is no track record whatsoever of having done so. So, isn’t it interesting that her first match on the sidelines as the full-time manager will be against Farid Benstiti, in his first game in the NWSL in any capacity? Benstiti’s resume dwarfs Coombe’s, but there is almost always a learning curve for U.S. soccer leagues.

After that come the Dash and Pride, and hopefully from those three matches enough points that they won’t have to sweat the Red Stars game to close the preliminary stage.

There is no doubt Sky Blue will be better in 2020 than they were in 2019, and even though their celebrated move to Red Bull Arena is on hold, the mood and vibe around the team could not be more different to what it was barely more than a year ago. They are dark horses to finish in the top four if they can get the new personnel moving in lock step right away. And is there a player better suited to the quasi-World Cup format than Carli Lloyd?

With that as a backdrop, it’s hard to look at any game and think the Pride would have an advantage. But starting off against three of last year’s four playoff teams over a nine-day stretch is just an unbelievably bad break handed the Pride from the draw gods.

Orlando should be better. Emily Sonnett and Ali Riley will make the defense better. Full seasons from Claire Emslie and Sydney Leroux can only help. Skinner was tickled to be able to select Taylor Kornieck at No. 3 in January’s draft, and she’ll likely play an important role.

Unfortunately, this is a team that required a mentality makeover as well as a roster overhaul. It better happen quickly. The Pride will be fortunate not to go into the Sky Blue match scrambling for their first points in a desperate attempt not to be the one team that goes home before the knockout stage begin.