NWSL commissioner Lisa Baird revealed part of the 25-game tournament schedule live on CBS Sports HQ on Monday, drawing teams into slots — numbered 1 through 9 — with predetermined matchups and schedules. Per CBS host Sherree Burruss, the slots were computer-generated at random and nobody saw the envelopes ahead of time.

Each NWSL team will play four preliminary-round matches, with eight of the nine teams advancing to the quarterfinal stage. The preliminary round will also feature another rivalry on July 12, when OL Reign face Portland in a Pacific Northwest derby. All preliminary round games, plus the semifinals, will be played at Zions Bank Stadium in Herriman, Utah. The semifinals and final will take place at Rio Tinto Stadium in Sandy, Utah.

The top eight teams will advance to the quarterfinals of the tournament, which is set for Friday, July 17, and Saturday, July 18. The semifinals and Challenge Cup Final will be held on Wednesday, July 22, and Sunday, July 26, respectively.

The Chicago Red Stars drew the No. 1 slot and will feature in the other opening-day game on June 27, against the Orlando Pride. Either the Chicago-Orlando or the Portland-North Carolina match will be featured on CBS, marking the first time in U.S. television history that a women’s soccer club match will be featured on broadcast television. Portland and North Carolina played in back-to-back NWSL Championships in 2017 and 2018, splitting the results.

The full schedule for the preliminary round is as follows: 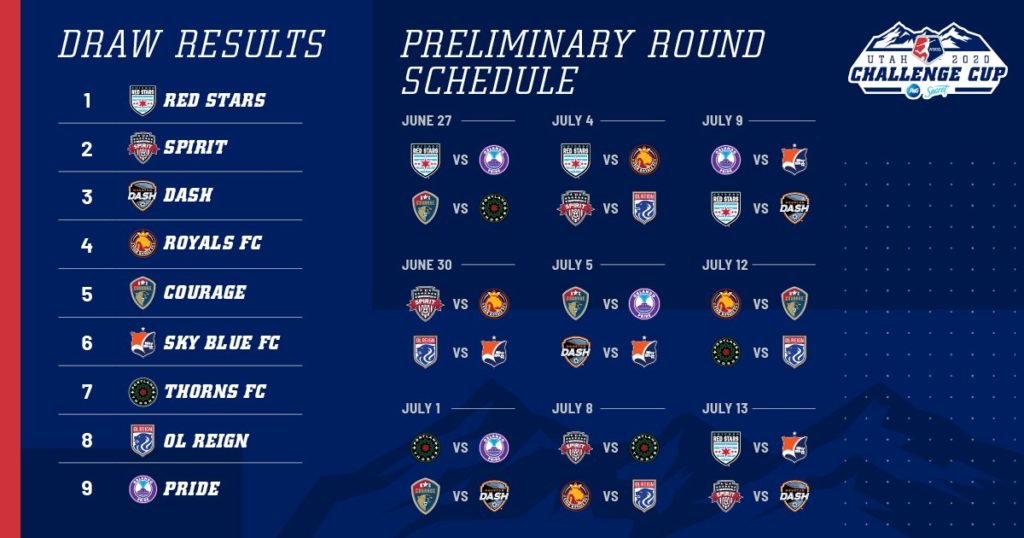 Monday provided a first look at how CBS will cover the league to begin its three-year media rights contract. CBS All Access will air all 25 games of the 2020 NWSL Challenge Cup, with the opening game and championship on CBS. The rest of the matches will be replayed on CBS Sports Network.