The Lowdown: A chance for the NWSL to find its fancy hat 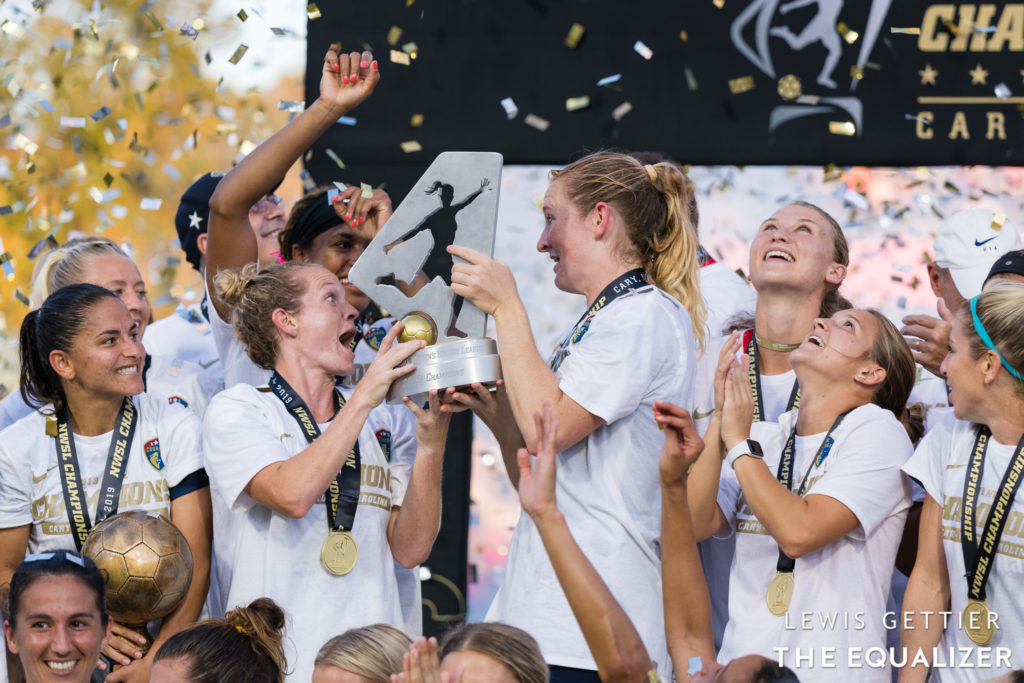 Ever since the National Women’s Soccer League launched in 2013, I have made no secret of my belief that the league should be building a signature event out of the NWSL Championship. That viewpoint was reaffirmed last weekend by, of all things, a horse race. Actually, two horse races. One that happened, and one that did not.

Bear with me on this one and know that I would much rather be writing about Week 3 in the NWSL season instead of this.

The CliffsNotes version goes like this: The Kentucky Derby was postponed as one of many casualties of the COVID-19 pandemic that has the sports world on its knees. Even before Kentucky racing was shuttered, Churchill Downs made the decision to postpone the race rather than run it without the crowd that regularly swells to over 150,000. And so, last weekend, the first Saturday in May came and went without America’s signature horse race for the first time since World War II. (The race, tentatively scheduled for September 5, has been run every year since 1875.)

In response, Oaklawn Park in Arkansas moved their traditional April race for 3-year-olds back to May 2 in an attempt to fill the void left by not having a Kentucky Derby. The Arkansas Derby, normally a warm-up race for Kentucky, took center stage. So many horses were entered that the race split into two divisions. Both of the divisions were won by Bob Baffert, the most famous name in training.

It was not the same, though. Even on television, the lack of pomp and circumstance was notable for its absence. Conducting races at a soulless racetrack — Oaklawn Park is open for business but not to the general public — was a far cry from the madness of a usual Derby day. Annual segments, in which Tara Lipinski and Johnny Weir are decked out in their eccentric outfits as they highlight the glitterati in attendance, are not meant for actual racing fans like me, yet they were missed. The latest celebrity picking a horse they probably hadn’t heard of three days earlier? Not for me. And yet it was missed.

So, what does this all have to do with the NWSL Championship? Maybe nothing, but maybe everything. The desire to have the NWSL Championship grow into something bigger and better represents a desire to have it begin to resonate with the public sports consciousness. You may have never watched a Kentucky Derby, but you likely know about that silly tradition with the fancy hats. If you have never watched an NWSL Championship, you probably know… well, nothing about the event at all. Yes, the championship game of domestic women’s club soccer spotted the Derby almost 140 years, but that is not a good reason to sit idly by.

That’s not to say the NWSL Championship hasn’t made any progress. For those of us who were in Rochester, New York, for the first one in 2013, that seems like multiple lifetimes ago. In the years since, the event has moved to the pre-determined site format allowing fans better opportunities to travel to the match. A Media Day instituted in 2016 does not resonate with fans, but they likely benefit from the additional content that emerges from it. The last few years have seen fans invited to see the teams train the day before the match. The only problem with the open training, of course, is that it has been announced too late for anyone to plan ahead and is therefore reduced to anyone already planning to be in the host city and available at the right time.

There needs to be more. There need to be parties and signage and a trophy on display around town. A formal supporters’ summit would encourage more travelers from around the country. In short, the NWSL needs to find its fancy hat as a stamp to put on its signature event.

How much will pandemic stifle the NWSL transfer market?

It’s probably not the best time to be musing about the NWSL Championship, when the league is having a difficult enough time getting to opening day. And who knows with what veracity Americans will travel for sports when most of us haven’t been much farther than the store for the past two months. But sports and travel are going to be back at some point, and those who adapt to the new normal the quickest and the best will surely thrive.

Fine-tuning the NWSL Championship probably won’t be a level-one priority. But once league play resumes and things stabilize, it absolutely should be. If you’re a racing fan, you can tell when the Derby is coming. You can feel it in the air as spring arrives. If you’re a baseball fan in the Northeast, the crisp fall air tells you it’s playoff time. The NWSL Championship needs to find its niche, something never more evident than it was last weekend when one of the most famous days on the American sporting calendar came and went without its signature event.

— To close the book on the Kentucky Derby, the event is so big in Louisville that when I asked the president of the Louisville USL and NWSL clubs, Brad Estes, about Derby week, he basically said both clubs will clear out for the week and leave the stage to the horse race.

— Kadidiatou Diani signed an extension to stay at Paris Saint-Germain, ending months of speculation that she would be joining the Portland Thorns on allocation money. It is unclear whether the decision was based on the COVID-19 crisis, but I know it would take a lot for me to travel to a foreign land to work these days if it weren’t absolutely necessary.

— NWSL clubs are permitted to conduct individual workouts provided they comply with federal, state, and local guidelines. This is neither an insignificant step nor a sign that the league is moving close to getting the 2020 season underway. It’s news, though.

NWSL Live: Who was the unsung hero of the 2019 season?
The Equalizer Podcast: Next 23