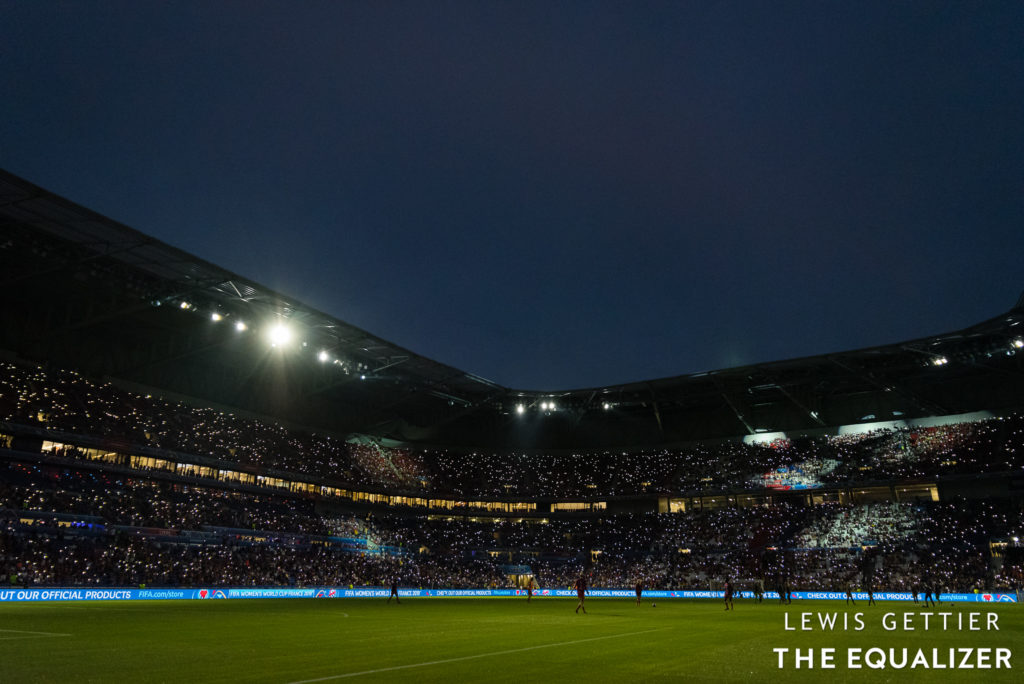 World soccer players’ union FIFPRO, following a recent call to stakeholders to support women’s soccer against the “existential threat” to the game presented by the COVID-19 pandemic, on Thursday released a 57-page report detailing the needed areas of improvement for the sport.

The report, titled “Raising Our Game,” explains the ways in which women’s soccer is proving its commercial value and beginning to professionalize, but also makes clear that “adverse labour conditions still plague the game.” The detailed study, done in collaboration with various stakeholders and KPMG Football Benchmark, lays out the needed path forward for more investment and improved player rights in the professional club and international environments.

Among the key points reiterated throughout is that the path forward must be innovative and unique; treating women’s soccer like the “little sister” of the men’s game is not an answer.

The report reads: “With women’s football in the nascent stages of global growth, the opportunity exists to get ahead or even ‘leapfrog’ these major issues to create a working environment whereby players are not exploited, their rights are valued, and they are accorded full respect.”

The report calls for FIFPRO and FIFA to take joint responsibility in implementing global minimum standards which are based off the International Labour Organisation’s system, an acknowledgement laid out explicitly in FIFPRO’s report: soccer players are laborers just like so many others in the world. The ILO’s standards are “aimed at promoting opportunities for people to obtain decent and productive work, in conditions of freedom, equity, security and dignity. Meeting these labour standards and creating the conditions of work that comply with national and international standards is essential to players in the football industry and the protection of their rights as athletes.”

FIFPRO laid out 12 categories each for minimum standards in professional women’s soccer and international tournaments, many of which overlap. Fair and regular pay, right to organize, non-discrimination, health, and safety are all staples of what is needed to move the women’s game forward. 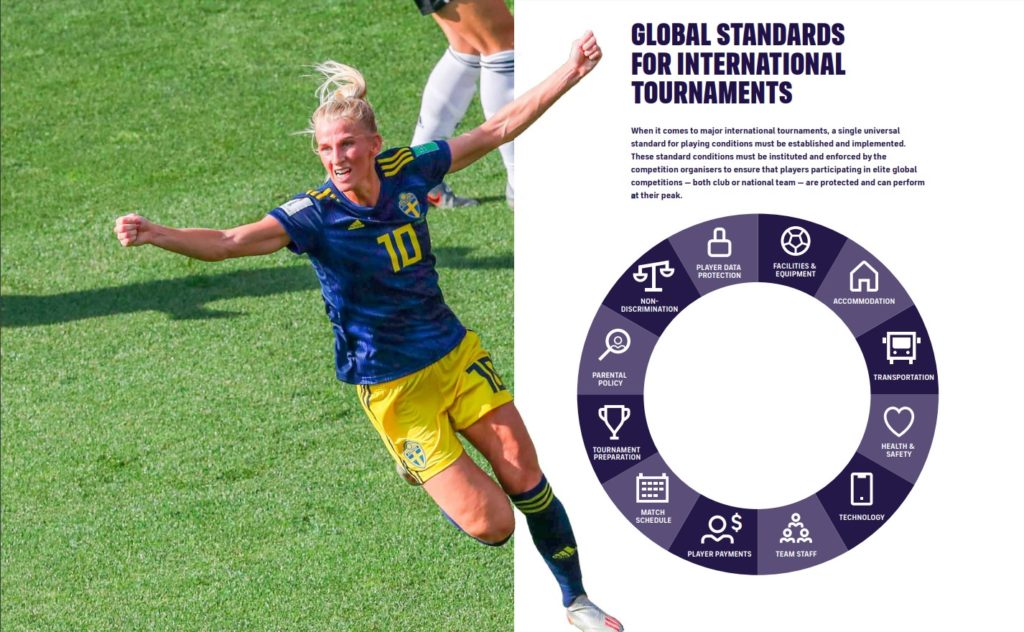 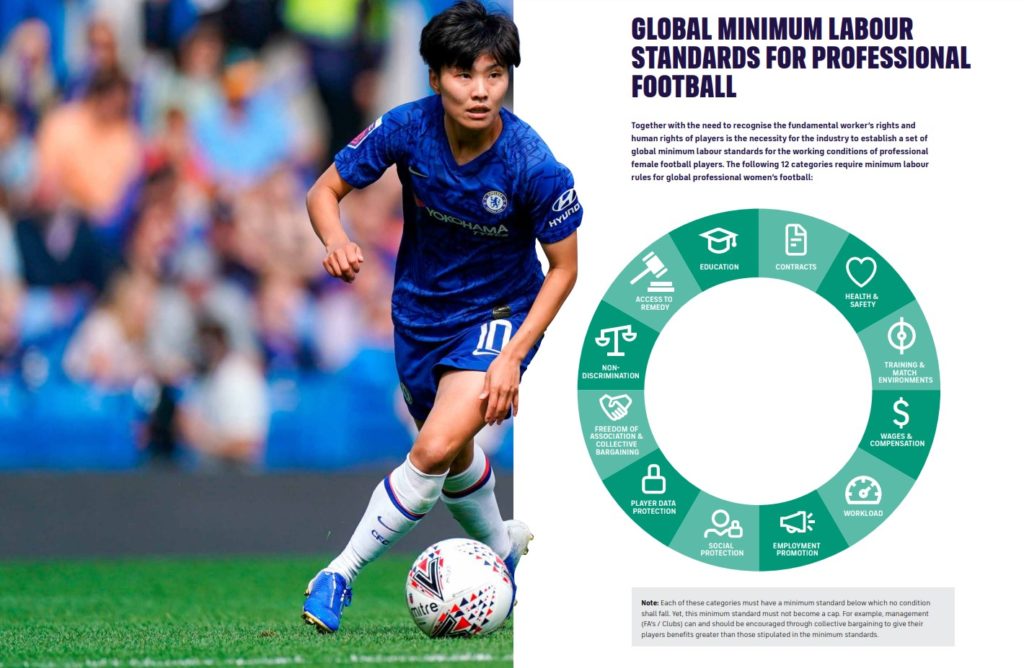 There remain concerning stories about federations globally neglecting their women’s programs. One example offered in FIFPRO’s report cites a lost generation of players in Cyprus, where women’s players were quitting the game in their 20s because their federation, until recently, wouldn’t enter the team into World Cup or European Championship qualifying, explaining to the players that they weren’t good enough.

The 2017 FIFPRO Global Employment report revealed that written contracts are rare in the women’s game. Some clubs offer alternative means of in-kind compensation to avoid paying a player, and most players are paid less than $600 per month after tax. That number rose 68% in the latest survey.

The most troubling aspect of the report is how much remains unknown and thus unrealized. There is a dearth of business data in women’s soccer due to longstanding business neglect. FIFPRO admits at the outset, “Crucial financial and operational data simply lack availability and accuracy.” How can any entity — professional club, federation, sponsor, or broadcast partner — know the value of something if it cannot accurately be measured?

Such a question has been a central theme in the United States women’s national team’s ongoing equal pay lawsuit against the U.S. Soccer Federation. TV rights for the U.S. women have been bundled with other properties, including MLS, under Soccer United Marketing’s arm.

Measures are slowly being taken to unbundle media rights and sponsorship in Europe, for example, to help better define the value of the women’s game. In 2019, Visa and UEFA began a seven-year sponsorship of the Women’s Champions League and other UEFA competitions.

Despite the overall lack of specific data, there are intriguing specifics in FIFPRO’s report regarding sponsorship. One title sponsorship deal — left anonymous but consistent with reports around what Barclays is paying as title sponsor of England’s Women’s Super League — is worth nearly EUR 4 million per season. There are success stories at the team level, too, including an NWSL club making over $500,000 per year from a title jersey sponsor. (Utah Royals FC announced a ‘record-breaking’ deal upon entering the league in late 2017.)

From the need for innovative competitions and establish longer seasons, to stronger investment from media, FIFPRO’s report argues that the entry-level cost of supporting women’s soccer remains low, while the return on investment could be significant. The argument is supported by global trends beyond sport, which include the contributions of women to the global economy growing close to $18 trillion.

“The central axiom in sport is that talent follows money, eyeballs follow talent and money follows eyeballs. The key to improving standards in any sport is to give talent both the time, the opportunity and the guidance to be the best they can. As standards improve the audience and interest grows. This then creates the conditions for media interest. Where media audiences grow, sponsorship blooms soon after. There is every reason to believe that women’s football is close to this tipping point.”