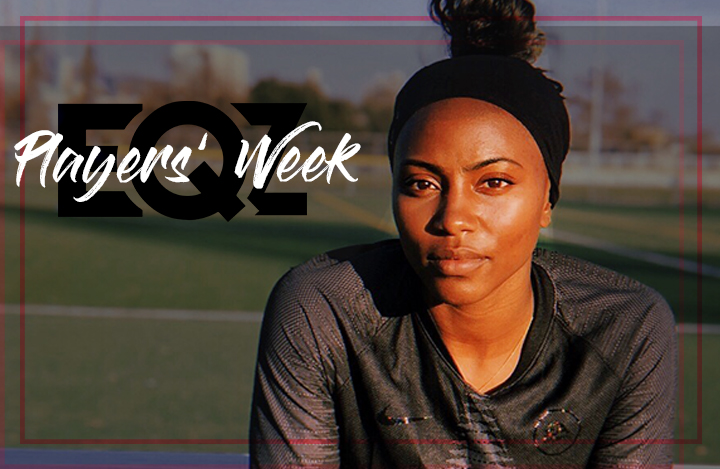 Editor’s Note: This essay is part of our Players’ Week series, in which pro players write their stories directly to you in the first person. Each player’s story is unfiltered and written by them. Subscribers to The Equalizer Extra get first access to these before the general public. Give the digital gift of a one-year subscription by clicking here.

During my journey as a professional athlete thus far, I have come face to face with obstacles and been under pressure. I have had to be patient all while still having to perform at a high level. This has taken an unwavering faith in God, extreme belief in myself and my abilities, and canceling outside noise.

This has taken focus that I never had to elicit at the high school and college levels. What I believe about myself had to significantly outweigh others’ opinions in order to keep going. It would require a change of perspective. I had to tap into a mental state that wouldn’t alter every time my circumstance changed.

With that being said, this is my journey. Even though it’s far from over, this is what has gotten me to the point I am at today.

In December 2014, I won the national championship with Florida State. I scored the winning goal in a 1-0 victory over Virginia with eight minutes left and I guess you can say I was on cloud nine. I had a great career at Florida State, but for some reason was not projected to go high in the draft on any of the mock drafts, if drafted at all.

This brings me to my first point: Dwelling on the hypothetical will break you down. By this I mean, constantly thinking about theoretical situations that have not happened or may never happen. I started to get a bit worked up about the thought of not being drafted, and after such a high of being a national champion, I began to contemplate if professional soccer was in my future. I didn’t even go to the draft because I was so unsure, based off of the projections I read online. Come draft day, I was picked No. 14 overall, in the second round, by the Boston Breakers. All of the worry and dwelling on negative thoughts of not being selected was pointless. God was in control.

I arrived in Boston in 2015 and had to fight for a contract. I stayed the whole preseason thinking it was going well and the last weekend before the season started, I was notified that I wouldn’t be receiving a contract. This led me to try out for the Western New York Flash. I went on a week-long trial and ended up getting a contract. I dealt with injury throughout the season and had to get bilateral sports hernia surgery after the season.

Coming back from surgery was a challenge in itself because I was wondering if I was going to be the same player I was before. Also, there were talks that there was going to be an expansion draft for a new team in Orlando. I knew there was a possibility for a new opportunity, but I was injured, and I wasn’t sure how that would play out.

Reflecting on my 5th season, and I’m truly thankful for being healthy and being able to play but mostly importantly thankful for the great people God brings into my life season after season & that my family in Houston made it to every home game to support me no matter what! Feeling Blessed 🧡

I was selected in the expansion draft and would play for the Orlando Pride (2016-17 season) before getting released from the team two weeks before preseason, leading into the 2018 season. Again, I felt like I was in a similar situation as Boston, where everything was uncertain and what happened was completely out of my control. I felt blindsided and contemplated if my goals and ambitions were achievable. This feeling was familiar, and God has brought me through that situation prior, so I knew He could do it again.

I waited a couple weeks to see if a team was going to pick me up or if I would have to go overseas. I knew that I wanted to play overseas at some point, but I did not know if I wanted to go just yet. I felt healthy and ready to play, so if God led me overseas, I knew that I would just have to take a leap of faith. Within two weeks, I got the call to go play in Norway. Different language, different culture, many, many miles away, but I knew this is what I had to do if I wanted to reach the level that I have been striving for all these years.

Being in Europe gave me the opportunity to see many amazing places such as France, Germany, Croatia and Iceland. I played in the Champions League and met so many amazing people. This detour allowed me to take a step back and appreciate travel, genuine connections with people, and appreciate my family and friends back home. I also got to play a more direct and physical style of football compared to the States, which challenged me to adapt to many different situations on the pitch.

Making it back to the U.S. in November 2018, there I was again, waiting. Waiting became a trend in my journey — the new normal. I was waiting for emails, waiting for responses, waiting for a team, waiting to be able to play the game I love again. At this point, I reflected once again and for the first time ever I began, in some way, to appreciate the waiting. In these moments of silence, I began to focus on things outside of soccer. I got to appreciate time with my family and friends after being gone for eight months. It gave me the opportunity for internal peace and mental clarity.

I knew that I wanted to play in the NWSL again, so I reached out to the Houston Dash and got invited into preseason. God opened another door, another opportunity and I was thankful. However, I would be going into preseason as a trialist despite playing in the league for three years and being a four-year professional. This was a very humbling situation and allowed me to come into preseason with a chip on my shoulder. 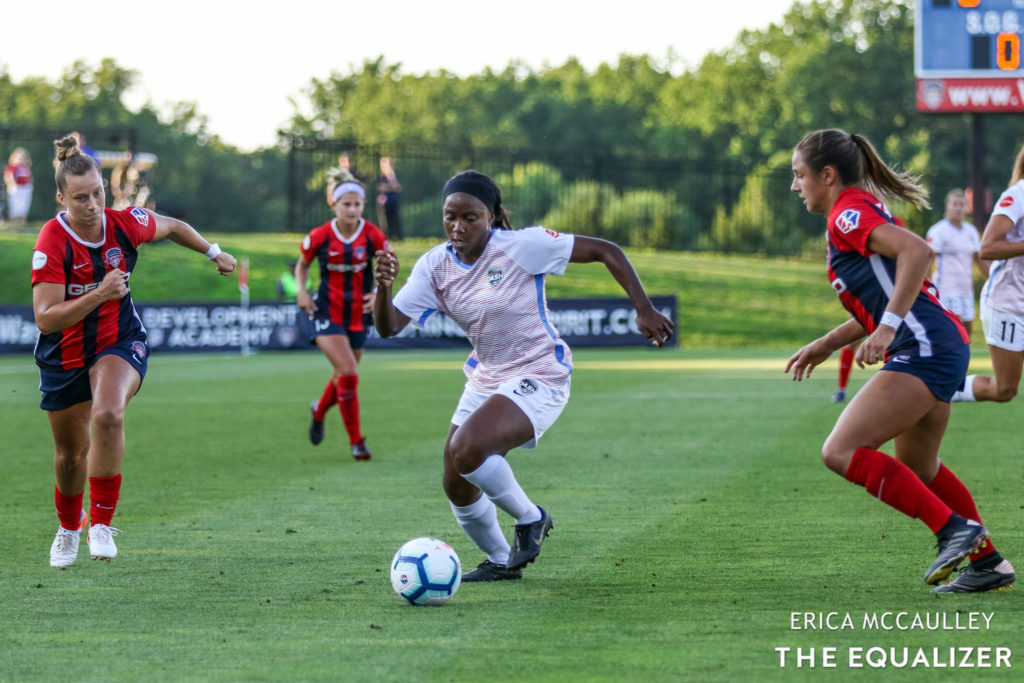 In action for the Houston Dash (Photo by Erica McCaulley)

Even though I felt confident and knew I could play in this league, I constantly had to fight thoughts that came with coming in without a contract. Are there enough spots? Will I fit in with the team? Do the coaches already have their mind made up? For a second, these thoughts filled my mind then I remembered who was in control. God was in control. I had to perform well with all these thoughts but in the end, the comforting thought that “what was meant for me is mine and no one can take it from me” prevailed.

I went on to play the 2019 season with the Houston Dash.

The 2019/ 2020 offseason was where most of my growth and reflecting took place. I began to really understand how important mental toughness is to the success of your game. We are all talented; we have all been kicking this ball since we can remember, but we don’t all have the mental stamina to perform when the odds are seemingly against us.

I began conditioning my mind to live and appreciate the present but prepare for the future, and what I want to accomplish. I realized that altering your perspective in any seemingly negative situation could immediately allow the situation to be in your favor. I read books and listened to podcasts and tried to get the most insight I could from people who have dealt with similar situations. I got into the best shape of my life physically but most importantly mentally. I truly became my biggest cheerleader and rebuked negative thoughts that would try to creep in.

I believe God is structuring my path and every detail is developing my character and I am excited to see where my career continues to take me. I will leave you with a couple of my favorite sayings that allow me to conquer my circumstances: