Fighting back against breast cancer 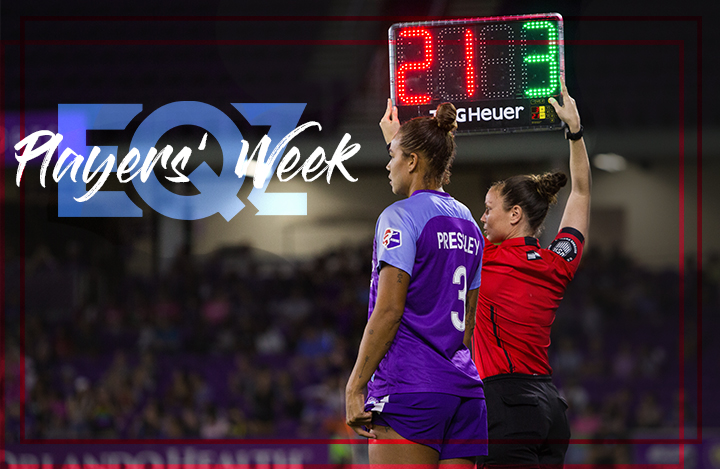 Editor’s Note: This essay is part of our Players’ Week series, in which pro players write their stories directly to you in the first person. Each player’s story is unfiltered and written by them. Subscribers to The Equalizer Extra get first access to these before the general public. Give the digital gift of a one-year subscription by clicking here.

I always knew this could be a possibility because, in the weeks prior, I had been to doctors and physicians trying to get answers to a subconscious inkling. Several appointments, ultrasounds, a biopsy, an MRI, and what felt like the most painful mammogram in history.

I found out that I had breast cancer on July 5, 2019. The very next night I had a game to play. So, you can imagine that my mental state was a bit shaken. I still don’t know how I was able to put this newly-received information on the back-burner and play a soccer match. Maybe it was the shock of it all?

I remember tearing up for a moment after hearing the words no one expects to hear. I remember being short with my physician. I remember sitting in silence after, tying to quickly navigate what I should do next, who I should tell next.

I knew that I would only tell the people who needed to know right away. My girlfriend, my team’s athletic trainer, team doctors, and Rikki Keen, our nutritionist here at the club who was going through a similar situation. Honestly, if not for her, I probably never would have scheduled that initial doctors appointment.

The next day, game day, I tried my best to stick to my normal routines. Same rituals.

Most of that day now seems like a complete blur but I was in the starting 11 and we beat our opponent 4-3 at home.

After the game, I sat on the field just staring at the grass, trying my hardest not to cry. I couldn’t help it. I didn’t know when, or if, I’d be able to play soccer again. I didn’t know what my future was with this disease.

It wouldn’t be until August 2 that I’d have surgery to remove the cancer.

So, almost a month goes by where I’m keeping this secret from my teammates and coaches.

I told my family a few days after I found out the initial news. They handled it pretty well. I did my best to come to them with all the information I could and assured them that it would be okay, when really not knowing if it would.

Up until the day of surgery, I was training, in the gym and playing matches. I soon realized that I needed to tell my coaches what was going on. My surgery date was quickly approaching and I kept this information to myself for as long as I could. 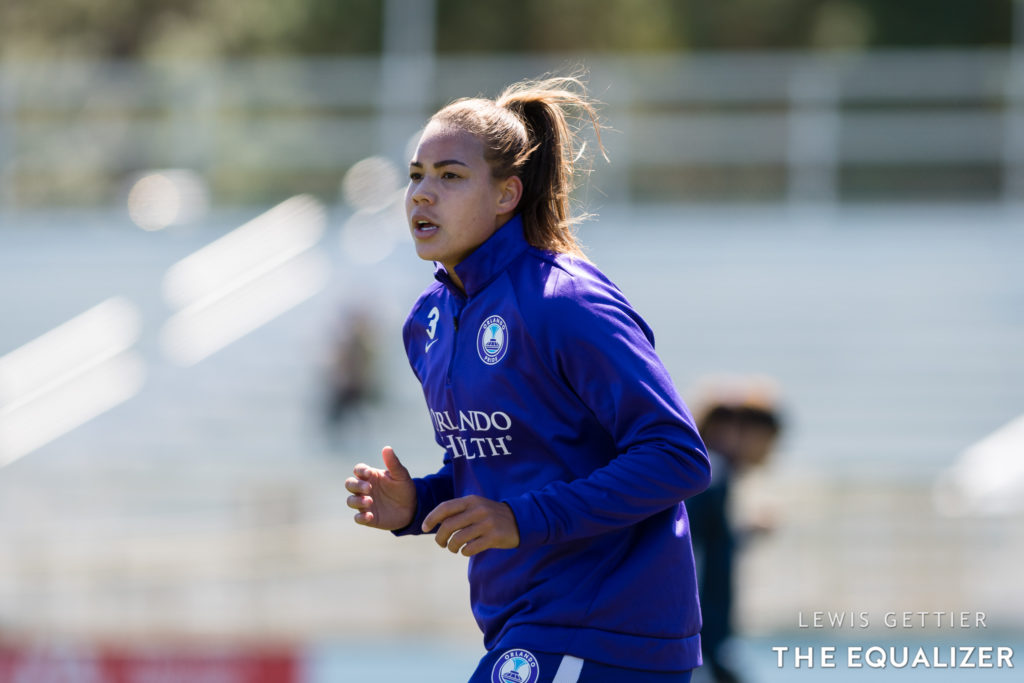 There were a few weeks before the next game and it was the opportune moment. I asked if I could meet with my head and assistant coach, I’m sure they thought I wanted to meet for video analysis, which normally would be true.

They had no idea what was coming.

I sat in their office and the words wouldn’t come forward. Only tears. That was the hardest part of this entire situation: telling them. It was now real. They knew and I knew that playing would be put on hold for the foreseeable future.

I finally managed to tell them everything that was going on. They were amazing in the way that they handled my news. Supportive. Calm.

One of the best things they did for me was that they never treated me differently. Always expecting my best, even in this situation. That form of support and care is something I so desperately needed. In a time where a piece of my identity was being taken from me, they helped me fight back.

After telling them, I knew now the only thing left to do was to tell my teammates. I always knew this part would be tough. I originally wanted to tell them in a text message. It would be easier. I wouldn’t have to deal with my emotions. But it’s not what they deserved; they’re my family.

A post-training meeting was quickly added to our schedule.

Up until now, I thought telling my coaches was the hardest part. Boy, was I wrong.

I sat there before them, unable to speak. Unable to form words. The only thing I managed to do was cry, again. I was so anxious. I was nervous. I was scared. I finally get the words out.

I told them what had been going on — that I have breast cancer. I tell them not to worry. That I will be okay. That I will be back soon. To stay focused on the job here of training, playing and performing.

I think that is one of the reasons I waited so long to tell them and my coaches. I didn’t want what I was going through to distract anyone from their job. From performing every single day.

The room at this point is pretty emotional. I am a mess. Everyone gives me a hug and I am so grateful for their love and support.

I think we then go to the gym to lift. I get some lingering questions, which I am happy to answer. I believe that was my last day with the team before my surgery. It was a very emotional day, but very much needed. I felt like a weight was lifted off my shoulders in telling them and now I could go off and do what needed to be done to save my health. 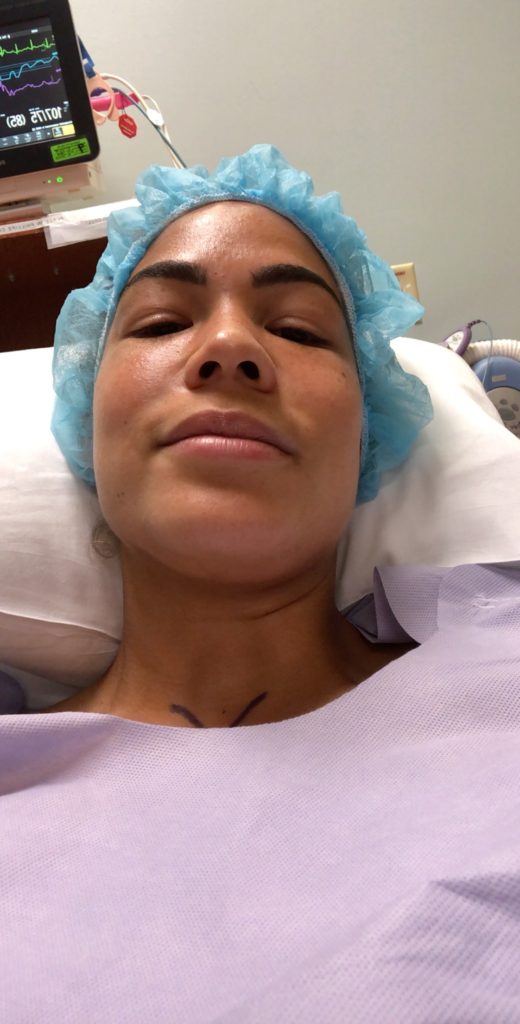 My grandparents arrive in the morning to drive me, stay during surgery and take me back home.

I was never afraid or scared. I guess I felt that somehow I would be okay. Maybe that was just self-preservation kicking in.

In prior appointments, my doctors informed me that I had what was called Ductal Carcinoma in situ (DCIS). This is a type of breast cancer that is considered to be noninvasive. It is the presence of abnormal cells within the milk duct and considered Stage 0, the earliest stage of breast cancer.

I was very positive going into surgery.

All of the doctors at Orlando Health were amazing in their care for me, providing me with information and options.

I would end up having a double mastectomy, even though the cancer was only on one side. I thought: Why risk it? Take them both.

My procedure would include my breast surgeon, to remove my cancer and breast tissue, and my reconstructive plastic surgeon, who would later give me implants. But for now, expanders were put in that would be filled with solution every week or so to stretch my skin and prep me for the implants. 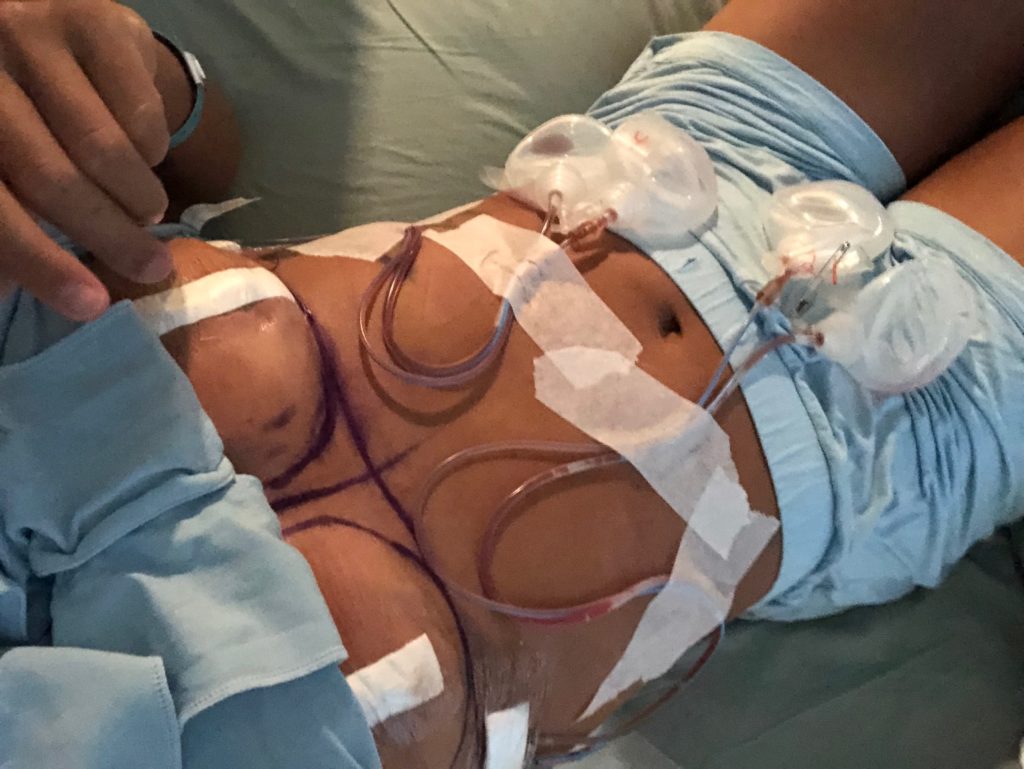 About five or six hours later, I woke up from my procedure.

I remember being fed crackers by my grandmother. I was pretty out of it, not really able to chew or stand. I recall getting into the car and getting out at my apartment, getting into bed — then lights out.

The next day, I woke up to these skinny tubes, my surgical drains, on both sides of my upper ribs. Two on each side. These would drain any fluid from my chest into plastic grenade-like objects that needed to be emptied twice a day for about a week and a half.

Honestly, I think this was the worst part of it all. Having a total of four tubes prohibiting me from doing daily activities.

I was terrible at staying in bed and resting. I was so accustomed to doing things for myself and being active, but then I was being told to not carry things, not reach for things — all the routine movements I normally make.

It was extremely hard because in my head I felt completely fine. Even though I went under this traumatic procedure, there was little to zero pain. I felt as though I could go out and train again.

Shortly after my surgery, it was time for the world of soccer to find out what I had been going through.

Loads of messages and kind words came flooding in. From friends, fans, and people I didn’t even know. I am so lucky and thankful to have the thoughts and well wishes from so many.

I am also especially grateful to have the support of the NWSL, its clubs and players.

Life for me was very boring, especially compared to what I was used to. I did a lot of laying in bed, getting out for a walk when I could, lots of dog cuddles, reaching for things I shouldn’t have, and doctors appointments. It was very routine. 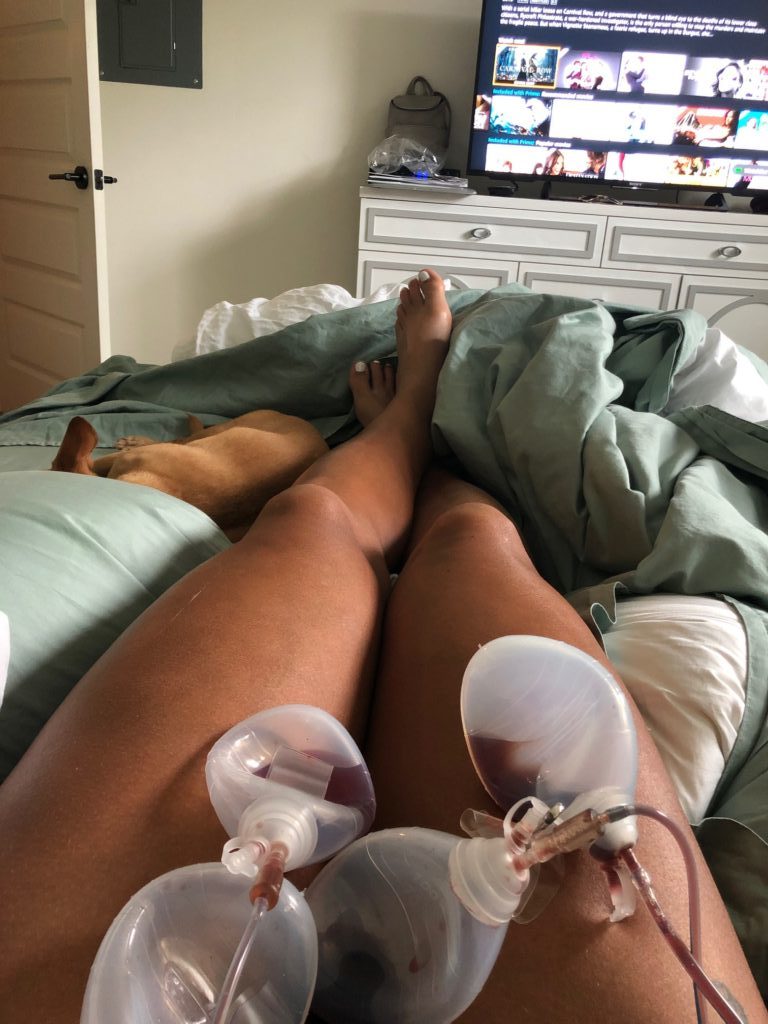 I would go to my reconstructive surgeon’s office every week for check-ups and my expander fills. In one of those meetings, they took my bandages off for the first time. Coming to terms with what I now looked like was very hard for me. I remember driving home in tears because I felt like something was taken away from me. I wasn’t myself anymore. Depression is truly what that day felt like. But I soon got over it, realizing that my physical appearance doesn’t define me.

I also saw my oncologist, who would explain to me my future treatments. She told me that based on a test that was done, I did not need radiation or chemotherapy. I didn’t find this information out until after surgery and now another weight had been lifted off my shoulders. I feel very lucky that I didn’t have to undergo any further treatment. Although, during my operation, my doctors did end up finding a small amount of invasive cancer, leaving me to be categorized as Stage 1.

My oncologist also recommended seeing a fertility specialist, before I knew that I would not need chemo. It was a lot to process for my 29-year-old self, thinking I need to possibly save my eggs because the chemo could leave me infertile.

When my appointments became less frequent, life for me was now about recovering and getting back to the field as quickly as my body would allow me.

Two weeks post-surgery and I was already back around team trainings, watching from the sidelines, still trying to absorb any information I could through video and watching everyone out on the pitch.

Before I knew it, I was back in my runners and able to do some light jogging, four weeks post-op. Another month or so probably went by and I was in full team training. One more month and I would be subbed in to our last game of the season — our Breast Cancer Awareness Game.

This whole experience seemed so surreal. How was I just in surgery for a double mastectomy and now back on the field playing two months later? Then, another month later, playing in my team’s last match of the season?

All I knew was that I was so appreciative and so extremely happy to have soccer back. That I had an entire support system around me to help guide me, keep me healthy, and get me back onto the field. That I had my family behind me every step of the way.

This entire experience has really taught me a lot about myself. It has made me more conscious of my health. It’s taught me to listen and trust my body and its signs.

It has made me more appreciative of the little things in life, and it made me embrace each day and challenge because I realize I am very lucky when so many are not. 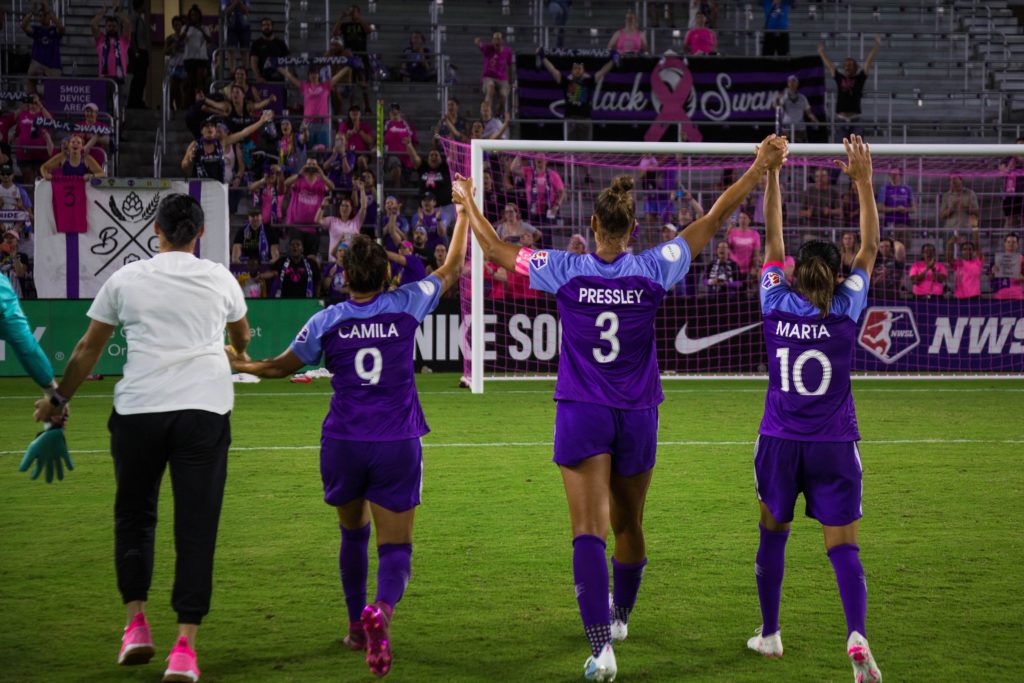