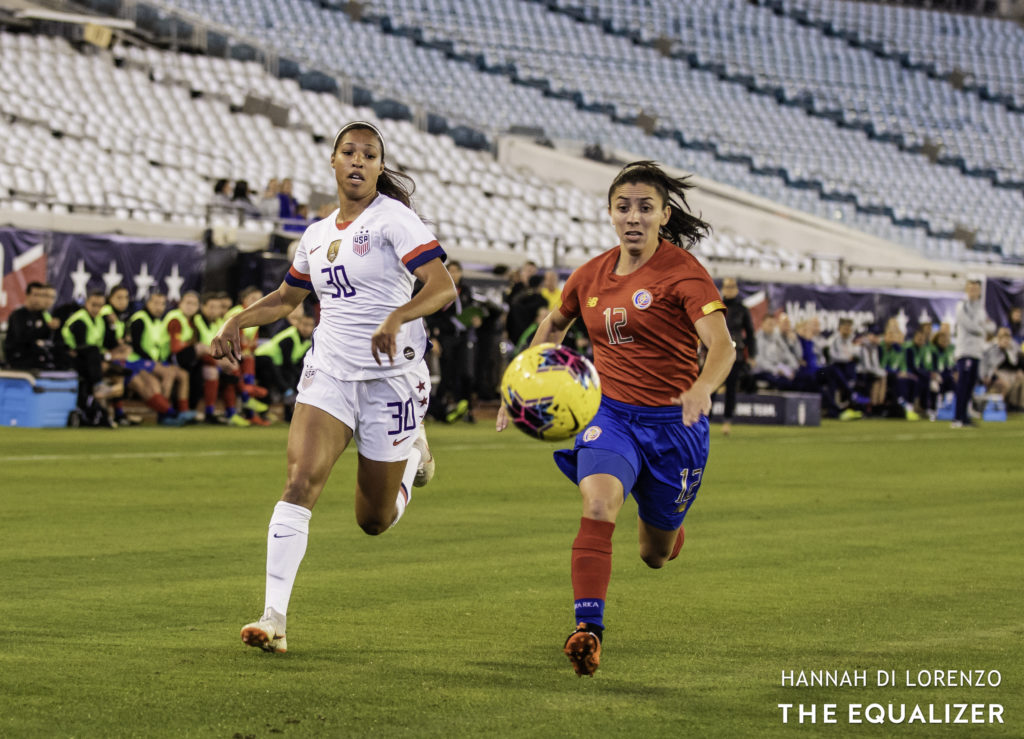 Shirley Cruz signed with OL Reign for the upcoming 2020 National Women’s Soccer League season, becoming just the second Costa Rican women’s national team player to join the league. The first was Raquel Rodriguez, who was drafted by Sky Blue FC in the 2016 NWSL College Draft. Rodriguez remains in the NWSL, but now features for the Portland Thorns FC.

When thinking of the top teams and players in Concacaf, the United States and Canada are certainly the first to come to mind. The two nations are represented in plentiful amounts in the NWSL. Costa Rica, on the other hand, doesn’t have much influence in the NWSL. Will Cruz help further blaze that trail, as she did 15 years ago with her move to Lyon?

Most players on the Costa Rican national team feature domestically. However, a few players have made their way abroad. Cruz was the first notable Costa Rican player to do so, featuring in France for over a decade with Paris Saint-Germain and Olympique Lyonnais. Melissa Herrera followed some time later, signing for Stade de Reims in France in 2018.

Will more Costa Rican players follow Cruz and Rodriguez to the NWSL? Here are a few players who could have a chance in the top-tier league in United States.

She’s been part of the national team program since 2011, anchoring the left side of the defense. Right now, she features for Alajuelense (where Cruz was playing), with a handful of other teammates, after helping CD Tacon (the club transitioning into Real Madrid’s branding) earn promotion to Spain’s top flight last year. One look at Rodríguez, and you’d hardly think that she’s a defender. She exhibits a Crystal Dunn-like stature of 5-foot-0. However, the 29-year-old has been a regular for the national team. She’s up to over 70 appearances, which puts her in range with Katherine Alvarado.

A veteran defender is what a team like the Washington Spirit could use. Washington is a young team with a lot of promise. Last year, the Spirit barely missed the playoffs. In this year’s draft, the Spirit picked up two rookie defenders in Kaiya McCullough and Brooke Hendrix. There’s a lot of youth on the Spirit defense. In a perfect world, head coach Richie Burke would find Rodríguez, bring her to Washington and give her the reins to mentor the youngsters.

Whenever a player has over 50 national team appearances, you would think that they might be in their mid-to-late 20s. That’s not the case for Costa Rican midfielder Gloriana Villalobos. At only 20 years old, Villalobos has 53 appearances for Costa Rica. Right now, she’s featuring for Herediano in her native country.

However, Villalobos went to college in the United States instead of jumping right into league play. Florida State was her home for about two years, but in 2019, Seminoles head coach Mark Krikorian mentioned that Villalobos left the team and program for personal reasons. She never returned to finish her career at Florida State, electing to go professional in Costa Rica. When she returned to Costa Rica, she featured for Saprissa.

Internationally, Villalobos hit the scene at a young age. She was the youngest player on the Costa Rican squad at the 2015 Women’s World Cup. Villalobos was also on the team this past summer when Costa Rica took bronze in the Pan-Am Games.

A midfielder that’s only 20, but with a world of experience under her belt, is rare to find. Villalobos is usually a regular starter for Costa Rica, and is following the footsteps of Cruz in becoming the country’s next big star. Villalobos would fit in with the present-day Utah Royals. Utah is set with strikers — having weapons like Christen Press, Amy Rodriguez and now draft pick Tziarra King — but the midfield could use some help. Villalobos could be a longer-term investment as Utah rebuilds.

Stop if you’ve heard this before: there are so many talented goalkeepers but not enough space. That’s the case for players like Katelyn Rowland — who went from starter to now backup for Stephanie Labbé — and Lydia Williams, the Australian international who rotated and then backed up Michelle Betos for the Reign.

Goalkeeper spots are the toughest to fight for in the NWSL. While there’s more room for field players, goalkeepers usually take up two or three spots on an NWSL roster. However, if teams are looking for a solid backup on the international stage, Priscilla Tapia would be a great get.

Tapia wasn’t with the team in Canada at the 2015 World Cup. However, the 28-year-old was part of the bronze-medal Pan-Am team. Currently, Tapia has six international appearances for Costa Rica and features for for AD Moravia in Costa Rica. Tapia was the player in goal for Costa Rica during the Concacaf Olympic qualifier match against the United States. Six goals is always tough for a goalkeeper to concede, but Tapia’s seven saves were the real eye-turning plays for Costa Rica.

Tapia could serve as a solid backup for the Houston Dash behind Jane Campbell or Sky Blue FC, learning the ropes from fellow Concacaf goalkeeper Kailen Sheridan.