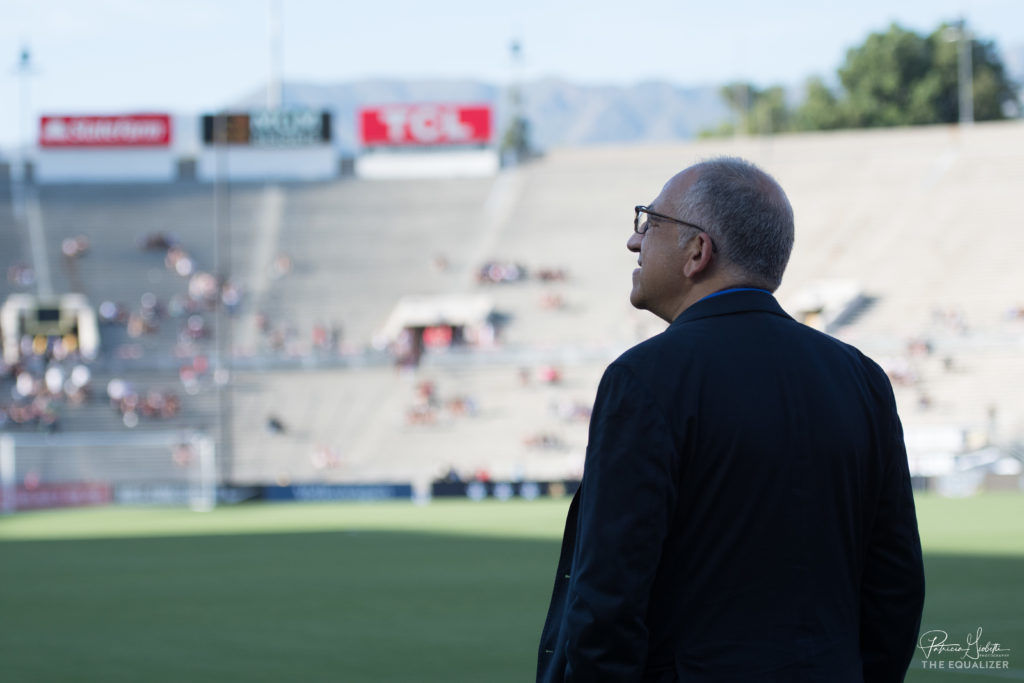 Cindy Parlow Cone, former U.S. national team player and recently re-elected vice president, will now serve as president of U.S. Soccer until the next U.S. Soccer annual general meeting in February 2021. There will then be an election for a one-year term to finish Cordeiro’s original term.

Cordeiro said in his public resignation letter that he decided to step down after discussions with U.S. Soccer’s board of directors. Among them is Major League Soccer commissioner Don Garber, who earlier Thursday released a statement that he was “shocked and angry” at the “unacceptable and offensive” statements made within U.S. Soccer’s legal filings. Parlow Cone also tweeted her discontent, saying she disavow[ed]” the statements. Major U.S. Soccer sponsors Coca-Cola, Visa, Budweiser, Deloitte and Volkswagen also released statements of disappointment in the 36 hours prior to Cordeiro’s resignation.

The reaction came after hundreds of pages of court filings released late Monday night revealed U.S. Soccer’s legal arguments for not paying the women’s national team equal to the men. The arguments cited “indisputable ‘science'” that male athletes are faster and stronger than female athletes.

In response, U.S. women’s players warmed up for their match against Japan on Wednesday with their training gear turned inside out, hiding the U.S. Soccer crest while still showing the four stars representing their four World Cup titles.

Cordeiro issued a short apology while that U.S.-Japan game was wrapping up on Wednesday night. On Thursday, he reiterated his regret.

“The arguments and language contained in this week’s legal filings caused great offense and pain, especially to our extraordinary Women’s National Team players who deserve better,” Cordeiro wrote. “It was unacceptable and inexcusable.”

Thursday’s apology came after Garber and Parlow Cone joined a chorus of prominent voices expressing disappointment with the federation. U.S. women’s national team greats Michelle Akers, Abby Wambach and Heather O’Reilly all tweeted that they felt Cordeiro should step down. At 9:06 p.m. ET, he tweeted that he would be doing exactly that.

It has been an incredible privilege to serve as the President of U.S. Soccer.

My one and only mission has always been to do what is best for our Federation.

After discussions with the Board of Directors, I have decided to step down, effective immediately. My full statement: pic.twitter.com/4B7siuIqcL

The Associated Press reports that Cordeiro tweeted his statement before even telling U.S. Soccer’s communications staff that he was resigning.

Cordeiro was elected to a four-year term as U.S. Soccer president on February 10, 2018, after previously serving as vice president under Sunil Gulati. Cordeiro joined U.S. Soccer in 2007 as an independent contractor.

Parlow Cone first took over as vice president in 2018, when the role became vacant due to Cordeiro winning presidency in a contentious election. The VP role she previously held is neither a full-time nor a paid position. U.S. Soccer is still without a CEO and has been since Dan Flynn left the role in September.

“I want to thank Carlos for his many years of hard work and dedication on behalf of U.S. Soccer,” Parlow Cone said in a statement. “He is a good man with a good heart and his significant work to help bring the 2026 World Cup to the United States will have a positive impact for generations. The passion that has come to the surface in the past two days is what inspires me to look forward, to work hard towards mending relationships and moving the game forward for all.”

“While it is gratifying that there has been such a deafening outcry against USSF’s blatant misogyny, the sexist culture and policies overseen by Carlos Cordeiro have been approved for years by the board of directors of USSF. This institution must change and support and pay women players equally.”

A trial between U.S. women’s players and the federation is scheduled for May 5. U.S. women’s players claim that they have not been paid equally to the men and they estimate more than $66 million in damages. Monday’s legal filings were submitted to federal court in Los Angeles as part of U.S. Soccer’s defense.