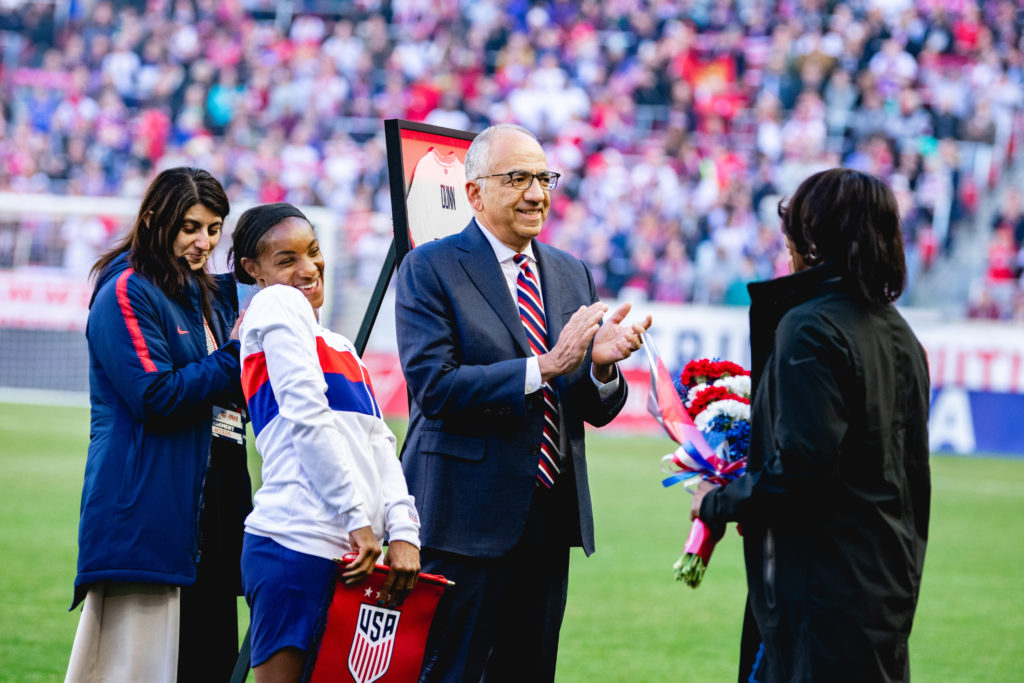 Carlos Cordeiro’s resignation as U.S. Soccer president on Thursday put an exclamation mark on a tumultuous week for U.S. Soccer in what might have been the most surreal, collective 48 hours in sports as the COVID-19 pandemic forces global event cancellations.

Cordeiro’s resignation came days after U.S. Soccer, in its legal defense against its own women’s national team players, argued in court filings that it was “indisputable science” that elite men’s athletes were faster, stronger and more skillful than women’s athletes. Those views, which were laid bare in hundreds of pages of legal documents, on Wednesday sparked a subtle but powerful protest from U.S. women’s players, who wore their training gear inside out to hide the federation’s logo.

Cordeiro did exactly that, ending a rocky and a largely misguided two years in charge as the federation navigates multiple lawsuits, including the high-profile one against the U.S. women which sparked this week’s events.

Still, Cordeiro’s departure will not mark a wholesale change to the culture of the federation. He was not the only one (despite proclaiming ignorance) aware of the federation’s grotesque legal arguments which degraded its own women’s national team players — its own World Cup champions — to inferior athletes. It’s hard to believe the board of directors (which includes Garber) didn’t already know about them, given that the case is now over a year old and such line of questioning has been ongoing for months.

No, that’s highly unlikely. In which case, Cordeiro is just the scapegoat painted into the corner as the tide pulled him and the federation further out to sea, pushed on by the threat of losing major sponsorship money as Coca-Cola, Visa, Budweiser, Deloitte and Volkswagen spoke out.

Parlow Cone moving into the president role will ostensibly help with everything. She’s a World Cup and Olympic champion from her days as a U.S. player and can’t be any less of an ally to the women’s players than Cordeiro, who was elected based on a campaign platform which included the idea of “working toward equal pay.” (And, again, it’s hard to believe Parlow Cone was entirely unaware of U.S. Soccer’s legal approach.)

Does Parlow Cone actually want to be president? That’s a serious question worth asking. The VP role she signed up for is part-time and voluntary. Now, she’s tasked with guiding a rudderless ship as president, working a seven-figure job for no pay (on top of her other work coaching in North Carolina).

Dan Flynn left as longtime U.S. Soccer CEO in September and has not yet been replaced. It’s an open secret that U.S. Soccer has been unable to fill the job. According to multiple sources, so many candidates have concerns about walking into an impossible situation which includes this high-profile lawsuit and an organizational culture which has been described as toxic.

Jay Berhalter, who shouldered some blame for the creation of that environment, is gone. He was in line to become CEO before the U.S. Soccer employees publicly expressed discontent over the organization’s culture and how they were treated (feelings which have since been confirmed internally). Berhalter resigned from his role as chief commercial officer last month.

That left Cordeiro as the face of U.S. Soccer’s front office (but certainly not of U.S. Soccer). Throughout his tenure, the federation lacked leadership, something constantly pronounced by issues such as long delays in hiring the U.S. men’s national team coach, as well as general managers for the men and women. His parting act was helping widen a gap in the relationship to between the women’s team and the federation, one which could take a full generation of players to truly mend.

Filling that empty CEO seat with a capable person immediately should be a high priority to give some support to Parlow Cone, who will serve as president through the next annual general meeting, likely in February 2021.

U.S. Soccer has operated seemingly without direction for the past few years. The federation can’t sink much lower than where it stands now.