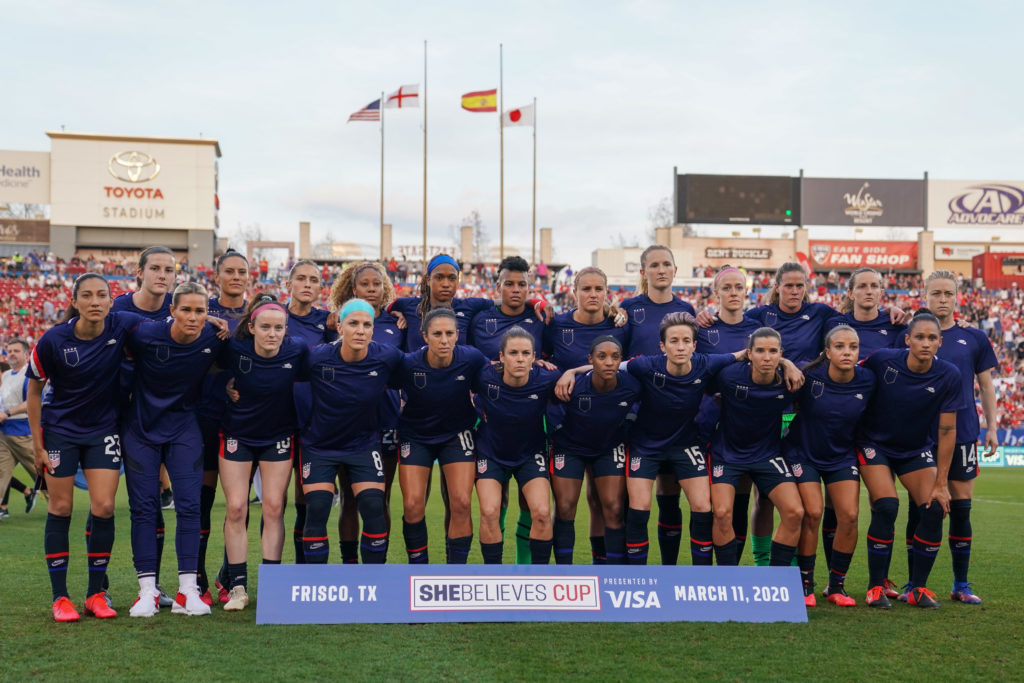 This is much bigger than soccer

This is much bigger than soccer

The United States women’s national team won a soccer game on a day when sports results didn’t matter at all.

With the backdrop of the coronavirus pandemic already putting sports into perspective — the NBA decided during that U.S. game to suspend all play, and NCAA basketball tournaments will be played without fans — the U.S. women warmed up for the match with their shirts turned inside out to hide U.S. Soccer’s logo. The four stars representing the four World Cups they won, however, were still visible from the stitching on the reverse side.

Players were responding to the past few days of events. First, there was U.S. Soccer president Carlos Cordeiro’s letter on the eve of International Women’s Day which said the federation offered “identical compensation” to the men’s and women’s teams. Player representatives quickly shot that down as a lie, and the stage was set for a tense Sunday (when the U.S. defeated Spain) which gave way to the truly ugly stuff which has been boiling in private until now.

Court documents which were released late Monday night made it clear that the U.S. Soccer Federation does not value its women’s players. Snippets of depositions from the past several months were revealed in those documents, and in them, U.S. Soccer’s counsel repeatedly makes the point that women’s players don’t do equal work (and thus, by their argument, don’t deserve equal pay) because men are stronger and faster and thus more skilled. The documents laid bare sexism within U.S. Soccer that players long hoped was, at least, only subconscious or unintentional. That benefit of doubt is gone.

It took seven minutes for Megan Rapinoe, named by FIFA as the world’s best player in 2019 and a chief protagonist in adding that fourth star to the shirt last summer, to display her superior skill with a sublime free-kick goal. Nineteen minutes later, Christen Press scored on an audacious chip that’s as skillful and spectacular as you’ll see from any player, any gender.

Cordeiro and U.S. Soccer officials issued a statement that was read live in the final minutes of the ESPNews broadcast of the U.S.-Japan game. In it, Cordeiro apologized for “the offense and pain caused by language in this week’s court filing,” but the statement rang hollow — more of the ‘sorry to have offended you’ variety.

What a day it has been in sports.

The more detestable stance taken by U.S. counsel in the court filings were the result of months of work in this ongoing legal battle. Those positions were carefully crafted over time in order to try to win this case — one which appears to be costing far more than U.S. Soccer calculated.

On Wednesday, major U.S. Soccer sponsors Coca-Cola, Deloitte, Visa and Budweiser issued statements condemning U.S. Soccer’s position in the legal documents filed two days prior. Within hours, Cordeiro was walking back those harsh statements and making a promise that the federation respects its women’s players. That promise, after the past few days, cannot possibly be taken seriously even by the most objective observer.

Also new: VISA, another major sponsor of US Soccer, is condemning US Soccer's comments about women athletes and says they will ask to meet with the federation. Full statement: pic.twitter.com/mly2uHzkTR

Optics have long been with the players in this saga, even if the legal case still needs ruling (the trial is set to begin on May 5). It’s appalling but not at all surprising that it took major sponsors expressing basic and obvious concern over U.S. Soccer’s stance for the federation to suddenly and ostensibly reverse course, or at least apologize. Death, taxes, and money always talking.

Wednesday was a surreal day and surely one of many more to come in the immediate future. It looks like, given public health concerns, we might be staring at an extended period of time without sports as we know them. On Wednesday, we were reminded again — in several ways — how much more there is at stake.