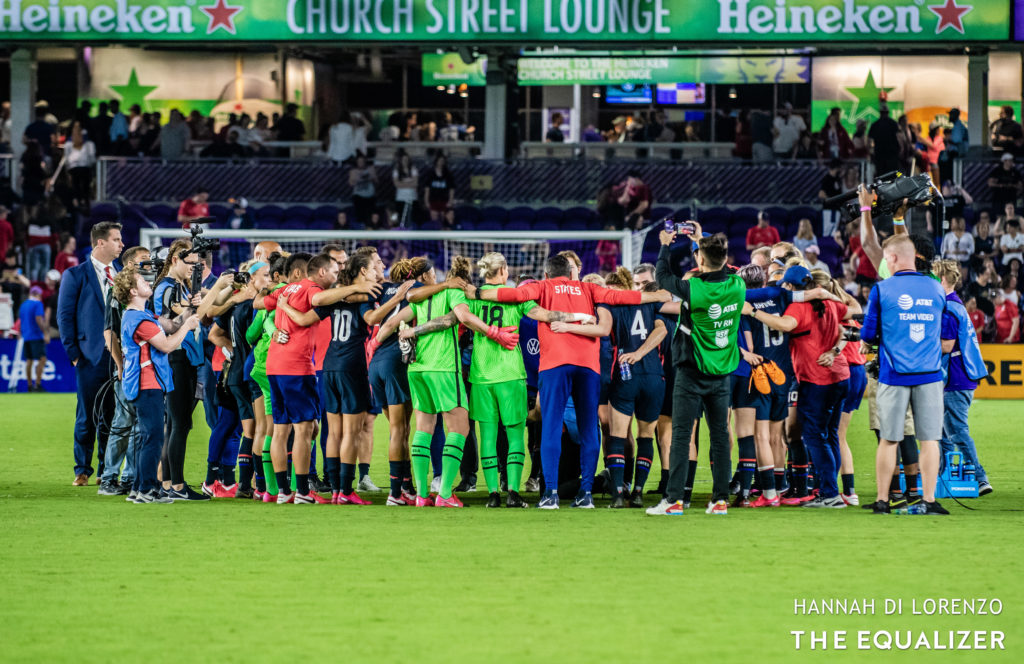 Life as a professional athlete requires frequent travel, which can also mean an increased risk of picking up nasty germs. The recent outbreak of the coronavirus, or COVID-19, has put a spotlight on that unavoidable reality.

The frequent-flyer lifestyle that the United States women’s national team lives has players and staff travelling throughout the U.S. for matches, events, and everything else in between.

In an atmosphere where you are signing autographs, shaking hands, and taking selfies, U.S. players are constantly dealing with the public and eager fan base. Taking precautions when interacting with supporters is of utmost importance to players like Ashlyn Harris.

“We’ve got this thing down,” Harris explained to The Equalizer last week. “We’re going to give big elbow dabs. We’d be naive to not think about this. We’ve talked about this is as a staff and as a team. We have to do the right thing culturally to not spread anything if we can.

“We’re doing our due diligence at meals with hand sanitizer and constantly making sure we’re all washing our hands and just making sure our hygiene is top notch. We don’t want to spread anything, contract anything. It’s going to be elbows, fist bumps, toe slaps, respecting with a bow, but no hand-shaking at this point.”

That includes fans. U.S. Soccer announced inside the host stadiums of the ongoing SheBelieves Cup that, due to the COVID-19 outbreak, player interaction with fans will be more limited than usual. Players have avoided the customary postgame photos and autographs during the most recent tournament.

“That interaction with the fans, they should understand that,” Harris said. “We’ll always respect them, but this is a real thing. We’ve got to make sure that we take care of each other and not become part of the problem.” 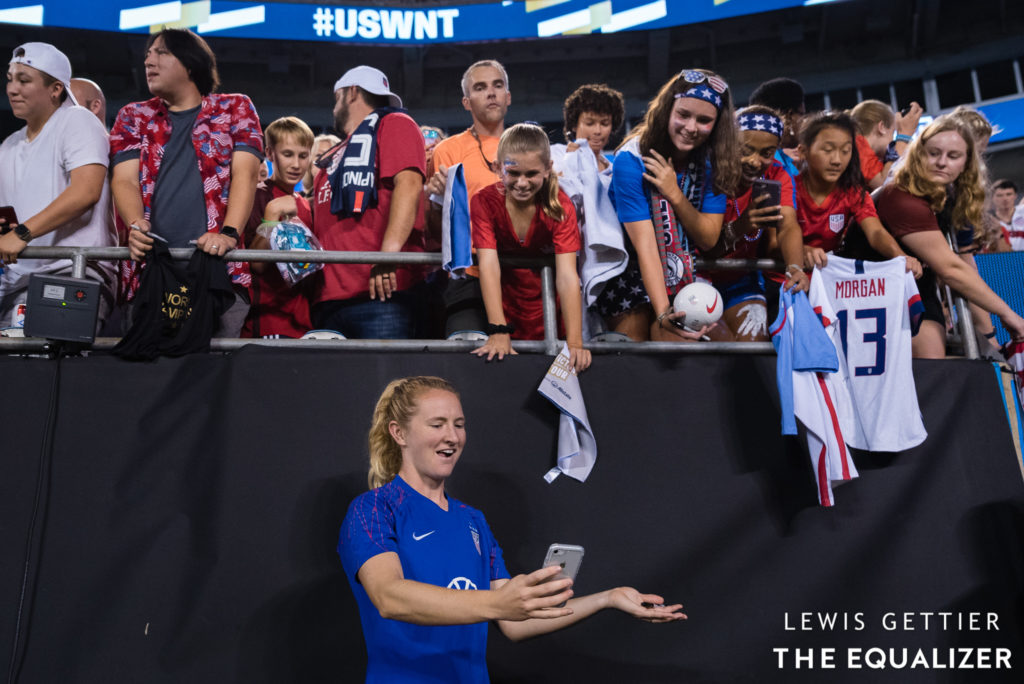 No selfies at the SheBelieves Cup (Photo by Lewis Gettier)

The 2020 SheBelieves Cup has the U.S., England, Japan, and Spain on a tight schedule. The three-city, nine-day tournament takes players to Florida, New Jersey and Texas. Hand sanitizers are at the ready as players are extra cautious flying in and around the United States.

“We travel on airplanes, which [are] some of the dirtiest places to be in,” Carli Lloyd said. “Airports, buses, everything. I’ve always tried to be very conscious of washing my hands. When you’re flying and you’re travelling, you get run down. You’re picking up sicknesses a lot easier. I’ve always kind of been a fist-bump person. I do it here with the team and everybody laughs because I don’t really want to get any germs on my hands.

“For the last five years, I’ve been fist-bumping everybody. Even when I go through the tunnels with the little kids with their arms out, I kind of do the elbows or what not. It’s all part of it. Obviously, it’s a bit of a concern. I know that U.S. Soccer and our medical staff and [Doctor] George Chiampas is going to do everything to put us in a good position and a healthy situation. Yeah, just keep washing those hands.”

As the Tokyo Olympics draw near, the possibility of the Games being canceled because of COVID-19 remains an unfortunate possibility. Already, there are soccer matches in Europe and the United States being called off or played behind closed doors. The NCAA announced on Wednesday that its men’s and women’s Division I basketball tournaments would be played in front of only team staff and limited family members. The National Women’s Soccer League issued a statement on Tuesday saying it was monitoring the situation.

#NWSL issues the following statement on COVID-19 ahead of the 2020 season: pic.twitter.com/AbIXv1uU3x

Inside the Lionesses camp, England coach Phil Neville has banned the word ‘Olympics.’Players and staff members are focusing on the now and what they can control.

“We’ve got no concerns within the camp,” Neville said of COVID-19. “We’ve taken measures before we came out here, before we traveled — hand gel, detox wipes — we’re absolutely obsessed with hygiene. I’ve got to say that we have been probably for the last six months. We are literally guided by the authorities above us and the medics. In terms of the Olympics, that is in the hands of the BOA [British Olympic Association] so it’s literally full steam ahead for us until told otherwise.”

Spanish defender Irene Parades is doing what most have already been taught to do.

“We just follow the doctor,” Parades explained to The Equalizer. “I’m not a doctor; I just follow him. I think it’s just to wash properly our hands maybe a little more than normally and just pay attention.”

U.S. Soccer could still win equal pay lawsuit in court, but public opinion has long been lost
LFG: Mallory Pugh is thankful for her wake-up call