Neville: Judge England by our play against the best 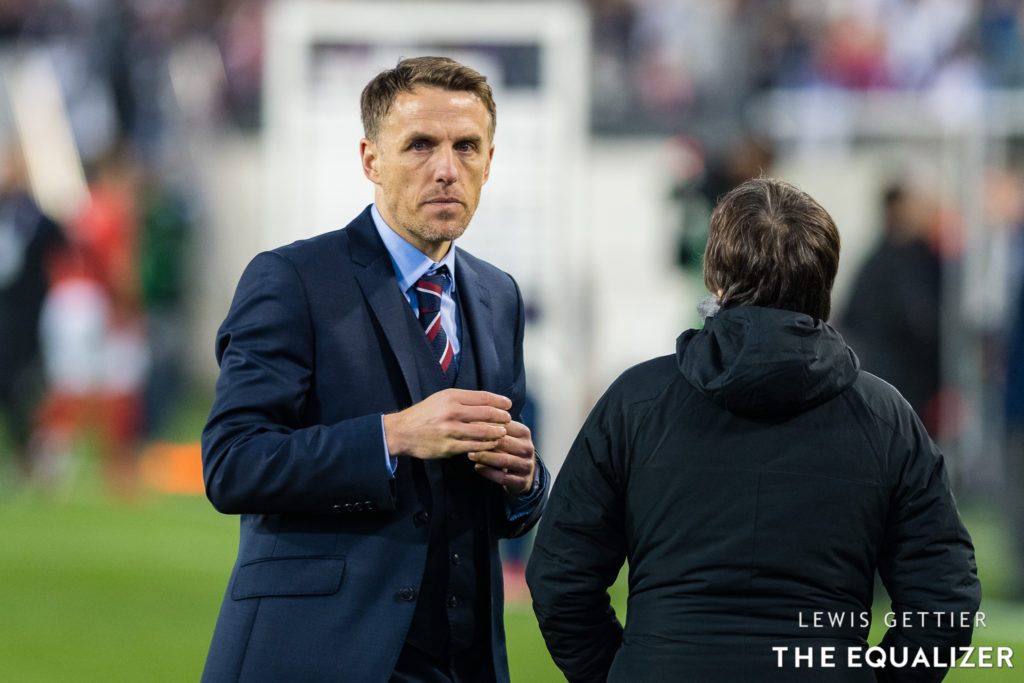 ORLANDO, Florida — On Thursday, the Lionesses will renew acquaintances with the United States women’s national team for the first time since the Americans eliminated England in a 2-1 semifinal loss at the 2019 World Cup in France. A match that arguably could have gone either way, England have moved on from the heartbreak that night and the controversial VAR decision that crushed their World Cup dreams.

A crowd of 12,000 is expected at Exploria Stadium for the latest chapter in the rivalry.

As the Lionesses prepare for the 2020 SheBelieves Cup, the rivalry with the U.S. is always there, and an England vs U.S. match — whether in a friendly tournament or a stage as grand as the World Cup — means a lot to the English squad.

The U.S. is often the team that most countries use to measure themselves for where they want to be, and the success they want to achieve. The U.S. have the championships, medals, and accolades, while England is still knocking on the door.

“Especially over the last few years, USA vs. England has been a big game,” Steph Houghton explained to The Equalizer. “We respect each other and I think that just shows the talent and ability we’ve got on both squads. When it comes to USA vs. England, it’s physical, competitive, and no matter what, both teams want to win. That’s been shown over the previous few occasions. They’ve got every right to celebrate. If you make a World Cup final, it only happens every four years. In terms of their ability and what they’ve achieved over the last few years as a team you respect them, but we remain humble, we keep concentrating on England and try to be the best team we can be.”

England manager Phil Neville will also be without Lionesses star fullback, Lucy Bronze. The Olympique Lyon product has remained with her club team as she looks to recover from a calf strain. The engine of the Lionesses attack will be extremely hard to replace.

“Lucy is going to be a big loss,” Neville said. “She’s one of the top three best players in the world.”

As Neville and U.S. coach Vlatko Andonovski prepare for their first head-to-head match-up against each other, there is a certain level of surprise Andonovski could bring, but the new American coach also hasn’t made a lot of changes to the U.S. team. In a sense, it’s still the same hungry, determined, and competitive USA.

The 43-year-old, Neville has a sense of intrigue by what the Andonovski might throw at the Lionesses.

“I think that’s the unknown really,” Neville said. “They have a new coach, he’s tweaked the systems a little bit, slight changes here and there and we obviously have a new-ish team as well. There’s something of an unknown going into the game about how our team will handle the occasion and how they will handle how to play against the USA, the best team in the world. That is the exciting challenge that we have a fresh approach to this game tomorrow but ultimately the challenge is the same – we need to overcome the best and that’s why we love coming to SheBelieves, you are pitting yourself against the best. That’s the marker for my team, the young players will see the level they need to get to.”

Alex Morgan won't be playing this time – but we expect she'll be following the action with a refreshing drink ☕️#TBT | @alexmorgan13 | @USWNT pic.twitter.com/JsNgOmNFDo

The reigning SheBelieves Cup holders have had success when they have come across the pond to play U.S. England beat the U.S. 1-0 at the 2017 tournament and the Lionesses played the Americans to a 2-2 tie in 2019.

“The games program we’ve got over the next 12 months pits us against the best teams in Europe and in the world because we want to be judged by playing against the best. We want our players, who all believe and want to play against the best in the biggest arenas, biggest stages. That’s the exciting challenge. We’re not fearful of failing. We are actually excited about the challenge that’s ahead of us.”

Results or style? For USWNT at SheBelieves Cup, it’s a bit of both

Results or style? For USWNT at SheBelieves Cup, it’s a bit of both
Press leads USWNT past England, 2-0, in opening SheBelieves match