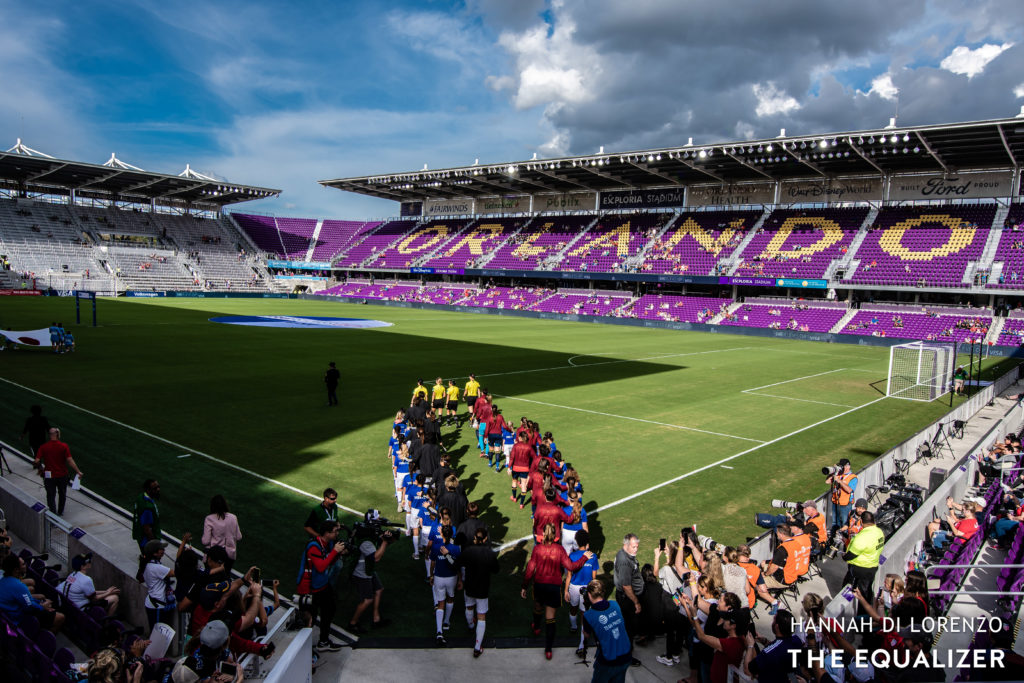 ORLANDO, Florida — It was a historic SheBelieves Cup win for La Roja on their tournament debut. Spain dispatched Japan with an impressive 3-1 victory. The 17th-ranked Spaniards played free-flowing, brilliant football, and earned an upset victory over 10th-ranked Japan.

Spain has often been a team with terrific skill and promise, but they just haven’t been able to find success at the European Championships and World Cup at the senior level. Spain have shown glimpses of the quality and potential they have, but it hasn’t always earned them big results. Thursday, however, was a big result.

When will Spain begin to prosper at the senior level?

Coach Jorge Vilda was pleased with his team’s win over Japan on Thursday night at Exploria Stadium, but he knows that an even bigger challenge awaits on Sunday in Harrison, New Jersey, against the United States.

“Japan is always among the best,” Vilda explained to The Equalizer post-match. “It was a difficult game and we are happy for being able to beat them. Yes, we are very happy for the win. We have to improve some things in order to face the current world champions on Sunday but I am happy with the performance of my team.”

Spain was able to use their speed and a wide attack against a surprisingly slow Japanese team. Alexia Putellas, Jennifer Hermoso, Marta Cardona, and second-half substitute Lucía García were off to the races. They were able to use pace and size to create time and space against a scattered Japan side.

Spain’s cohesion and chemistry were on display, too. Spain was able to break down on the flanks and deliver crosses into the Japan box. They created numerous chances by controlling the play and being patient with the ball.

The opening goal was a product of team work where everyone did their job to help setup Putellas, who was breaking into the Japan box. The 26-year-old was able to position herself to create enough space when Hermoso’s cross came into her path.

“Marta Cardona started the play,” Putellas described. “Then she passed to Jenni, and she assisted to me. It was a goal from the three of us. We are working hard. We have to keep on working and try to achieve more wins.”

How about Lucia Garcia!! Make that two for the Spanish forward! #ESPvJPN | 3-1 pic.twitter.com/pi7zu1T9zk

Spain won’t have long to celebrate this huge victory over Japan. The U.S. is up next on Sunday. The true test of a character for any team, is growing with momentum and confidence throughout a tournament. While defeating Japan was massive, Spain will have to show prove capable of another quality showing.

“Yes, Sunday is a big test,” Vilda said. “Facing the USA at their home is very motivating. We will try to win.”

A vibrant and chilly Red Bull Arena can be an intimidating venue for any football team. When you’ve got the U.S. at the other end of the pitch, it’s easy to make mistakes, and have bad habits. La Roja are taking a familiar Spanish approach to Sunday’s matchup.

“We are not thinking about the USA  game yet,” Putellas said. “We have to go step by step.”

Spain has been a team on the rise for several years. It’s now that could be the time that Spain finally has the players, coaches, and staff needed to find that consistency you need against top-tier football teams. Spain could be ready to step up and show greatness.