The Lowdown: Lisa Baird already has a vision 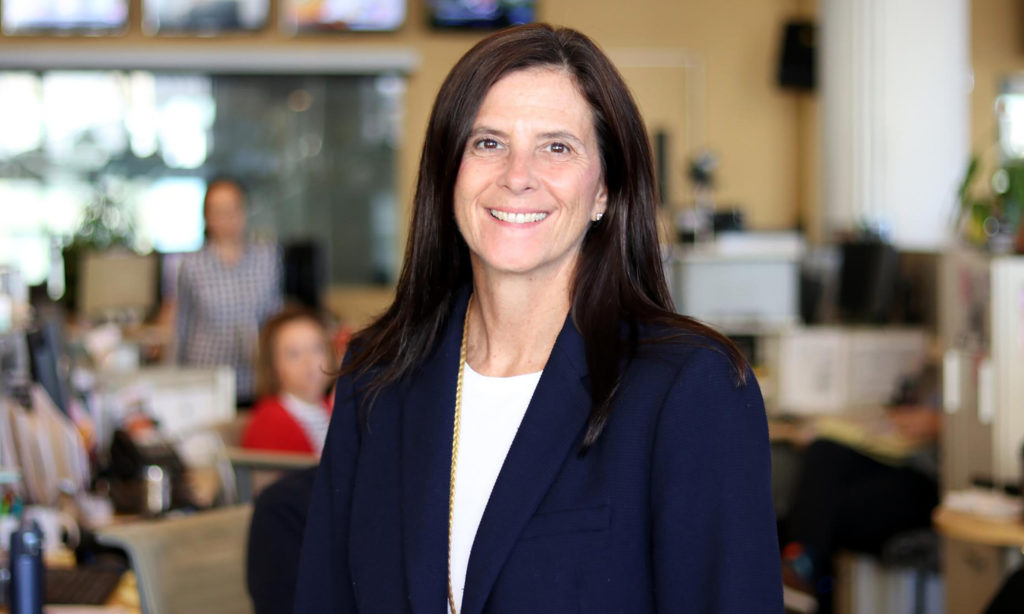 Lisa Baird met the media last week in a conference call a day after the National Women’s Soccer League announced her as its next commissioner. Baird will officially take the post March 10.

But to listen to the former vice president of marketing and consumer products for the NFL face her first firestorm of questions from a group of reporters anxious to have someone — anyone — available to answer questions, one thing was quite clear: Lisa Baird began her work as NWSL commissioner before she was even interviewed.

“She was very prepared,” North Carolina Courage owner Steve Malik said of Baird’s interview. “Clearly, this is a role that she wants to do. You always want that out of anyone you’re hiring. Frankly, we had a lot of good candidates. She needed to be prepared and she was. It was impressive.”

In one conference call, Baird has already distanced herself from her three predecessors in terms of being savvy with her pulpit. She was candid when she was able to be and appropriately standoffish when she needed to be. There is an art to turning press availability into usable material and, consciously or otherwise, Baird was able to do that.

The first question came fast and furious about an impending media arrangement. The question specifically honed in on Twitch, which bills itself as “the world’s leading livestreaming platform for gamers and the things we love.” Without missing a beat or showing even the slightest sign at being caught off guard, Baird threw out her answer.

“I can’t comment on any future media agreements yet — I’ve not even started,” she began. “I will tell you having really begun my career at the NFL by being the leader of Madden, which is still one of the most successful video games of all-time, I’ve had a longtime relationship with video gaming. And I’m very interested in esports, in its role not only as a community of engaged fans of women’s soccer but because of its growing reach as a streaming entity of itself. So, I’m excited to work with the players and owners to see if we can engage this passionate community of sports fans.”

A league that has long been desperate for someone in a leadership role to tout their own product may well have found that person in Baird. At one point on the call, she referred to NWSL commissioner as her dream job. For a league where, outside the players, very few view their jobs as professional endgames, that means a lot for many people to hear.

Of course, there is more to the job than just offering good answers to the media and being well prepared. This could be a repeated sentiment, but the NWSL is at a point where it must move forward or risk being left behind. Baird said she did not have a specific plan laid out for her first 100 days on the job yet, but she intends to.

“The plan will be informed by owners’ council. I will certainly be talking to the key stakeholders like U.S. Soccer,” Baird said. “But also, I want to talk to the incredibly talented league staff because I’m going to rely on them heavily to point me in the right direction.”

Baird went on to volunteer that there would be three things that she expects will characterize her first 100 days as NWSL commissioner (if you’re trying the math in your head, the 100th day from March 10 will be June 17.) Here’s what she had to say:

“The first thing I intend to do is I want to get out to all the markets, not only to meet the team owners one-on-one in their market but also get a sense of their staffs. Obviously I’m really lucky that I will hopefully be combining it with a game because it’s always a privilege and kind of exciting for me personally to connect with the fans. So that’s going to be No. 1, to go out into the market, to be at games and with the owners.

“The second things is… I’ll be engaging in meetings and phone calls with all of the stakeholders around women’s soccer. That’s going to be a learning process for me. I was pretty overwhelmed by how many people not only that I knew, but that are anxious to see the league succeed, have reached out to me over the last literally few hours to offer their council, help, in any way. So, sorting through who I can talk to immediately will be really important. For me personally, I have already talked to the leaders of the PA [NWSL Players Association] and getting meetings with them early is very important.

“Thirdly, as you know there are exciting announcements to come. I’m working with everybody I need to to make sure that the eighth season starts smoothly and well from an operations perspective.”

It remains to be seen exactly what Baird believes is a smooth start operationally, but few would intimate that many prior seasons have had one. From announcing the site of the NWSL Championship during the first half of the opening game of the season to the wonky launch to the go90 era, NWSL opening day has often been met with angst.

Before putting a wrap on her answer to the 100 days question, she added a small but important note about sponsorship.

“I also think that talking to who I think [is] on the prospective sponsor list will be really important early on,” she said. “That will be something that the owners and I will want to make a real priority going into this season.”

Sponsorship is a simple concept. Sponsors mean money and the more money the owners bring in, the more they should be able to invest back into their teams, and the more stable the league will become. It has not always come easy, though. Budweiser jumped on board at the tail-end of the World Cup, but no other major sponsors joined the fray in the months just after. Four years ago, after the 2015 World Cup, then commissioner Jeff Plush got in a testy exchange with a reporter intent on pointing out the lack of sponsor dollars that followed the popular victory.

“We have a lot of opportunity in front of us,” Malik said when asked about areas the league needs immediate improving on. “Everything from some of the relationships with U.S. Soccer to media deals and the future of expansion. All of those are topics that the commissioner is going to have their hands all over. There are big issues and opportunities in front of the league. We have competition not only from international leagues and federations that are starting to invest more but also domestically. Handled the right way, those are opportunities.”

The relationship with U.S. Soccer is actually the elephant in the virtual room. Everyone knows that without U.S. Soccer’s involvement, the NWSL would not exist. The relationship came with an expiration date that remains as necessary as it is vital. Recent talks between owners and the federation failed to create a path to dissolving or even evolving the partnership. As such, 2020 will operate the same way the prior seven seasons have — with the federation as managing partner.

Baird came armed with an answer to the inevitable question about the league’s sometimes complicated relationship with its overlord. And she managed to say it all without saying too much.

“The relationship with U.S. Soccer has been very important for the league,” she said. “Not only the financial but the other support they’ve provided over the early years of the league has been very important. I’m personally glad that the management has been extended through our current year. That provides some stability and it gives me a chance to work with the owners on the growth trajectory, financially, for the league.

“I’m not coming in with any preconceived notions. I have worked with U.S. Soccer and their leadership for a decade when I worked at the USOPC {US Olympic and Paralympic Committee where Baird was Chief Marketing Officer]. But I also know that the owners and I are going to have and develop our own independent vision for where we need to be as a league. No matter what specific contractual support there is, I suspect there will always be a close, collaborative relationship with the federation.”

It’s probably a good thing Baird is already so engaged in her job, because there will be plenty to keep her busy once the clock starts ticking on March 10. She said she has already fielded calls from friends in the marketing industry excited for her to have gotten the job and who may want to become partners with the NWSL. There is always goodwill to start, however. Finding interested parties is a far cry from getting a signature that commits any amount of money.

But the NWSL has hitched its wagon to Lisa Baird and the very early going has been smooth, possibly even ahead of expectations.

“From everybody that I’ve heard from since we’ve made the announcement, very, very positive comments,” Malik said. “So it’s not just me. I think she’s well suited to take the league where we can go.”

— The Becky Sauerbrunn trade was made official on Tuesday. The Equalizer first reported the trade on Feb. 25. She is going to play for Portland Thorns FC. In return, Utah Royals FC receive Elizabeth Ball, $100,000 in allocation money and a chance for another $50,000. The condition is believed to be Sauerbrunn’s presence on the Thorns roster in 2021. Last week’s Lowdown was dedicated to this trade which was still not finalized, and some straight soccer analysis from me is included in our Transaction Tracker.

— It was enlightening to hear that when Sauerbrunn agreed to join the Royals in 2018 that they discussed back then the possibility of her eventually wanting to play in Portland, where she lives with her boyfriend.

— It was also quite evident reading and watching Sauerbrunn material since the trade went official that she really is uncomfortable being the center of attention as she is currently — at least for the day.

— Wouldn’t it be great if Lisa Baird’s first visible act as commissioner was to let us know where the NWSL Championship is going to be this fall?

— Actually, in the shorter term, we know preseason begins March 9 and the regular season April 18. We don’t yet know the roster limits and cutdown dates in between.

— One good thing about SheBelieves Cup intersecting with the start of preseason is that players on international duty do not count toward camp limits. That gives teams a few days to look at some additional players before U.S. and other internationals arrive.

— Congratulations to The Equalizer photographer Hannah di Lorenzo, who will be starting physical therapy school at Nova Southeastern University this spring. Unfortunately for us, that will mean less time for Hannah to shoot games and events for the site. She’ll still be around from time to time, though, including for Thursday’s SheBelieves Cup matches in Orlando.

When will Spain begin to prosper at the senior level?
Results or style? For USWNT at SheBelieves Cup, it’s a bit of both