With the conclusion of the last week of the regular season, the Westfield W-League semifinals are set as Melbourne City will host playoff debutants Western Sydney Wanderers while Melbourne Victory will attempt to overcome Sydney FC for a second consecutive match, after defeating them 3-1 this past weekend to capture second and hosting rights for the playoff tiff in two weeks’ time.

Japanese veteran Yukari Kinga (a 2011 Women’s World Cup winner, and runner-up in both the 2015 Women’s World Cup and 2012 Olympic Games) had a very strong game in Melbourne City’s 3-1 win over Brisbane Roar on March 1. Kinga had 94 touches (tied with Steph Catley for most on both sides), an 88% passing efficiency on 75 passes (the most on either team) won 6 of 8 duels and assisted on two goals, both by U.S. import Ally Watt (who has three goals in three games as a late-season signing ahead of her first season with the North Carolina Courage in the NWSL).

Reign FC’s Darian Jenkins scored with a left footed blast from the top of the box in the 49th minute — after being blocked with a right-footed attempt seconds earlier, for which Sydney FC goalkeeper Audrey Bledsoe (Washington Spirit) did not have a chance to even move for the ball — to give Melbourne Victory a 2-0 lead in their eventual 3-1 win over Sydney on Feb. 29 in front of 3,350 fans (the first match before a Victory A-League game).

From sharp reflexes to full-extension showstoppers, the Save of the Round nominees are out of this world 🌏#WLeague pic.twitter.com/0PYUsI0bdl

Jenkins added a second exceptional goal (her fifth of the season) later, in the 78th minute, when she stripped Sofia Huerta (who will be her teammate this season in the NWSL after Huerta’s recent trade from Houston to Reign FC) of the ball on the right side, dribbled into the box from about 20 yards away, juked Amy Sayer who was trying to head her off and then roofed the ball into the net past Bledsoe. The win allowed Victory to leapfrog the reigning champions for second spot and they will meet again in two weeks’ time in the semifinals, with Victory hosting the rubber match of the series for this season, as both teams won at their home venues this season.

🤩 Oh my! How about THAT solo run from @darian_jenks?!#MVCvSYD #BigBlue #WLeague

Save of the Week: Casey Dumont, Melbourne Victory

Melbourne Victory goalkeeper Casey Dumont has been stellar all season and she pulled off another flying save from Sydney FC’s Amy Sayer’s blast from ten meters beyond the penalty box in the 30th minute to maintain Melbourne Victory’s 1-0 advantage in their 3-1 victory at home on Feb. 29.

From sharp reflexes to full-extension showstoppers, the Save of the Round nominees are out of this world 🌏#WLeague pic.twitter.com/0PYUsI0bdl

North Carolina Courage American loanee Kristen Hamilton demonstrated how important she has been to the Wanderers this season with a brace within the first 30 minutes of the game, propelling Western Sydney Wanderers to their 3-2 victory over Perth Glory in Bunbury (two hours south of Perth in Western Australia) on Feb. 29. The win cemented the Wanderers’ first playoff berth in what has been a historic eighth W-League season for the club. Sam Stabb (Washington Spirit) had the initial Wanderers goal in the 3rd minute and Perth fought back with two second-half goals by Reign FC teammates Celia Jimenez and Morgan Andrews, but couldn’t prevent the Wanderers’ second win in their last six matches, both coming against the Glory.

With the two goals, Hamilton ended up in a tie for the Golden Boot with seven goals on the season with Andrews, Natasha Dowie (Melbourne Victory) and Remy Siemsen (Sydney FC)., though Hamilton and Andrews played in 11 games, with the other two appearing in 12. The seven goals total is only the second time that the Golden Boot award has gone to someone scoring fewer than a double-digit tally, with Lenna Khamis (now Canberra United) scoring seven for Sydney FC in the inaugural season of 2008/09, when each team only played 10 matches.

Though the Wanderers and Sydney FC tied for third spot in the standings, Sydney was seeded third for the playoffs with a superior goal differential (+8 to +4) over the Wanderers.

Isobel Dalton left Brisbane Roar before the last game of the season to join Scottish League powerhouse Glasgow City. Dalton has played in England briefly with Bristol City and in the U.S. at Lindsey Wilson College and the University of Colorado. Dalton (22) had a trial at Nottingham Forest before joining the Roar for her first season since playing one game there in the 2014 campaign. In 2019/20 she played in 11 matches.

Mallory Weber wants to return to Adelaide next season

Adelaide United forward Mallory Weber (on loan from the Utah Royals) wants to return to the W-League next season. Weber scored the winning goal in Adelaide United’s 2-1 home win over Newcastle Jets on Feb. 27, lifting the Reds into a tie for eighth place with the Jets, but pushing the Jets into last place on goal difference (+15 to +12). Adelaide was much better all season than their record indicates, starting their first five games of the season with consecutive one-goal defeats — including games against City, Sydney FC and Western Sydney. Weber finished as the club’s top scorer with 4 goals (ahead of teenager Mary Fowler, who left the club late in the season and recently signed with Montpellier in France).

Weber indicated to Fox Sports television correspondents after the game that she wanted to return to the club for the 2020/21 season. “I’m looking forward to coming back next year and doing a little better,” she said. If she does return, Weber will be an important piece for Adelaide to build around as they attempt to make the playoffs for the first time ever. Weber’s profound impact on her side will be noted in our annual awards edition after the semifinal review, scheduled for March 16, after the international break for the Asian Football Confederation’s two-leg finals, including Australia (ranked seventh in the FIFA national team rankings) playing Vietnam (ranked 32nd), though the other matches between China and Korea Republic have been postponed for a month as a precaution because of the Covid-19 outbreak. 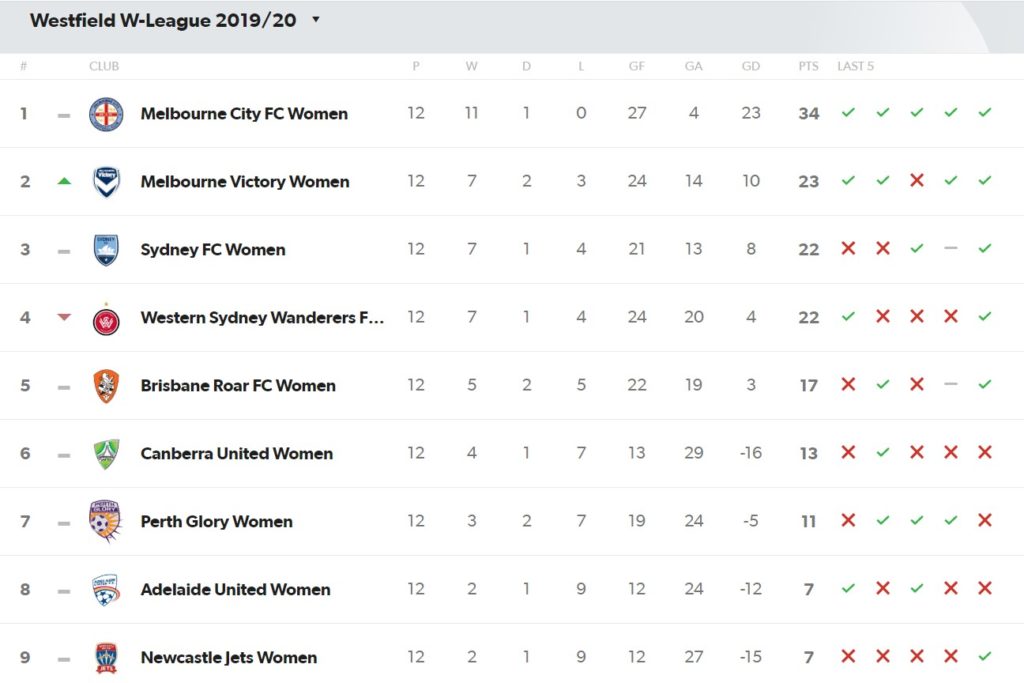