The Lowdown: What to make of the impending Becky Sauerbrunn trade 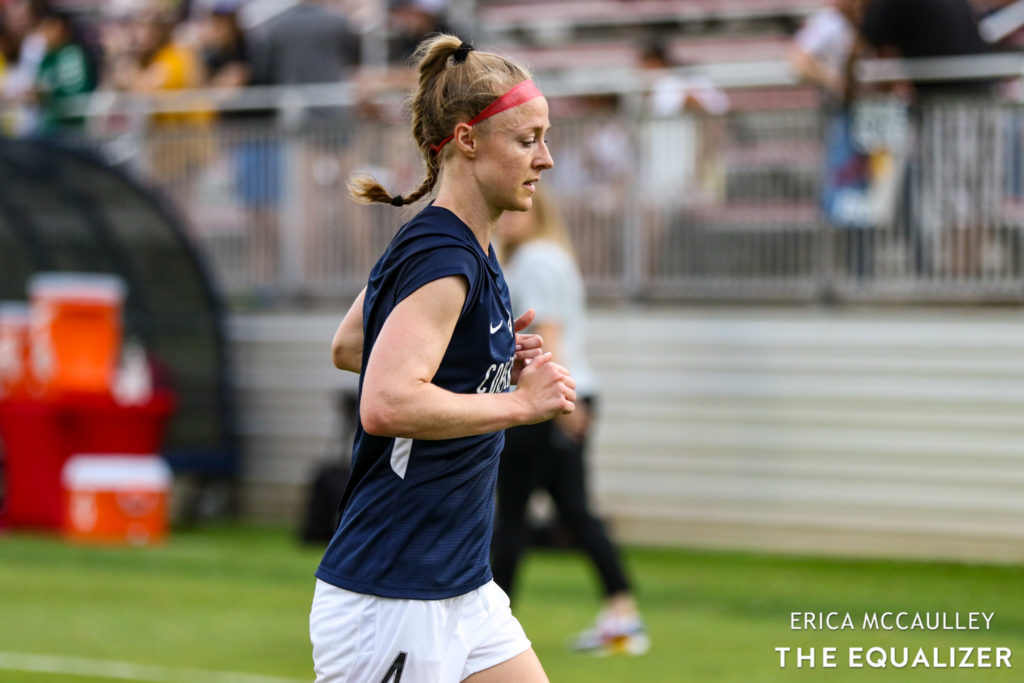 At some point in the next week or so, the Utah Royals and Portland Thorns are expected to announce a significant National Women’s Soccer League trade. As first reported by The Equalizer and Meg Linehan of The Athletic, the crux of the deal has Becky Sauerbrunn heading to Portland.

Is this a blockbuster trade? That probably depends on your definition of blockbuster. The final details of this one are not yet known — possibly not even set in stone — but what is certain is that there will not be any major names heading to the Wasatch Mountains. The return package is expected to be centered on a pile of allocation money and include a player who isn’t going to directly replace Sauerbrunn. The trade a headline grabber, but it’s not to the level of Sam Kerr, Carli Lloyd, and Christen Press all changing teams at the same time, as was the case on draft day in 2018.

Jeff Kassouf provided a strong analysis about what the trade will mean to a Thorns team that is trying its best to succeed by trying to find the sweet spot between youth and experience. The trade also provides a glimpse into where the eight-year old NWSL is as it attempts to navigate through and survive in a crowded sports landscape.

The trade appears to be the product of Sauerbrunn asking for a move to the Pacific Northwest, where she lives with her boyfriend. The move nearly happened two years ago after FC Kansas City folded but the Royals — who replaced FCKC without actually taking over the franchise — convinced her to play in Salt Lake City.

NWSL players being traded to the location of their choosing is nothing new. When Sydney Leroux was sent to Western New York, she told anyone who would listen that she didn’t want to be there, and was eventually moved to Kansas City, where her husband Dom Dwyer was playing at the time. Dwyer eventually went to Orlando and Leroux soon followed. Alex Morgan also went to Orlando in part because her husband, Servando Carrasco, was at the time playing there in MLS. The Kerr-Lloyd-Press deal was motivated by varying levels of requests from all three players.

These hijinks are not limited to marquee players, either. Many trades have been scuttled over the year as rank-and-file players have threatened to retire rather than leave their home market, or, in some cases, rather than be traded to a specific market. And that practice in women’s soccer dates all the way back to WUSA. The biggest trade that league ever saw allowed Aly Wagner to be drafted by the San Diego Spirit and eventually vaulted Shannon Boxx onto the national team. Sherrill Kester was also in that trade, going from the Spirit to the New York Power. But Kester had wanted to play in North Carolina and threatened to retire if not given that chance. The Power eventually agreed to trade her back to the Spirit. (Kester was ultimately waived, then joined the Courage for preseason but did not make the team or appear in WUSA again.)

Let’s also not kid ourselves about trades in other major sports. They are often driven by player requests, whether to be in a certain town or with a certain player. There are two things those leagues have that the NWSL so far does not. One is financial stability to the point that a retirement threat would be a bluff worth calling. The second is free agency. The NWSL still has no mechanism where players can look ahead to a time where they are free to choose their employers.

The rub here is whether or not these turn out to be good soccer trades. Morgan took her share of criticism for going to Orlando, but it doesn’t take too deep a dive to realize that trade was largely responsible for the Thorns winning a Shield and an NWSL Championship over the next two seasons, with another trip to the final in the third. The Pride, meanwhile, caught lightning in a bottle for half a season with Morgan but have largely been chasing the assets given up in that trade through the club’s first four seasons.

This Sauerbrunn trade has the initial look of a white-flag deal. Take Sauerbrunn out of the Royals’ back line and there is not a ton there that inspires a belief that the team can get better after near-misses for the playoffs the last two years. It also sends a message around the league that players can congregate in a few major markets at the expense of the rest of the league.

But allocation money changes everything…

Anyone who follows me knows about my offseason trade theorem that you cannot judge a trade or any other move until you see the final product. Anyone who follows MLS knows that the implementation of various forms of allocation money make many trades literally impossible to analyze. This trade covers both of those ideas.

I have reason to believe the Royals are sitting on, or at least deep in talks with, a prominent international signing. Perhaps whatever allocation money they are set to acquire from the Thorns is necessary to seal that deal. And let’s face it, as good as Sauerbrunn is, she is 34 and at the end of the latest international cycle. A younger replacement would not be the craziest idea in the world.

Emily Menges is 27 and would have been a strong replacement for Sauerbrunn. But I’m told she is not part of the trade and so instead of replacing Sauerbrunn in Utah, Menges will partner her in what will immediately be one of the top center-back pairings in the NWSL. Whether or not the Royals pushed for Menges to be included was not immediately clear.

The deeper point here is that the addition of allocation money is a factor that makes analyzing trades a slower process (follow analysis on our NWSL Transaction Tracker). But maybe the Royals have a plan. And maybe that plan will be realized this season, maybe down the road. Or maybe not at all. We just won’t really know without many tangible assets included in the deal.

Is there a problem in Utah?

It seems that Sauerbrunn’s trade request was more based on wanting to be in Portland as opposed to not wanting to be in Utah. Still, it is interesting that it comes now during the same offseason in which the Royals lost their coach and several players to retirement.

So far this offseason, the club has seen Mandy Laddish, Erika Tymrak, and Sydney Miramontez announce their retirements. The team also traded away Makenzy Doniak and Katie Stengel without getting any players back, and waived Becca Moros.

Cause for concern? We’ll see. But Utah is not currently operating like a team near the top of the NWSL food chain.

— The full NWSL schedule finally dropped and here are some quick thoughts:

— It appears the Spirit-Reign opening match on April 18 was moved to a 1 p.m. ET start from 7 p.m. Could that be for television? Color me surprised if so, with an NWSL Championship rematch on the docket for that day.

— The first midweek match, April 29, is also the first Courage-Thorns match of the season. Unless that one is getting on TV, that seems entirely avoidable.

— No games on Mother’s Day is a good move. It sounds nice, but without some major marketing, Mother’s Day has proven to be a black hole for attendance.

— The second Courage-Thorns match is August 1 during the Olympics

— The Olympic break is a week like last year’s for the World Cup break. Not ideal, but neither is there a better solution I can come up with.

— August 29 is Reign v. Thorns by day and Courage v. Red Stars at night. It’s a long way until then, but that seems like a great day of soccer. Can we get them both on TV?

— Two weeks off between the final week and the semifinals is downright awful, even if the combination of television availability and the FIFA calendar makes it somewhat understandable. It is doubly awful with an odd number of teams forcing someone to sit out every weekend. If the Pride make the playoffs, they will have 29 days between their last regular-season game and the semifinals. At least the Pride are the right team to hand that distinction to. They finished last in 2019. That doesn’t mean they won’t be a playoff team this year, but if you have to do it to one team, it may as well be your bottom-feeder.

— The NWSL Championship will be Nov. 14. Book your tickets. Or don’t — since we don’t know where it will be.

— This is the second Lowdown since Amanda Duffy officially left as NWSL president and that no one seems to know exactly who’s in charge.

The latest: The top-of-the-table clash between Manchester City and Chelsea did not disappoint with the teams combining to score four goals in 16 minutes starting at the hour mark en route to a 3-3 draw that left fans wanting more and Man City a point ahead in the table. Chelsea though, remain with a match in hand. Arsenal fell four points off the pace after their match against Reading was postponed. Meanwhile, Bristol City rode an Ebony Salmon goal to a 1-0 win away to Birmingham City that moved them off the bottom by two spots. They were replaced in the basement by Liverpool.

The latest: Status quo as usual with Lyon crushing Montpellier 5-0 and PSG taking care of Guingamp away 4-1. There is consternation though over the showdown between the two in Paris when league play resumes March 14. That is only four days after France takes on the Netherlands in what will be their third match in a week. A majority of the national team play club soccer at Lyon and PSG.

The latest: A week after getting blown out by Wolfsburg, Hoffenheim’s Cinderella season took another hit when they went to Essen and despite scoring first, fell 3-2 to slip to 3rd. Bayern Munich took full advantage with a 3-1 win over SC Sand and rose to 2nd to sit in the second Champions League spot. Leaders Wolfsburg rolled 5-1 over Turbine Potsdam to say six points clean. Koln v. Jenna, a match with key relegation ramifications, was postponed.

The latest: Asisat Oshoala had a hat trick in Barcelona’a 6-0 plastering of Logrono. That kept the leaders nine points clear of Atletico Madrid, who escaped the Madrid Derby with a 1-0 win over Madrid. It also brought Oshoala even with teammate Jenni Hermoso in the golden boot race. Both have 20 on the season. The relegation battle also had some twists as Valencia moved up two spots to the safety zone with a 0-0 draw against Rayo Vallecano. Real Betis drew Athletic Club 2-2 despite leading twice and moved from the relegation zone into the playoff spot. Meanwhile Sporting de Huelva fell 5-1 to Deportivo and fell two spots to 14th. Those three are all on 17 points with Madrid just two ahead. Winless Espanyol are on 4 points and all but certain to go down.