Representatives of the U.S. Soccer Federation and United States women’s national team players on Thursday each filed motions for summary judgments in the ongoing equal pay lawsuit between the parties.

U.S. Soccer seeks a dismissal of the lawsuit, while players presented an expert opinion who pins the total back-pay due to players in the Equal Pay Act class at just over $60 million, and total Title VII back-pay damages of over $66 million, with more to be sought in punitive damages at trial in May.

The federation states throughout its filing, as it has throughout this years-long legal battle, that it is committed “to pay fair and equitable compensation” to all its national teams. The federation’s introduction reads, “U.S. Soccer is aware of the public narrative surrounding this lawsuit, but the undisputed facts tell a much different story, and the Court sits to render judgment based on the actual facts in the record and the governing law.”

“At the moment, the Women’s National Team players are paid differently because they specifically asked for, and negotiated, a completely different contract than the Men’s National Team, despite being offered, and rejecting, a similar pay-to-play agreement during the past negotiations. Their preference was a contract that provides significant additional benefits that the Men’s National Team does not have, including guaranteed annual salaries, medical and dental insurance, paid child-care assistance, paid pregnancy and parental leave, severance benefits, salary continuation during periods of injury, access to a retirement plan, multiple bonuses and more.”

Molly Levinson, spokesperson for the USWNT players, rejected that premise in a statement issued late Thursday: “In the most recent CBA negotiation, USSF repeatedly said that equal pay was not an option regardless of pay structure. USSF proposed a ‘pay to play structure’ with less pay across the board. In every instance for a friendly or competitive match, the women players were offered less pay than their male counterparts. This is the very definition of gender discrimination, and of course the players rejected it. As the players included in their summary judgment brief, the USSF official who took notes of the bargaining sessions admitted under oath at his deposition that the USSF never offered the WNT equal pay in bonuses for friendlies, in compensation for the World Cup or in compensation for other tournaments.”

Additionally, the players’ representatives have requested a Daubert motion to exclude the USSF’s experts from testimony at trial. Their argument reads, in part, that “USSF offers three experts—Mr. Philip A. Miscimarra, Ms. Carlyn Irwin, and Dr. Justin McCrary—whose opinions are wholly or, in significant part, irrelevant to the issues at hand, contrary to governing legal standards and virtually certain to engender juror confusion and needlessly complicate and prolong the trial.”

The two parties fundamentally disagree on whether U.S. Soccer’s funding of the National Women’s Soccer League — and certain U.S. player salaries for those participating in the league — should count toward the federation’s pay to players through the years. U.S. Soccer notes it pays “more than $1 million annually to cover players’ salaries while playing in the National Women’s Soccer League.”

Players reaffirmed their position that NWSL play is separate work from what’s constituted under their U.S. Soccer duties and therefore requires separate (additional) pay. They reaffirmed that in Thursday’s filing through expert exhibits. This one, from economist Finnie Bevin Cook — vice president of the firm Deiter Consulting Group, Inc. d/b/a Deiter, Stephens, Durham & Cook — lays out the case for the additional work:

“A USWNT player’s participation as a player for an NWSL team is a job separate and apart from her job as a member of the USWNT soccer team, as illustrated by the fact that not all USWNT members are paid by USSF to play on an NWSL team and most NWSL players are not USWNT members. Participation on an NWSL team requires a class member to play in additional games and attend additional practices. Other NWSL players who are not part of the USWNT receive payment for their participation on their respective teams by their respective clubs. Some USWNT members have exercised their rights under the CBA to play for other professional club teams during the period of the CBA in leagues other than the NWSL, further demonstrating that NWSL participation is a separate job from playing on the USWNT.”

Players who would be eligible for back-pay in the event of a ruling in favor of the plaintiffs are laid out in the tables below. These categories are defined as follows: 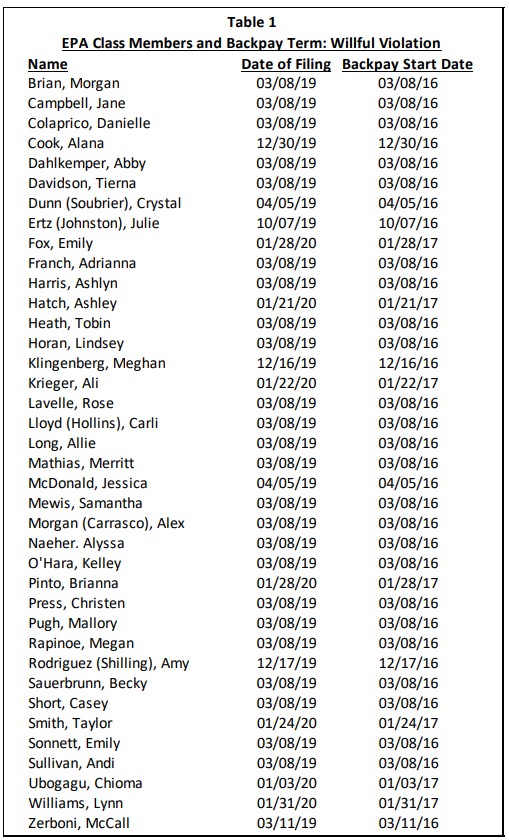 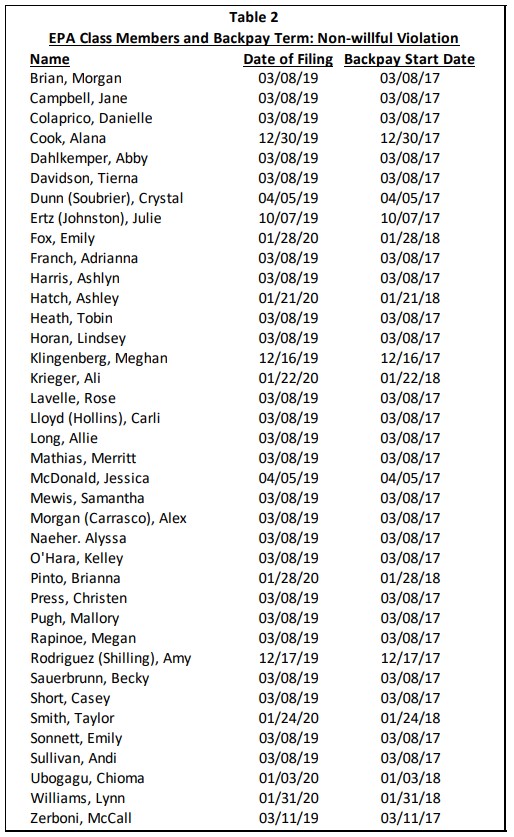 The players in the Title VII damages class — Title VII of the Civil Rights Act of 1964 — are determined from the records of the federation. The back-pay damage term for the class is from April 6, 2014 through the May 5, 2020 trial date. 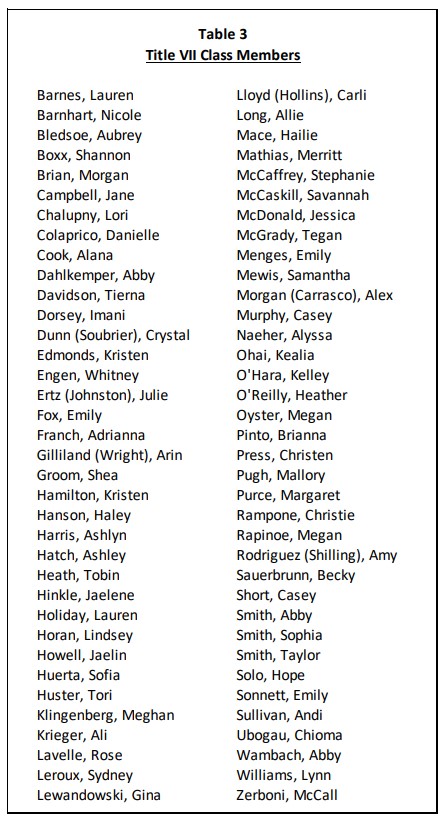 A handful of players were excluded from the players’ expert analyses which calculated the amount of back-pay owed, based on factors which include limited time on the U.S. national team within the class period, or inability to receive compensation due to NCAA eligibility rules.