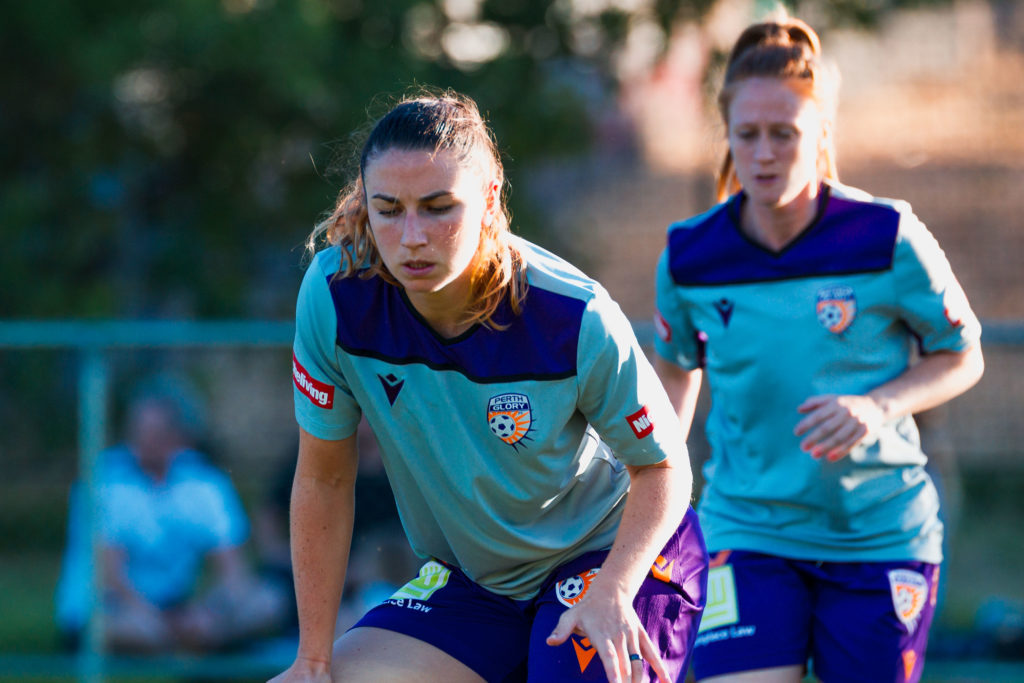 The Westfield W-League returned to action after a long international break for Olympic qualifying. We’re here to get you caught up on all the action.

American Morgan Andrews (on loan from Reign FC) scored twice within the first 25 minutes to lead Perth Glory to a 4-2 home victory over Brisbane Roar on Feb. 16, which was one of the surprise results of the season so far, as the loss severely damages Roar’s playoff hopes and would be the first time they have not appeared in the semifinals since 2016/17.

The Perth win was only their second of the season, both coming in the past two rounds. Andrews scored on a header in the box from a Crystal Thomas (who played for the Washington Spirit in 2019) cross in the 3rd minute and then scored her second goal in the 25th minute from the penalty spot after Roar center back Clare Polkinghorne handled the ball in the box from Andrews’ long cross. Andrews, who won an NCAA College Cup at USC in 2016, now leads her side in goal scoring with four in her first season in Australia.

Claire Emslie, the Scottish international and Orlando Pride loanee, scored in the 31st and 50th minutes to help her side stay undefeated in the league in 10 matches as Melbourne City swept the Melbourne derby this season with a 4-0 win over Melbourne Victory on Feb. 16. Both goals were well worked.

On her first goal, Emslie skillfully avoided Victory goalkeeper Casey Dumont on the left side of the penalty area and then fired the ball into the net from about 5 yards out on the right side. Her second goal was even better and quite unique. Again, Dumont raced out of the box to face the streaking winger but Emslie’s first shot struck Dumont and skied into the air, but she followed it past Dumont and volleyed it before it hit the ground into the empty net. Emslie finished with 10 of her side’s 25 shots, double that of teammates Emily Van Egmond and Kyah Simon, who each scored once, while Victory could only muster six shot attempts. Emslie now has three goals in her first W-League season. At this point, the two sides could face each other again in the semifinal round for the third time this season.

Certainly Emily Van Egmond (Orlando Pride in 2018 and 2019) deserves an honorable mention from her floated shot from the top of the penalty box into the upper corner of the net past Dumont for City’s first goal in the 21st minute, which was her sixth tally of the season, tying her with the Victory’s Natasha Dowie for second in the league. Van Egmond scored four goals in her last two games earlier in the week in the AFC Olympic Games qualifiers third round (see below).

In the 31st minute, Adelaide United goalkeeper Sarah Willacy made a flying save to tip Canberra United’s Leena Khamis’ shot over the crossbar in her side’s 3-1 loss in Canberra on Feb. 16. Khamis later scored on Willacy in the 67th minute for a 2-1 lead, after which all the players went to the bench to embrace departing Greens coach Heather Garriock (see below). Willacy has been one of the top players all season for Adelaide and faced 7 shots during the game and saved 4.

Cat-like between the sticks 🙀

Sofia Huerta, recently traded from the Houston Dash to Reign FC ahead of the 2020 season, assisted on Sydney FC’s first goal of the game by Veronica Latsko (Houston Dash) in the 2nd minute and then scored her side’s third goal (her third of the season) in second-half injury time of Sydney FC’s 4-0 derby win over Western Sydney Wanderers on Feb. 15. The Wanderers lost Kristen Hamilton (North Carolina Courage) to a second yellow card in the 67th minute. Huerta was instrumental in the win, with four crosses, winning seven of eight duels and being fouled three times for changes of possession. The win allowed Sydney to pass the Wanderers into second place on the table, with a three-point gap with two games remaining for each club. At this point, the two Sydney clubs seem on a path to again meet in the semifinals, but the second-place side would host that potential game.

Canberra United‘s 26-year-old defender and co-captain Nikola Orgill has signed with Kolbotn of Norway, joining the side after the W-League season is completed in March. Orgill is a lawyer and was in her second season in the capital, having previously played for the Newcastle Jets and Western Sydney Wanderers for one season each.

Adelaide United’s 16-year-old sensation Mary Fowler, who has four caps for the Matildas and was on the squad in France but did not see action, has been released by the Reds to pursue a club abroad, which on Monday was announced as French side Montpellier. She scored three goals in seven games and contributed to the Reds’ bright play all season, which unfortunately was not reflected in their standings position. Fowler has participated in trials for FA Women’s Super League clubs Chelsea, Manchester City and West Ham United in 2018. The Reds signed local products Ella Tonkin and Victoria Mansueto for the rest of the season.

Lynn Williams is released from her Western Sydney Wanderers contract

On Feb. 16, the Wanderers announced that they have released North Carolina Courage loanee Lynn Williams from her contract for the rest of the season so that she can focus on her U.S. national team duties for the upcoming SheBelieves Cup. Williams had four goals in her first W-League season and her significant attacking impact will be missed by the Wanderers as they enter their first ever playoff campaign. She did not play in the 4-0 defeat to their crosstown rivals.

Ally Watt is a late-season addition at Melbourne City

Melbourne City made a late signing before the end of the season in U.S. youth international Ally Watt (Texas A&M University), who was picked sixth overall by the North Carolina Courage in the 2020 NWSL College Draft last month. Watt represented the U.S. at the FIFA U-20 World Cup in 2016 in Papua New Guinea. Last season, City signed Hallie Mace at a similar point in the season, and she went onto play for Rosengard in Sweden after being selected second overall by Sky Blue FC in the 2019 College Draft. Mace will be a teammate of Watt’s at North Carolina this coming season after the Courage traded for her rights.

Sydney FC signed Canadian international forward Lindsay Agnew for their end-of-season games and probable playoff matches. Agnew has been capped 14 times and was on the side that played in France last summer. She played the last two seasons with the Houston Dash, who recently released her, and was a rookie with the Washington Spirit in 2017. She played collegiately at Ohio State University and was born in Canada but raised largely in New York State and Ohio.

Agnew, who joins former Dash teammates Huerta and Latsko in Sydney, is viewed as a fill-in for Australian internationals Caitlin Foord and Chloe Logarzo, who both recently left the side to join Arsenal and Bristol City, respectively, in England.

The Brisbane Roar, who were successful in signing Rylee Baisden (ex-Pepperdine University) from the amateur Australian state league in the offseason, signed another American from the NPLW Queensland league. Connors, a native of Connecticut, played at St. John’s University and in the WPSL with Yankee United FC. She scored 25 goals for Logan Lightning in 15 appearances in Australia this season, with six goals in one match. The Roar lost Hayley Raso to Everton in England during the season. Connors has said, “The Westfield W-League compares a lot to the NWSL, which is where I want to reach one day.”

Garriock’s contract is not renewed at Canberra

In a move that is not a surprise to many who follow the W-League and was even expected at some point, Canberra United announced that Heather Garriock — who played with the Chicago Red Stars in WPS in 2009 and appeared in three Women’s World Cup and three Olympic Games for the Matildas — will not be retained as head coach after this season. She inherited a squad three years ago that won the 2016/17 W-League Premiership title as regular-season champions under now Australian U-17 national team head coach Rae Dower, but has missed the playoffs in her three seasons in charge, finishing fifth and then eighth last season. This season, they had three victories and one tie in their first six matches and were in the playoff reckoning, but entering this weekend’s action, were on a four-game skid, with zero goals for and 15 against.

Garriock did help develop current Matilda Karly Roestbakken (19) and other talent through the club’s academy system and brought in some creative international choices into the league, including South Africans Rhoda Mulaudzi (who had four goals in 12 games last winter and is now with Apollon of Cyprus) and Refiloe Jane (who had two goals in 10 games in Canberra in 2018/19 and is now with AC Milan in Italy) who both were on South Africa’s World Cup squad last summer. They played with Chilean 2019 World Cup team member Maria Rojas, who last fall appeared in the UEFA Women’s Champions League with Slavia Prague of the Czech Republic. This season, American Simone Charley from the Portland Thorns has been a revelation with her speed and guile. Garriock will learn from her experiences in Canberra and should reappear soon as a coach with a club in Australia or abroad.

Camila out for the rest of the W-League season

Matildas Win Group B over China, faces Vietnam next month

Australia’s women’s national team won Group B of Olympic qualifying to advance to play Group A runner-up Vietnam, with the first leg of the two-match final set for Newcastle in New South Wales on March 6. Australia defeated Taiwan 7-0 on Feb. 7 in suburban Sydney with three goals from Arsenal’s Caitlin Foord. On Feb. 10, Australia eliminated Thailand in a 6-0 win, with Emily Van Egmond (Melbourne City) scoring a hat trick along with one assist, and her City teammate Ellie Carpenter and Sam Kerr each contributing two assists, while Kyah Simon (Sydney FC) had two goals.

On Feb. 13, in the group decider against China — who also had sizeable wins over the other two Group B sides — Van Egmond was again the hero as she rescued her side with a 92nd-minute goal from a Simon assist to tie China 1-1 in Parramatta (the home of Western Sydney Wanderers), winning the group on goal difference (+13 to +10). Tang Jiali (Shanghai Ladies) gave her side the lead in the 86th minute before Van Egmond’s heroics. Both Jiali and Van Egmond finished with four goals to lead all scorers in both groups.

China will face Group A winner Korea Republic, which should be a close affair as the two sides drew 0-0 the last time they met in December at the East Asia Football Championships in Busan, Korea Republic. In January 2019, China defeated Korea Republic 1-0 in Wuhua in the Four Nations Tournament. 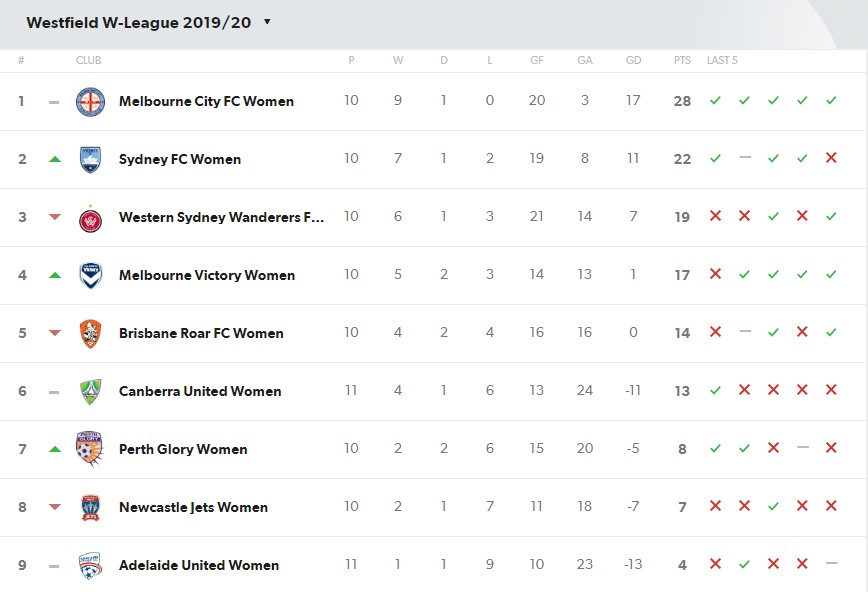