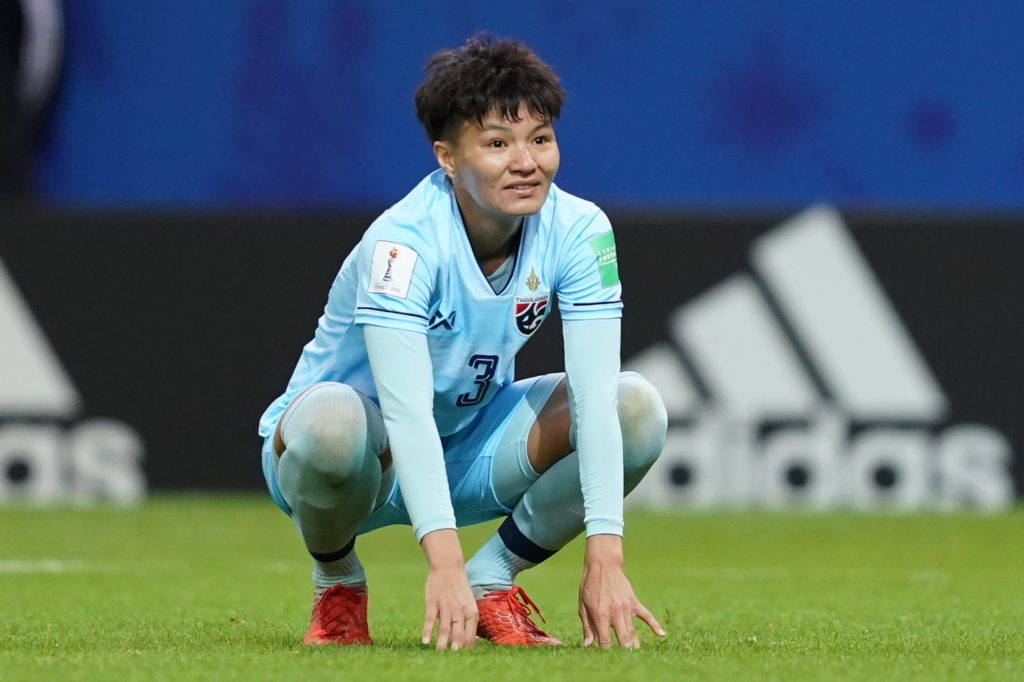 The players, soaked to the bone with rain, scurry off into the warmth of the locker rooms beneath the main grandstand.

The opposite stand — the one without a roof — is largely empty. Water pools in the dips of the pale blue plastic seats exposed to the open air. The few spectators who entered the stadium from the east are pressed up against the back rows, huddling for warmth in their bright rain jackets.

Farther down the stand, just a few rows back from the pitch, a man in a blue and white jersey stands banging a large drum. Rainwater bursts off the taut plastic face with every thud of the mallet. An enormous Thai flag is draped across two-dozen seats behind him, while smaller scarves and banners in yellow, red, and white are hung over nearby chairs.

As the rain sweeps across Campbelltown Stadium in cold, heavy curtains, the man continues to beat his drum and sing for his players, even as they disappear into the tunnel down 4-0.

Thailand’s women’s national team — nicknamed Chaba Kaew after a pink cartoon elephant with a flower behind its ear — has had a tough six months. Their second consecutive Women’s World Cup made history for all the wrong reasons after they experienced the biggest defeat in the tournament’s history (13-0 against the United States) while also conceding the most goals ever in the group stage (20). Their single goal in a 5-1 loss to Sweden was the bright spot in an otherwise disappointing campaign. A second-place finish in the 2019 South East Asian Games in December was little remedy for a team still reeling from a series of defeats, though arguably their most significant losses occurred off the field.

Access the best women’s soccer coverage all year long
Start your FREE, 7-day trial of The Equalizer Extra for industry-leading reporting and insight on the USWNT, NWSL and beyond.
Subscribe
Existing Users Sign In Here
Related TopicsExtraFeaturedThailand

Which USWNT players helped, hurt their causes during qualifying?
The Lowdown: Ali Riley is coming home