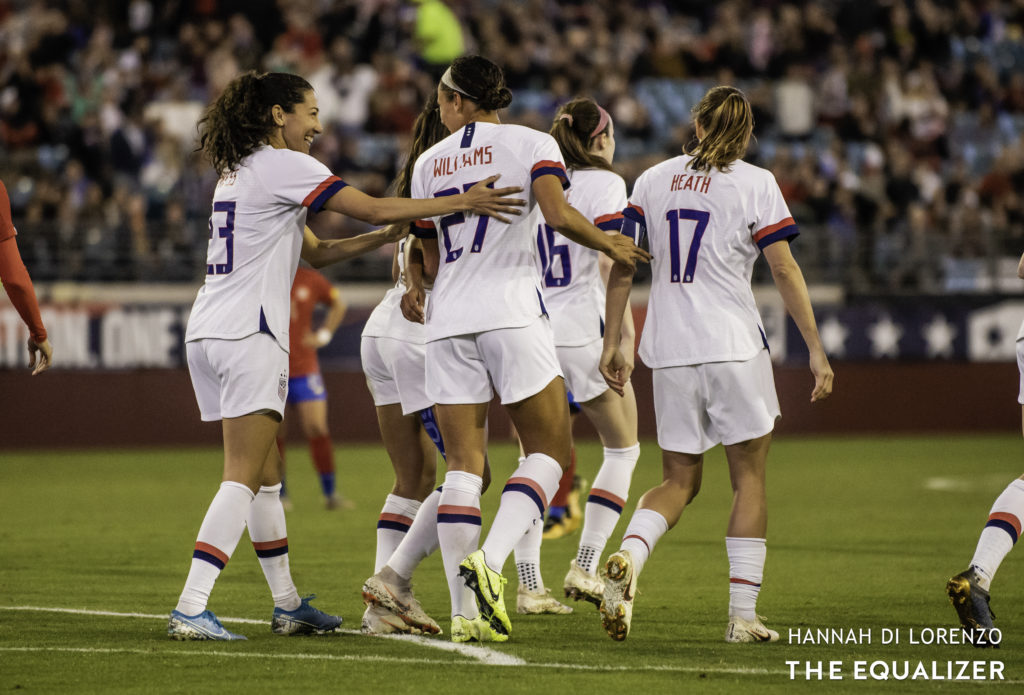 Lynn Williams wasn’t on the World Cup roster for the U.S. women’s national team. Now, with a chance at making the Olympic roster within her reach, Williams is taking hold of every single opportunity. During Sunday night’s Concacaf Olympic Qualifying contest against Canada — who qualified for Tokyo with the United States — Williams made the most of her time on the pitch. She earned a start, featured for the whole 90 minutes and recorded a goal and two assists in a 3-0 win.

BOOM! Lynn Williams goes top shelf with the breakthrough goal to put the @USWNT up 1-0. 🚀 pic.twitter.com/pwGEwcxveE

Williams scored the opening goal for the United States. While the team couldn’t put any goals behind Stephanie Labbé’s net in the first half — despite good looks from Christen Press and Williams — the Courage striker kicked off the second half with a goal in the 60th minute.

Then, Williams took more action on offense and assisted a goal from Lindsey Horan. The play started with Sam Mewis collecting the ball near the touchline before sending it across inside the box. Williams got her head on it first, and then Horan settled the ball before blasting it inside the box with her foot.

Come for the @LindseyHoran tekkers, stay for the Vlatko celebration.

Finally, Megan Rapinoe put the finishing touches on the USWNT’s tournament with the third and final goal. For Rapinoe’s first goal of 2020, Williams found herself crowded on a breakaway and slid the ball to her teammate Rapinoe.

The victory makes it five times that the USWNT has won the Concacaf Olympic Qualifying tournament. Meanwhile, they’re heading to their seventh-straight Olympic games to vie for a fourth gold medal. The USWNT also has the chance to become the first-ever team to win a World Cup and Olympic title back-to-back.

In regard to player awards, hardware was handed to the USWNT and Canada.

It's what they do. 🏆 pic.twitter.com/M4iNucv7Pw