The Lowdown: Lisa Cole is building another program from the ground up 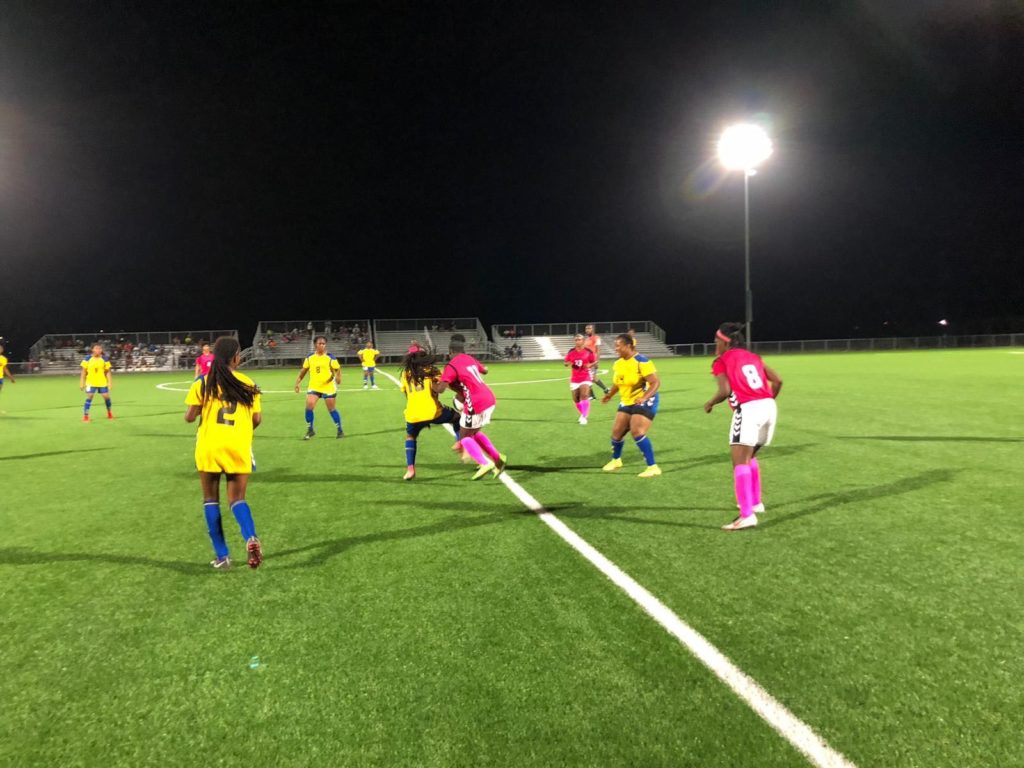 As National Women’s Soccer League fans patiently anxiously await the start of the new season, a far more low-key opening day for women’s soccer happened last week. Antigua and Barbuda is the latest country to have made women’s soccer something of a priority, and a brand-new, seven-team circuit launched on Jan. 31. At the helm of this new venture is former Boston Breakers head coach Lisa Cole.

“In August I came out to help them out with some other youth stuff and to take a general look at women’s football,” Cole, who gained some acclaim for her work with Papua New Guinea’s U-20 side in 2016, told The Equalizer this week. “I came in and helped train for World Cup qualifying with the U-17s and went straight into Olympic qualifying with the senior team. I basically came up with a four-year plan for Antigua women’s football.”

The Antiguan league is not like any familiar soccer league. All of the games are at the same central venue. Each half lasts for 35 minutes. And teams can use as many substitutes as they have available, though the no re-entry rule is in effect. It’s a starting point, and none of these rules should be viewed as minimizing the women’s game.

“Because they’re not fit, this first run of the league we’re only playing 35 minutes per half,” Cole explained. “It was a really good call watching the games the other day. Because at 30 minutes into the half, the level of play just goes [down], because they haven’t been playing. So, rather than force them to go out there and play 45 minutes a half, I just felt like this first run of the league, we need to be aware of player safety. If they all go out in the first two weekends, then what have we done? We haven’t accomplished anything.” 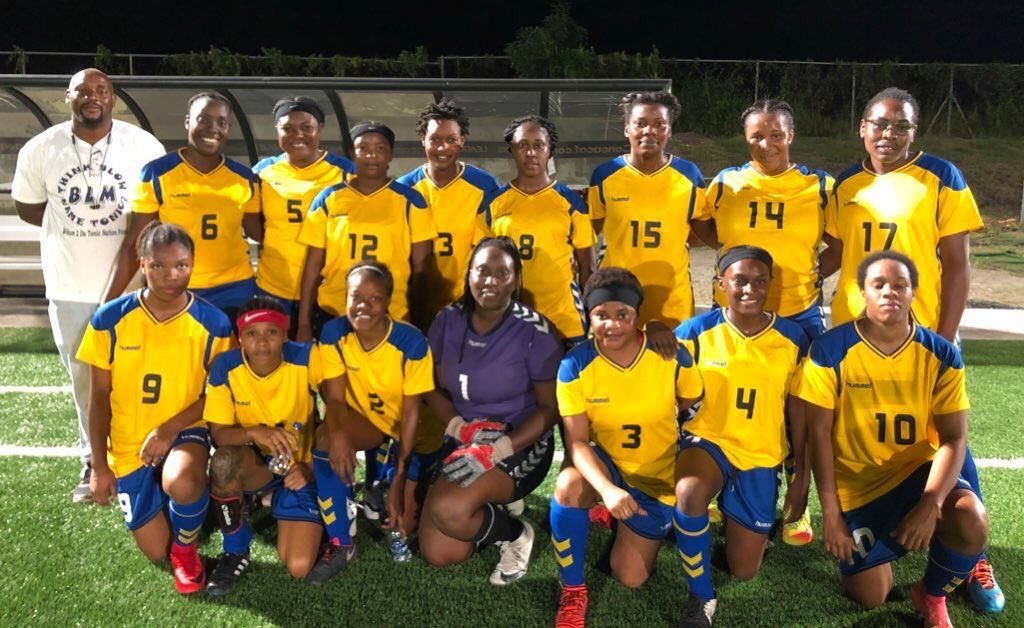 To illustrate just how much ground women’s soccer on Antigua has to make up, the senior Antigua and Barbuda squad that Cole helped at Olympic qualifying finished fourth in their group of six. They lost 10-0 to Saint Kitts and Nevis, who were just outscored 24-0 in their group at the final Concacaf qualifying tournament.

“One of the biggest things for me is, players need to stop where they don’t play for three or four months and then you have an event, bring them into a camp and then you think something is going to happen at that event. That can’t be the case,” Cole said.

“For me, it was really important that we figure out how to get players playing consistently on the island and how to make sure they’re getting competitive matches.”

Cole said there was another league on Antigua but that two of the teams were so much better than everyone else that it became routine for the minnows to stop showing up for matches by the end of the season.

To try and get more parity this time around, Cole had each player list out there top five preferences of which teams to play for, and each team submitted at least a dozen desired players. Cole, who threatened a full draft as an alternative, divvied up the players and said there were only minimal complaints. Based on the opening slate of matches, she did a solid job. She estimates that between 200 and 300 people were in attendance for the opening two matches — a third had to be pushed back a few days due to a shortage of referees — and that they were treated to very competitive contests. The most lopsided of the opening matches was 2-0. 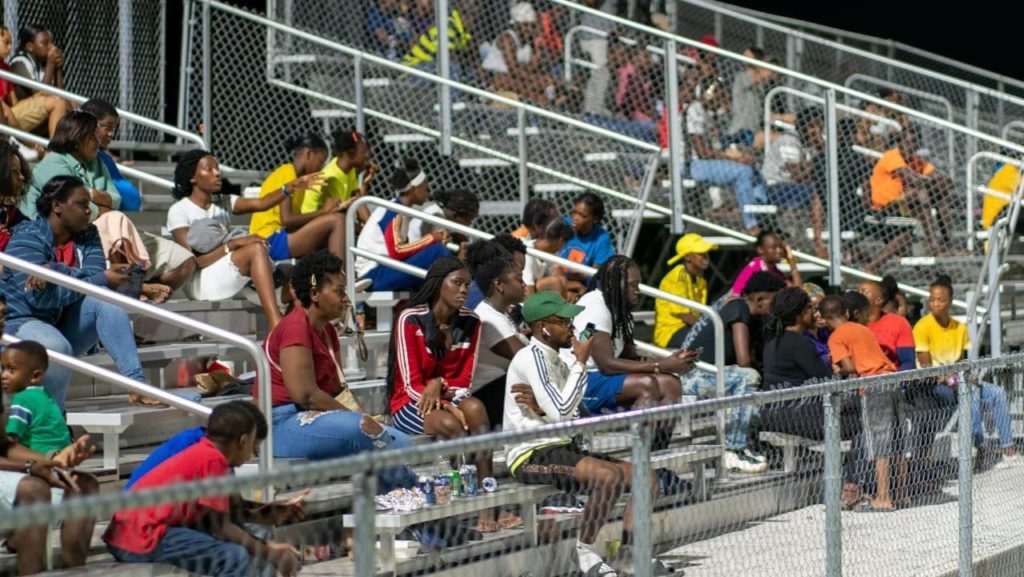 The season won’t be long. There will be a doubleheader on March 20 concluding with the top two teams playing a final to determine the league champion. The other match will be for third place, between the next two teams in the table.

For the time being there are no international players in the league. At least one inquired about playing, but Cole determined that the best thing for now was to limit the playing pool to domestic players. As with the 35-minute halves, it’s a start. And after all, the crux of the plan is to build up the women’s game on Antigua.

Asked what happens after March 20, Cole again cited the four-year plan, plus Saint Kitts and Nevis, whose appearance in the final Olympic qualifying tournament came as a surprise. She also believes there is some potential on the youth sides even though Antigua and Barbuda did not reach Concacaf’s U-20 qualifying tournament that begins later this month. And when the time is right, she said, the federation will begin to scour the United States and other areas for players with Antiguan roots who may be interested in representing the island, a common approach which notably helped Jamaica in its surprise qualification for the 2019 World Cup.

Cole is used to this kind of grassroots role. In late 2015, she packed up her life and moved to Papua New Guinea to coach that country’s U-20 women’s team in its first ever World Cup. Papua New Guinea had qualified automatically as hosts, and needed a direction for not only the team, but women’s soccer at large in the Oceania nation which consists of a group of islands to the north of Queensland, Australia. Cole presented the federation with a longer-term vision.

There were challenges, of course, and she knows there will continue to be. In Antigua and Barbuda, Cole says that women’s athletics “are not encouraged.”

“The thing that has been really surprising for me is that sports is not really valued in Antigua,” she said. “They see it as a lot of investment for what return? I’m trying to educate them on the value of sport regardless of whether you go to a World Cup or Olympics. There is so much more that sports teaches young men and women. Sports should be a part of what they do in schools. They have a school league but it’s still developing.

“People are in love with football here so people, especially boys, take time for it. But for women to be able to take time away from their families and things like that, it’s not valued at all. But I’m trying to teach them that you’re going to be healthier individuals, more well rounded in how you talk to people and how you develop teamwork and problem solve and things like that.”

— The Houston Dash and Reign FC finally completed a significant trade during the week but threw a curve ball into it. The Dash picked up Megan Oyster and Shea Groom, plus a conditional second-round pick in 2022. in exchange for Amber Brooks and Sofia Huerta. It is the sort of deal that both teams will think they can win because of the potential upside involved with the players, particularly Huerta and Oyster. Check out our Transaction Tracker for more.

— The curve ball in the trade is that it was originally supposed to include Allie Long but the World Cup champion balked at the idea of going to Houston.

— Not mentioned in the Tracker analysis is that the Dash bringing in a future draft pick could be important as a dearth of high picks has been one of the main reasons the club has not been able to build a playoff-worthy roster yet.

— In Utah, Mandy Laddish retired and the Royals waived Becca Moros. There have been more players out than in to the Royals this offseason and their immediate direction remains a bit of a mystery.

— Congratulations to Christine Sinclair on breaking Abby Wambach’s all-time international scoring record. Sinclair has been a fixture in the U.S. since she played for the University of Portland and then in the professional ranks with FC Gold Pride and the Western New York Flash in WPS. And of course since 2013 with the Thorns. My favorite thing about her is that she never changes. Her game has evolved but never changed in the sense that she has always been a smart, solid player willing to do whatever it takes to win (as opposed to just paying it lip service). Amazingly, she played every available minute for the Portland Thorns from the time Canada returned from the 2016 Olympics until she got called away to join the national team ahead of the 2019 World Cup. Truly a North American sports treasure.

No league play over the weekend but here is the latest on qualifying for the Olympics by confederation.

Concacaf: The United States will play Mexico on Friday in the back end of a doubleheader that starts with Canada facing Costa Rica. The winners of those matches will be the two Concacaf representatives in Tokyo.

CONMEBOL: Brazil qualified via the 2018 Copa America. Runners-up Chile earned the right to contest an intercontinental playoff against either Cameroon or Zambia.

Oceania: New Zealand qualified out of the 2018 OFC Nations Cup that also booked their place at the World Cup.

AFC: Eight teams are currently competing in groups of four in an event that had to be hastily moved from Wuhan to Sydney due to the coronavirus. The top two finishers in each group will play two-leg playoffs in March with the winners of those joining host Japan in the Olympics. North Korea withdrew from the qualifying event.

CAF: Cameroon and Zambia will play a two-leg playoff March 2 and 11. The winner goes to the Olympics while the loser will face Chile in another two-leg playoff for the final spot.

Concacaf Olympic qualifying, Day 6: Canada tops Group B
Qualifying in the Americas doesn’t have to be a self-fulfilling prophecy