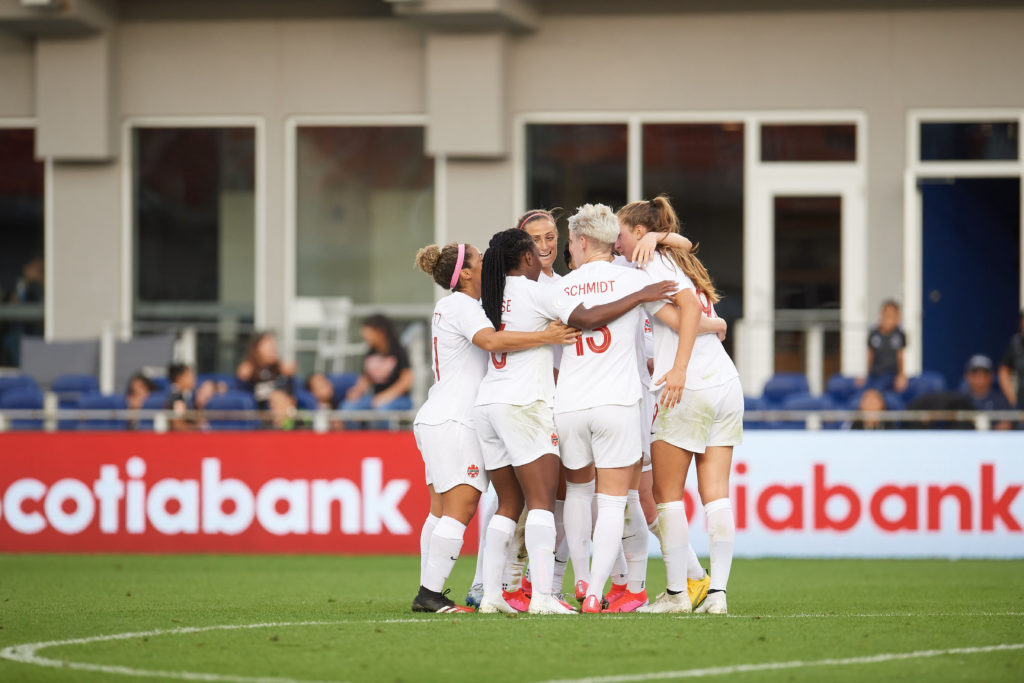 Christine Sinclair broke the international scoring record at the beginning of the Concacaf Olympic Qualifiers tournament. However, Sinclair isn’t just settling with the 185 goals. Instead, Sinclair is going for more, and added on to her record Tuesday night against Mexico, scoring the first of Canada’s two goals in a 2-0 victory.

With the win, the Canadians have topped Group B. They will compete against Costa Rica for a spot in Tokyo, as whomever wins the semifinal matches will punch their ticket to the Olympics. Meanwhile, Mexico will take on the defending World Cup champions, facing the United States, who topped Group A.

Sinclair’s goal came in the 26th minute, after Mexico stood strong on defense to start the first half. However, it was Shelina Zadorsky that scored a momentum-crushing goal against Mexico, right before the halftime whistle blew. Kadeisha Buchanan ended up with the ball inside the box and slipped it over to Zadorsky, who took the shot at angle.

In the second half, Emily Alvarado picked up a big save against a strike from Janine Beckie to keep the Mexicans only down by two. Mexico’s best chance came from Daniela Espinosa toward the end of the second half. However, Canadian goalkeeper Stephanie Labbé was able to save it and prevent Mexico from cutting the lead.

Goal @CanadaSoccerEN 🇨🇦 right before Half-Time! @Shelina4 puts it in the back of the net! | #CWOQ #WeBelong pic.twitter.com/jGR97SfqBd

The semifinals will take place on Friday evening.

Despite not making it to the semifinals, the Jamaican women’s national team and St. Kitts and Nevis were still hunting for their first Olympic Qualifying goal. It was Jamaica that found the scoresheet first and defeated St. Kitts and Nevis, a first-time participant in the tournament, 7-0.

Khadija “Bunny” Shaw found the opening goal in the 38th minute, getting the ball behind backup goalkeeper Quinn Josiah, who made her first international appearance. Two minutes later, Jamaica extended their lead with Tiffany Cameron scoring her fourth international goal.

Opening up the second half, Phoenetia Browne had a few chances to cut the score in half. However, Sydney Schneider made a full-stretch save to deny St. Kitts and Nevis of their first Olympic Qualifying goal. Jamaica answered back with an attack, too. Havana Solaun scored on a free kick right outside of the box, but on the side of the box. After hitting of the post, Solaun’s shot went in. Solaun was the player that scored Jamaica’s first-ever FIFA World Cup goal in France.

Meanwhile, Shaw found her second goal of the night in the 58th minute. In the 62nd minute, St. Kitts and Nevis had their best chance to respond, with Christi-Anne Mills entering the match and sending in a picture-perfect cross inside the box to Phoenetia Browne, who lost her footing.

Mills ended up giving up a penalty to the Jamaicans, after fouling Trudi Carter inside the box. Carter stepped up and took the penalty kick, sending it past Josiah for the fifth goal of the evening of Jamaica. Moments after the penalty, Kayla McCoy scored her first international goal for the Reggae Girlz. McCoy also scored the final goal of the evening, securing a brace along with Shaw.

Lauletta: On Christen Press and the impending pressure
The Lowdown: Lisa Cole is building another program from the ground up