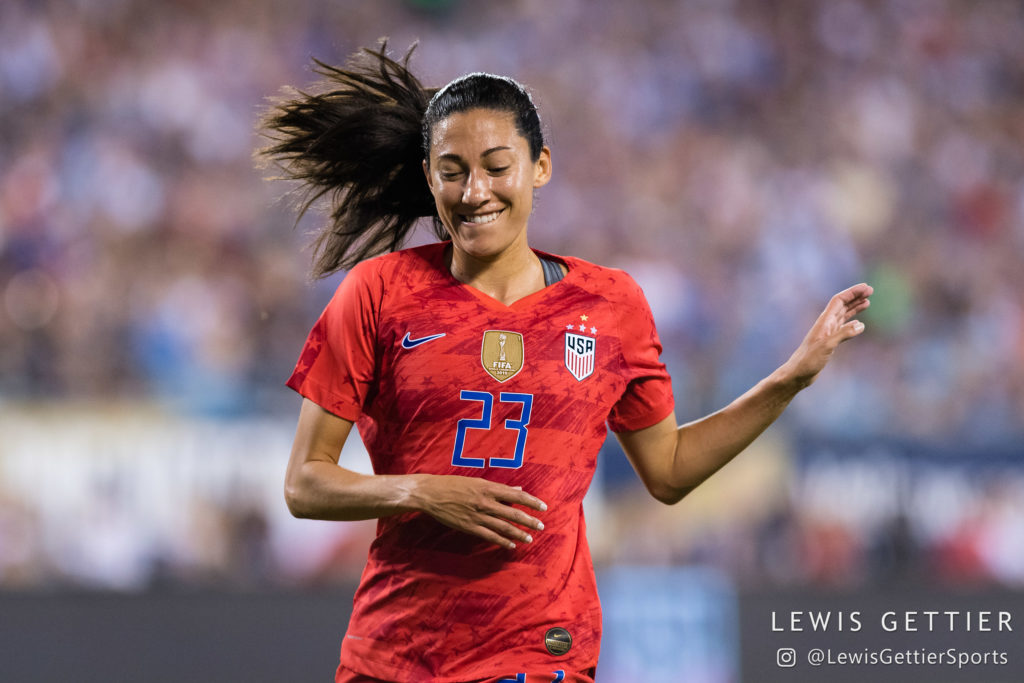 A goal differential of +18 goals is what the U.S. women’s national team finished Group A with on Monday night. That, and they secured all nine points after victories against Haiti, Panama and now Costa Rica. In their final match, the USWNT took on Las Ticas, scoring six goals and keeping the Costa Ricans away from net.

There were lineup changes for both sides. Notably for Costa Rica, goalkeeper Noelia Bermúdez took to the bench in favor of backup Priscilla Tapia. Meanwhile, for the United States, Ali Krieger reprised her role as a centerback alongside Abby Dahlkemper. Christen Press took full advantage of another start in Olympic Qualifiers by notching a brace, scoring goals in the 4th and 36th minutes.

Sam Mewis also recorded a brace, but with a bit of controversy. With no VAR in the tournament, calls made by the referee are not subject to review. Mewis’ first goal occurred in the 63rd minute, and her second goal came in the 82nd minute. The second goal, as the replay show, touched the goal line, but the ball did not completely go over the line. Either way, the goal counted for the USWNT’s sixth and final goal of the evening.

Goal or no goal?
There's no VAR, so the ruling of goal on the pitch is going to stand either way for the #USWNT, to make it six. 🇺🇸#USAvCRC | 6-0 pic.twitter.com/LTC7FoXpzu

Other goal scorers were Lindsey Horan — who had a hat-trick against Panama — and Jess McDonald.

Now, the United States will wait and see who their semifinal opponent will be: either Mexico or Canada. The United States will face Mexico if the Canadians draw or defeat Mexico tomorrow. However, if Mexico pulls off the victory, Canada will take on the USWNT. Meanwhile, Costa Rica will face the Group B winner — aka, the winner of the Canada vs. Mexico match.

Costa Rica could be without their backup captain, though. Katherine Alvarado was stretchered off the pitch in the second half. After playing with 10 players for a moment, Costa Rica subbed out Alvarado and put in Mariana Benavides. There is no update on her injury as of yet.

The semifinals will take place in Carson, California, on Friday.

"All we think about is Tokyo"

Haiti walked away from the tournament on a high note on Monday with a 6-0 victory over Panama in Houston. Both teams had already been eliminated from contention heading into the match.

Haiti captain Nerilia Mondesir and Mikerline Saint Felix each scored a brace to lead the way for Haiti. Batcheba Louis and Melchie Dumornay scored a goal each to complete the rout. Haiti scored three goals in each half.

Panama, which finished fourth in 2019 World Cup qualifying and narrowly missed out on the World Cup after losing a two-leg playoff to Argentina, leaves the Olympic qualifying tournament with three losses, 20 goals against and just one goal scored.

The Equalizer Podcast, Episode 94: We’ve All Been Concacaf’d
Lauletta: On Christen Press and the impending pressure