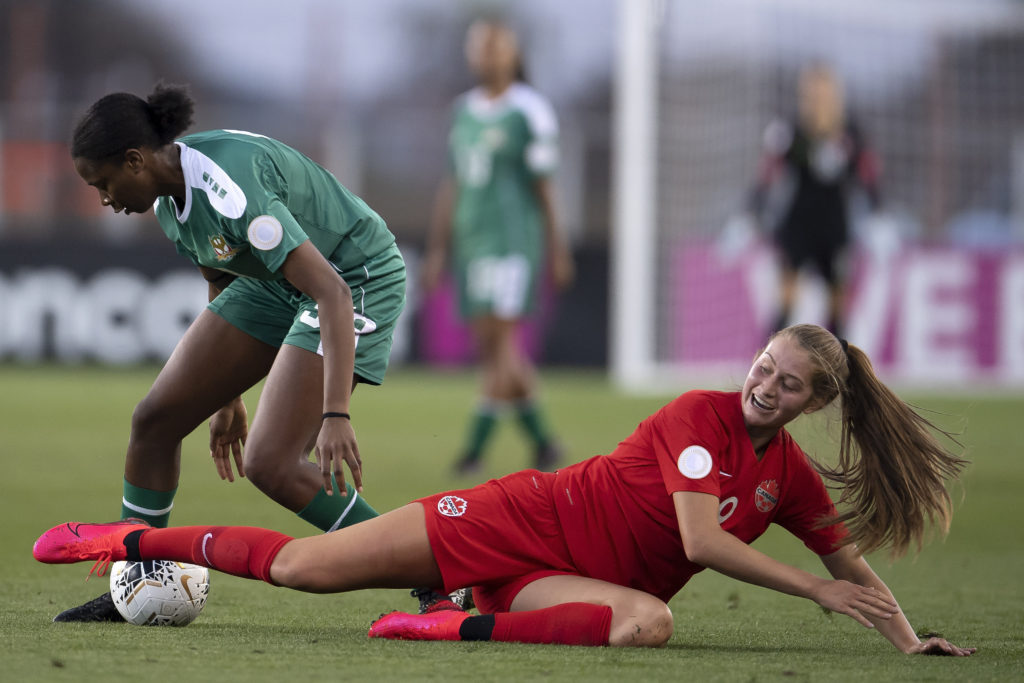 However, after surprising many with their World Cup berth last year, Jamaica will not be making an upset for the Olympics. On Saturday night, the nation’s Olympic dreams were held on by a thread. After losing to Mexico in their opening qualifying match, the Jamaicans gave up seven goals to Canada.

Jordyn Huitema and Janine Beckie recorded hat-tricks in the victory. They join Adriana Leon as Canadians to reach three goals in a match during the tournament. Leon had four goals against St. Kitts and Nevis on Wednesday night. However, Huitema took it a notch forward, scoring her fifth goal of the match in the 90th minute.

Also scoring for the Canadians was Deanne Rose in the first half.

Canada secured three points in both of their matches. Now, they have punched their ticket to the semifinals in California. They are joined by Mexico, and, in Group A, the United States and Costa Rica, as the four semifinalists. However, the Canadians might be without Ashley Lawrence for their final group match and possibly the semifinals. While there is no time-table on her return, Lawrence had to be helped off the pitch by two trainers in the second half. Leon came on to replace her.

Canada will finish their group play on Tuesday against Mexico, as they will battle for the top spot in the group at 6:30 p.m. EST. Meanwhile, Jamaica and St. Kitts and Nevis will compete for their first win of the tournament at 8:30 p.m. EST.

Renae Cuéllar scored two goals against St. Kitts and Nevis to help propel the Mexicans to the semifinals of Olympic qualifying. Mexico took on the first-time tournament participant earlier on Saturday, scoring six goals. Kiana Palacios scored the first goal of the match early, in the 2nd minute, to give the Mexicans early momentum.

Renae Cuéllar has a brace! Will we see a hat-trick from the Tijuana forward? #SKNvMEX | 0-5 pic.twitter.com/HlCEXQ78hy

Jimena López helped boost that momentum with a goal only two minutes later. Mexico ended up finishing the first half with four goals, as Stephany Mayor scored on a penalty kick and Cuéllar recorded her first of two goals. Cuéllar, a forward for Tijuana, opened up the second-half scoring for Mexico.

Liliana Mercado scored Mexico’s final goal in the 71st minute. Meanwhile, in goal, Itzel González made her second appearance for Mexico and recorded a clean sheet.

Stephany Mayor makes it three for the Mexicans within the span of 10 minutes! #MEXvSKN | 3-0 pic.twitter.com/GzSHS2T034

St. Kitts and Nevis has another chance under manager Jené Baclawski to record their first Olympic qualifying win. They’ll meet head-to-head with Jamaica on Tuesday, who fell to Canada.