Christine Sinclair deserves even more recognition than she’ll get 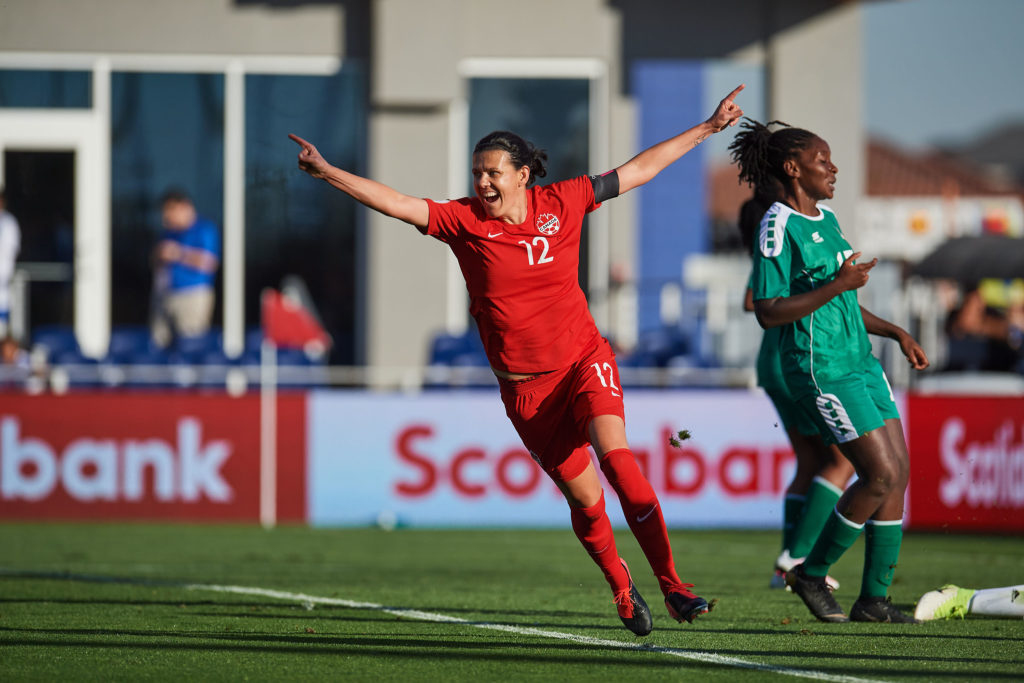 Everything about Wednesday was entirely predictable.

Christine Sinclair was one goal from tying Abby Wambach’s international scoring record and Canada was playing a team severely overmatched and ranked No. 127 in the world. Sinclair scored twice to move into sole possession of the record with 185 goals, and Canada won 11-0.

Everyone knew this moment was coming; most figured it would have happened last year. So, like many colleagues, I’ve had thoughts fleshed out and stories pre-written in preparation of this moment. Those would try to uniquely portray what has been said the world over about Sinclair — that she’s genuinely among the humblest star athletes in the world. And they would try to strike the right balance of celebrating this moment — this athlete, this person, this career — while calling to light how much more attention and support she deserves.

I’d written about how Canada Soccer’s lack of programming through the years for its senior women’s national team is chief among the reasons Sinclair didn’t break this record two years ago; how the federation has scheduled a mere nine home games for its women’s national team since hosting the 2015 World Cup. There was no bottle for that lightning.

Imagine the scene if Sinclair had the opportunity to break this record on home soil. The federation couldn’t guarantee that it would happen at home, but Canada Soccer never offered the opportunity, anyway. Canada’s women’s national team played exactly one home game last year — none since the World Cup, with the next one on the schedule coming in April, 11 months after the previous. This is a top-10 team in the world.

I’d written about how Sinclair has been mostly overlooked in the debate around the greatest player in history. No moment was more indicative of that than the 2012 Olympic semifinal at Old Trafford, when a possessed Sinclair scored a hat trick and carried Canada — as she always does — only to lose, 4-3 to the U.S. in extra time. The lack of global attention doesn’t bother her, but it remains a slight all the same.

Still, I struggled to run through the motions of publishing those pre-written words on Wednesday night as I watched one of the game’s greatest players achieve one of the sport’s greatest individual milestones in front of what could generously be called a few hundred people in a small city in Texas. Canadian media treated the moment with the appropriate level of attention, but in the U.S. and elsewhere, it just sort of happened.

A select few saw it in the stadium, and a few thousand more saw it on a TV channel that isn’t as widely distributed as many of its competitors, a problem created by Concacaf not selling the rights to the tournament until a day before it kicked off. It felt a little bit like the days of trying to figure out how to watch the Algarve Cup — the days before we had access to 3,000 soccer games per year on U.S. TV. Even in Canada, if you don’t have Rogers for cable, you had to watch the game on a boutique subscription streaming service.

In truth, I’ve struggled with what this column should say, even though I, too, knew this moment was coming. I don’t want to detract from Sinclair’s incredible accomplishment. I could write again about how incredible a player Sinclair is — a player who has evolved her game from something of a pure striker to a cerebral playmaker who can score on top of that — for club and country. She’s into her third decade atop the game.

I could write again about how she embodies everything a coach or teammate could want in a selfless leader. She used her moments at the microphone after Wednesday’s match as an opportunity to reiterate that she’s a proud Canadian and that she hopes that she helped inspire others. She expressed relief that she and her teammates could now focus on the qualification task at hand.

We’ve written all of that, both in this moment and through the years as the only site on this continent to have covered women’s soccer exclusively and continuously for the past decade. So, I’ll direct you to other stories we have written about Christine Sinclair, and concede that even we could be doing more there.

"For me it has nothing to do with the record, it's to have young girls be able to dream of playing professionally or represent their country, win Olympic medals…" @Sincy12 #Sincy185 "To now inspire young girls to pursue their crazy, wild dreams… it's pretty cool." pic.twitter.com/RkVM1KxdFf

The main feelings that have settled in, after the joy of the moment, revolve around the need to be better — everyone, from the men in my Twitter mentions taking issue with the literal fact that Sinclair has scored more international goals than any man or woman, to my colleagues in media across the country and the world who should also be giving this moment more attention than a passing retweet.

I was at Red Bull Arena in 2013 when Abby Wambach broke Mia Hamm’s previous record. Wambach did it in front of a full stadium which included a gaggle of media and on a more widely distributed channel, all under the spotlight of the Big Apple just a few miles away. Wambach gave them their story and their highlight reel, scoring four goals in the first half.

No two moments are the same. There’s no doubt that this tragic week involving the death of NBA legend Kobe Bryant, on the heels of one of the biggest annual days in sports — the Super Bowl — has taken a lot of rightful attention of the sports world.

Wambach, no doubt, got significantly more attention throughout her career as the face of the world’s most iconic women’s team — something Sinclair hasn’t always been afforded with the relative lack of depth around her through the years. Wambach embraced that spotlight and leveraged it to bring more attention to issues in her sport in a way that Sinclair prefers not to, which inherently put Wambach in the crosshairs of turf lawsuits and other battles for the sport at large. Neither of those approaches is wrong.

What does feel wrong is how Sinclair’s moment has come and gone, and how it feels like it really only took place in the echo chamber of social media. Why is that the case when we knew with great certainty, since November, that this tournament — and likely this game — would be when Sinclair would break this incredible record? Why weren’t these U.S. TV rights sorted out months in advance, so they weren’t relegated to secondary channels? Why weren’t these games better marketed in their cities? All respect to Edinburg: Why weren’t they in bigger, proven soccer markets? Plenty of complicated answers will be offered, but simply put, this was an opportunity lost to pay back a deserved moment to a player who has given the sport so many. In the present moment, that’s an organizational Concacaf issue; in the wider sphere, that’s back to Canada Soccer’s lack of scheduling, among other things.

Like other great players, Sinclair might not receive the recognition she truly deserves until after she retires. That’s a particularly poignant reality in the still relatively nascent world of women’s soccer, in which legends of yesteryear are mostly unknown to new fans.

Sinclair is happy to put this record-breaking narrative behind her as she prepares for more important games. She’ll sleep just fine without getting more TV airtime or fielding more phone calls for interviews. That doesn’t mean there shouldn’t have been more attention paid to what she did on Wednesday — and what she has done over the past 20 years.

Game recognize game: Teammates, stars congratulate Christine Sinclair
The promise of thrill on the field has turned to chaos off it for Asia’s Olympic qualifying