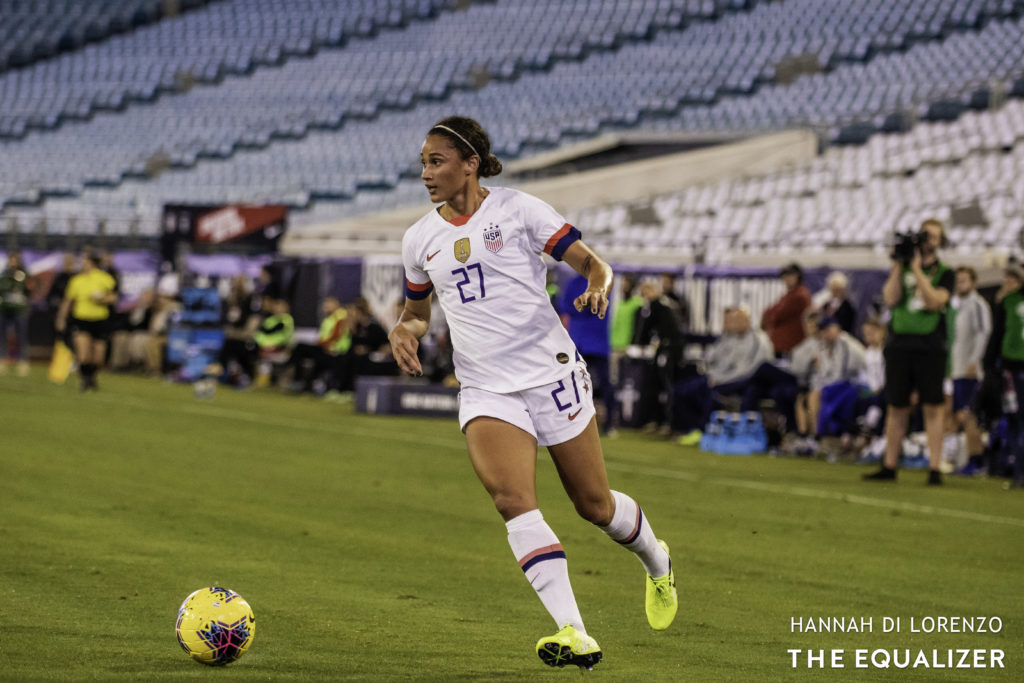 Three points didn’t come with ease for the reigning World Cup champions. The United States opened up their Olympic qualifying campaign with a bruising battle against Haiti, despite winning the match 4-0. In the pouring rain in Houston, the USWNT picked up three points and four goals in Vlatko Andonovski’s first-ever competitive match in charge.

Christen Press opened the scoring in the 2nd minute with a tap-in at the back post after Lynn Williams — who had lost her left boot while dribbling — delivered a right-footed cross from the wing.

Roseline Eloissant appeared to score the equalizer for Haiti in the 18th minute, but the goal was disallowed for an apparent offside call. Eloissant could not have been offside, since she was the first player to touch the ball off of Ruthny Mathurin’s corner kick.

🤔🤔🤔 #USWNT gets a bailout. pic.twitter.com/Mh5PKfZfcQ

In the second half, the United States found the back of the net three times. An opening chance from Press was denied by Haitian goalkeeper Kerly Theus, but then the United States found their footing. Substituting in Megan Rapinoe for Press made a big difference, as Rapinoe has shown her strength on set pieces, specifically taking corner kicks. Moments after entering the match, Rapinoe assisted a goal from Lynn Williams, who snuck her header past the Haitian defense.

Lindsey Horan also found the back of Theus’ net on a corner kick, also using her head. Carli Lloyd put away the match’s final goal in stoppage time with a header, off an assist from Julie Ertz.

The United States picked up three points, but trail behind the Costa Ricans, who had six goals in the evening’s earlier match. Up next for the reigning World Cup champions is a contest against Panama on Friday.

Costa Rica cruised to an opening-night victory over Panama behind braces from Melissa Herrera and Priscila Chinchilla. Raquel Rodriguez and Shirley Cruz also added a goal apiece for Las Ticas.

Cruz’s volley directly off a corner kick was is an early contender for goal of the tournament, and it also opened up the floodgates for Costa Rica in what was a tight scoreline at the half.

Shirley Cruz got Costa Rica's @Concacaf Olympic qualifying run off to a flying start with an absolute worldie! 🇨🇷 pic.twitter.com/7HWbhWE9XF

Katherine Castillo scored the lone goal for Panama, in the 45th minute. That briefly cut Costa Rica’s lead to 2-1.