Christine Sinclair has her mark in sight 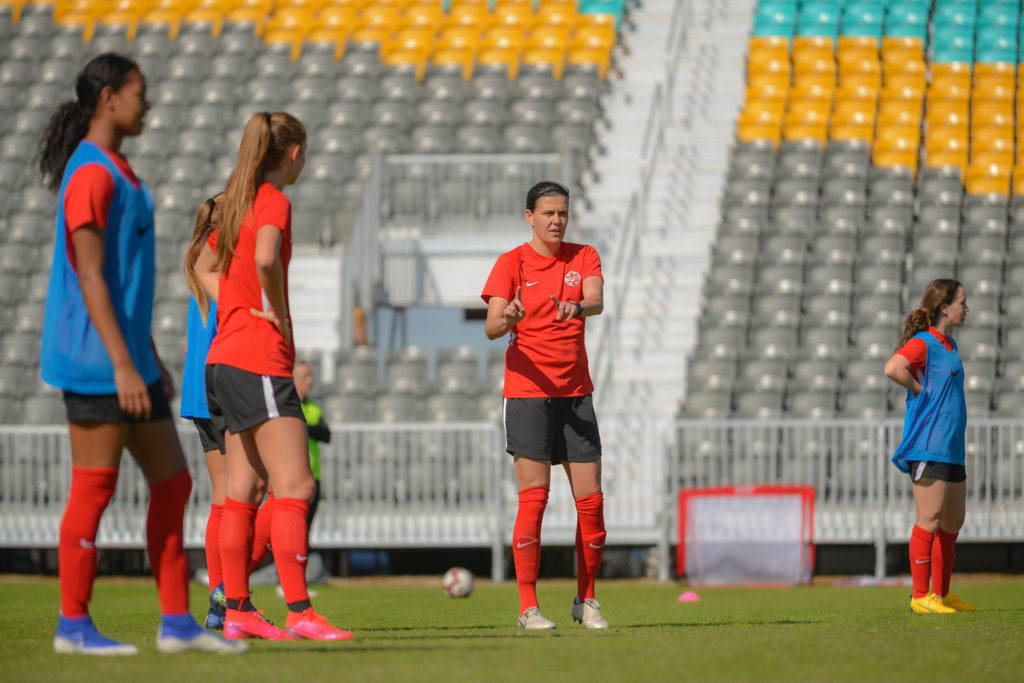 The 36-year-old Sinclair could leap past the U.S. Soccer Hall of Fame striker as soon as Wednesday night, when Canada begin their 2020 Concacaf Olympic qualifying campaign against St. Kitts and Nevis in Group B in Edinburg, Texas.

The No. 8-ranked Canadian squad has never faced St. Kitts and Nevis, who come in ranked 127th. Canada will also play Jamaica and Mexico in Texas. The semifinal and final of the Olympic qualifying tournament will take place in Los Angeles Feb. 7 – 9, with only the top two (the two teams to make the final) advancing to this summer’s Olympics in Tokyo.

Sinclair first made her senior team debut on March 12, 2000, at the Algarve Cup against China. Fast forward 23 later and she still leads the line for Canada. She scored her first goal two days after her debut, on March 14 in a 2-1 loss to Norway.

In the two decades that Sinclair has worn the red and white, she has played with brilliance, leadership and class that very few professional athletes can match. She is the most prolific footballer Canada has ever produced. While Canadians know how much Sinclair means to her country, she doesn’t get enough accolades and high praise outside of Canada.

Bigger names like Marta, Alex Morgan, Lucy Bronze and Hope Solo got the headlines through the years. Sinclair’s consistency and pure goal-scoring ability does not get the attention it should.

“I don’t know how much recognition she does receive on a global level,” Canada coach Kenneth Heiner-Moller told reporters ahead of the tournament. “When I speak to my colleagues primarily in Europe, they always ask about her. They know about her. Maybe not the media; maybe they don’t recognize her as much as coaches do. I think the biggest recognition she can get is from the coaches when we play them.”

Staying out of the spotlight suits Sinclair just fine. She would much prefer to quietly go about her business and help Canada win. Leading up to the 2019 World Cup, Sinclair was frequently pestered by reporters about possibly breaking Wambach’s record in France.

While quickly acknowledging the questions, Sinclair would shift towards her teammates and what Canada as a whole needed to do to win at the World Cup. Sinclair is the ultimate team-first player. She wants what’s best for the growth of Canada Soccer.

There's only one Christine Sinclair and you know it. #ChasingHistory 🍁 #CANWNT pic.twitter.com/BnStl11klo

There’s only one road to Tokyo #WeBelong

Sinclair is a goal-poacher that only needs one chance to score. She’s in the box and before you know it, she’s got the ball, whether it’s a header off a cross, a curling free kick, or a penalty.

“That’s a part of why she is so important for us,” Heiner-Moller said. “She’s not too flashy. You don’t really notice her too much, until she puts it in the back of the net. If you go to some of our sessions, you can see how hard she is working to be that unnoticeable player that puts a shift in and all of a sudden she turns up in the penalty area. I think a big part of her success and our success is… if you count her assists, her second assists, you’ll find out she is a major key to the Canada women’s national team and their success.”

Sinclair is often the first person on the pitch encouraging and supporting her teammates. At a time where several of Canada’s next generation of players have grown up idolizing and looking up to Sinclair, she’s now sharing the pitch and putting the likes of Nichelle Prince, Jordyn Huitema, Deanne Rose and Janine Beckie in the best position for them to succeed going forward.

John Herdman was on the sidelines coaching Sinclair for six years. He knows firsthand the emotion and feeling Sinclair brings when she represents her country. When she does break the record it will be a monumental moment for all of Canada.

“I just think it would be cool for a Canadian to be on the top of that list,” John Herdman recently explained to The Equalizer. “Abby is obviously a world-class player that was on a worl- class team for years. It’s just an honor to be amongst those players. It’s pretty crazy.”

Christine Sinclair has carried Canada Soccer into a third decade. As she looks to climb into the record books, her main focus won’t be on scoring goals. In true fashion, she will put the team first, and do everything she can to make sure Canada qualifies for Tokyo 2020, where the team will look to follow up two straight bronze-medal showings.