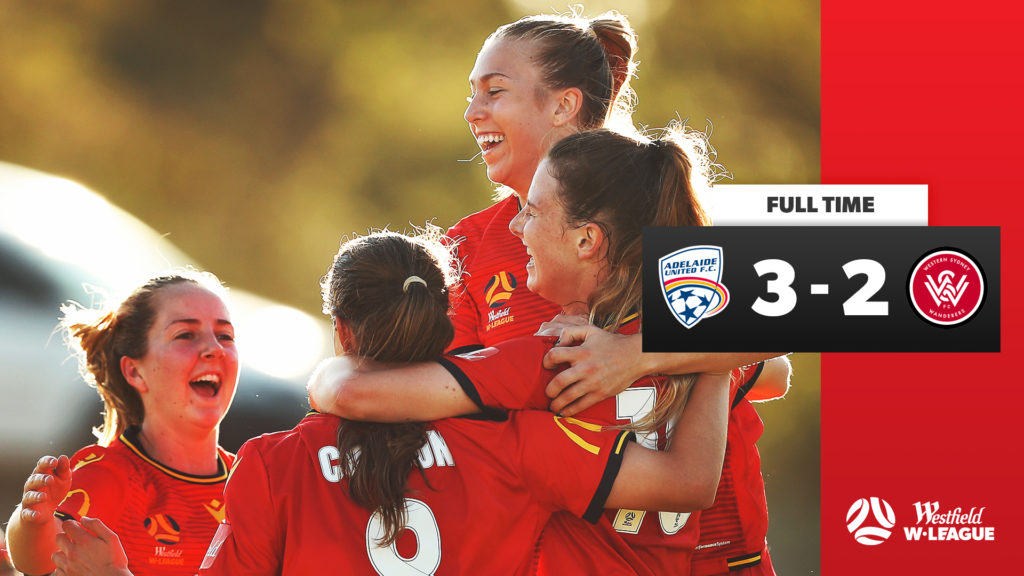 Here’s what happened during Week 11 of the Westfield W-League season:

American import Mallory Weber (Utah Royals) scored twice in the first half to help stake Adelaide United to a resounding 3-0 lead over the Western Sydney Wanderers on January 25 in front of only 569 fans in Adelaide. Within six minutes at the end of the half, Weber scored from a tap in and then from a long run out of midfield to chase a ball over the top which she buried into the net from a sharp angle on the left side. Many have been saying that Adelaide’s last place position didn’t reflect how competitive they have been this season and this game certainly showed that, while leaving Melbourne City with a commanding six point advantage in the table over the Wanderers in the race to the Premiership (Regular Season) title. The Wanderers scored two goals from the 88th minute on, by Sam Stabb (Washington Spirit) and Brazilian youth international Lais Dos Santos Araujo, who played at the University of Florida and joined the Reds from Arna-Bjornar of Norway. Kristen Hamilton (North Carolina Courage) skied a penalty kick well over the crossbar in the 80th minute that ended up being decisive in the Wanderers leaving South Australia with no points. Adelaide is now joint bottom with Newcastle Jets, with each side having one win and one tie.

Honorable mention goes to Melbourne Victory forward Melina Ayers, who scored two first half goals of her own as Melbourne Victory won its fourth game in a row with a 3-0 win at home over sinking Canberra United on January 26. Canberra lost their fourth straight match—all by shutout—and have given up 15 goals in those contests and a league-high 23 goals all season. Ayers (20) played this past summer with the Seattle Sounders of the WPSL, who made it to the league semifinals. Ayers, an Australian youth international, now has 2 goals on the season and 7 in her 5 W-League seasons, two of which were spent with Melbourne City. Natasha Dowie scored a late clincher for the Victory for her sixth goal of the season, one behind Sydney FC’s Remy Siemsen for the league lead.

Nineteen-year-old Australian youth international forward Tessa Tamplin scored arguably the goal of the season in Newcastle Jet’s 4-2 home loss to the Perth Glory on January 23. Tamplin, in her second season with the Jets, scored her second career W-League goal and first of the 2019/20 season in the 75th minute with a stunning curler into the top corner of the net from along the right touchline, a good 40 yards from goal, to pull her side to within 2 goals of the Glory. Tamplin appeared to be sending a cross into the box and was disappointed with her effort and looked away in disgust, but the ball sneaked into the net above Morgan Aquino in the Perth goal. Tamplin told Fox Sports after the game that during the play, “I saw everyone in the box, and I was like, ‘Oh, great opportunity, perfect cross and then I hit it and I was like f@#$ oh sorry, damn I shanked it.’ I turned around and didn’t even want to watch and [thought] ‘oh what a rookie’ and I heard the crowd go off and turned around and it was in the back of the net, ‘Oh sorry, what? I didn’t even see it.’ I have to go back and watch the replay…It was a bit of a funny one, I was laughing at myself a bit.” It is an amazing goal and a highlight of the game for the Jets.

Doesn't matter if you meant it or not when it's a banger from some 40 yards out 🤭 What a goal from Tessa Tamplin! #NEWvPER #WLeague #MadeOfNewcastle pic.twitter.com/96roY3wVrJ

Veteran goalkeeper and a Matilda in 2015 and 2016 with 3 international appearances, Casey Dumont backstopped a solid Melbourne Victory defense in their 3-0 win over Canberra United on January 26. Dumont stood up on an attempt when Aoife Colville was alone in the box from 4 yards away in the 58th minute and kicked the goal attempt away. She finished with 4 saves. Dumont has been outstanding all season and has a 1.00 Goals Against Average for the season (9 goals allowed in 9 games) with 3 shutouts.

Reign FC loanee Morgan Andrews was hugely influential in Perth Glory’s 4-2 win at Newcastle Jets on January 23, her club’s first of the season. She scored her second goal of the season from the penalty spot just before halftime to give her side a 2-0 lead and rocketed another ball onto the crossbar in the 65th minute that Caitlin Douglas easily turned into the Perth goal for her club-leading third goal of the season. Andrews, the ex-USC star midfielder, led her side with 84 touches and 4 interceptions in 90 minutes, 70% passing effectiveness on 56 attempts and won an outstanding 10 of 11 challenges with an opponent for the ball.

Perth won its first game of the season in 9 games by defeating the Jets and leapfrogged their opponents for seventh place in the league table.

A Break in League Play

There is one make-up game from Round 9 that will be played on Saturday, February 1 between Newcastle Jets (home side) and Adelaide United, which was postponed because of the air quality in Newcastle due to the bush fires in the state. Other than that one game, league play is off until February 13th for the FIFA international window and the Matildas will play in the third round of AFC Olympic Qualifying for this summer’s Tokyo Olympic Games. The Matildas will face Chinese Taipei on February 3, Thailand on February 6, and China on February 9. The venue had been switched from Wuhan to Nanjing in China last week because Wuhan was ground zero in the Coronavirus Virus spread, but on January 26th, China withdrew as host altogether and Sydney was named as stand-in host for the four team group, from which two will advance to the final round of qualifying in March.

In a move that has had massive speculation about over the past few weeks, Caitlin Foord has announced that she has signed for Arsenal of the English Women’s Super League. She will leave the Sky Blues immediately for Arsenal after the Asian Olympic Games Qualifying starting next week. She has scored 33 goals in 104 Westfield W-League appearances across ten seasons during two stints with Sydney FC and a two-year spell at Perth Glory. She had 2 goals in 9 games this season. Foord won two league crowns at Sydney (in 2012/13 and last season). Foord’s NWSL rights had recently been traded from the Portland Thorns to the Orlando Pride. She joined fellow Thorn and Matilda Hayley Raso in moving to the English league as Raso recently joined Everton in England. In the NWSL, Foord played 3 seasons with Sky Blue FC (2013-2015) and the past two seasons with Portland in the NWSL, where she won a league title in 2017. She had 3 goals and 5 assists in 70 league matches in the NWSL. She also played a year in Japan with Vegalta Sendai in 2017. Foord has 77 caps for the full Australian national team.

It was a bad week for third year Sydney FC head coach Ante Juric as, in addition to Foord’s departure, Chloe Logarzo, who played with the Washington Spirit for one season in 2019 before being waived after the season and once played in the USL’s W-League for the Colorado Pride, joined Bristol City of the English Super League. Bristol will pay a transfer fee to Sydney. Logarzo has spent six and a half seasons with the Sky Blues and won two Westfield W-League Championships, in addition to 41 caps for the Matildas since making her full international debut in 2013. Logarzo has played 75 times for Sydney FC in the Westfield W-League and scored 12 goals, including 1 goal this season. She has also played in Sweden with Eskilstuna United and Norwegian side Avaldsnes. She had one goal in 15 games with Washington last season.