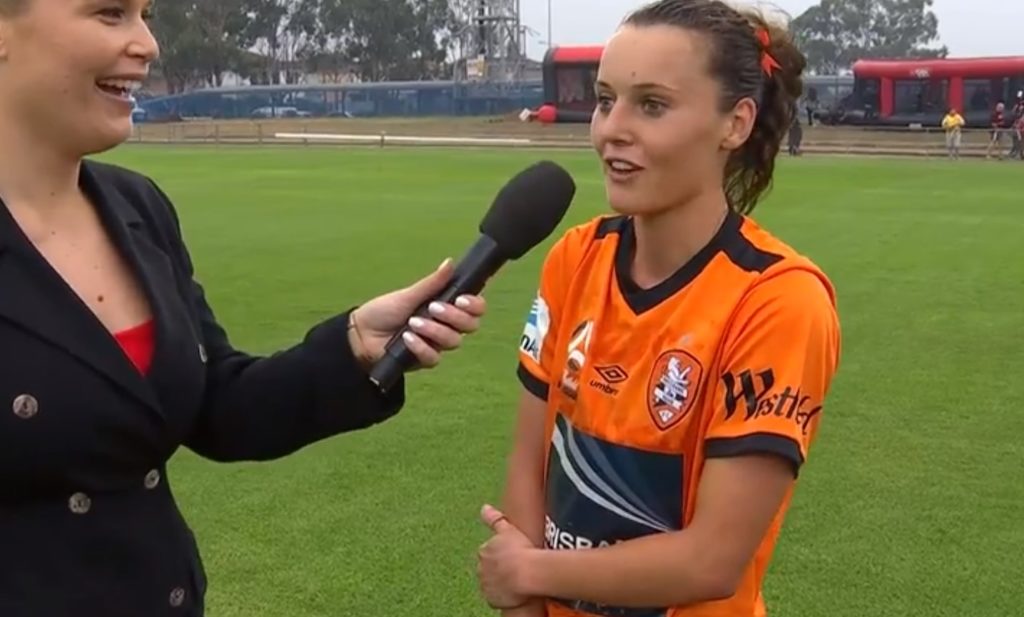 Week 9 of the Westfield W-League is complete, with further schedule shuffling due to the ongoing Australian wildfires. There are many different ways to donate to relief efforts. Here’s what happened on the field:

Forward Kyah Simon was huge in Melbourne City’s seventh consecutive win of the season, a 4-0 home dispatching of Canberra United on Jan. 9. Early in the game, she contested for the ball with former Australian youth international and Canberra United defender Olivia Price (appearing in her 50th W-League match across six seasons), turning her and then dribbling towards the top of the box where she unleashed a powerful, low shot into the far side of the net to give Melbourne City a 5th-minute lead.

Simon earlier in the week had been named to the Australian national team squad for the Asian Football Confederation’s Olympic qualifying tournament next month in China, after missing last summer’s Women’s World Cup with lingering fitness concerns after injuries. She added a second goal from the penalty spot late in the first half — her third of the season — in the 4-0 win to keep City undefeated. Simon played 74 minutes and had 57 touches of the ball along with six shots — five inside the penalty box — the most of any player on either side. The resounding defeat put Canberra in danger of missing the playoffs for the third consecutive season under head coach Heather Garriock, who took the job ahead of the 2017/18 season, a task that became exponentially more difficult when Canberra fell to Sydney FC four days later by another 4-0 scoreline.

Honorable mentions must go to two other Australians with national team experience. Current Matildas forward Hayley Raso was devastating in attack in Brisbane’s 4-0 win at Western Sydney Wanderers on Jan. 12. First-year Roar head coach Jake Goodship’s high-press strategy paid off as Raso stripped Western Sydney defender Alex Huynh (ex-University of Colorado and Troy University in Alabama of the Sun Belt Conference) deep and sent a long shot into the goal with just a small opening against Abby Smith (Utah Royals) on the hour mark for a 2-0 Roar advantage. Raso narrowly missed a couple of other opportunities and was providing great service to her line mates all game.

Theresa Polias, the midfield captain for Sydney FC, only had an assist in Sydney’s 4-0 away defeat of Canberra United in the Round 8 rescheduled game on Jan. 13. Polias had a stellar 91% passing effectiveness ratio on 43 passes and provided outstanding service to her forwards during her 73 minutes on the pitch. Polias has played in every W-League season and has been capped 12 times by the Matildas. Houston Dash loanees Sofia Huerta and Veronica Latsko (her first of the season) scored for the Sky Blues, as did former Washington Spirit player Chloe Logarzo, while Remy Siemsen scored once to take her league-leading goals tally to seven.

Matildas midfielder Emily Van Egmond scored her fourth goal of the season and the final tally of Melbourne City’s 4-0 win over Canberra United with a looping shot from well outside of the penalty area that slid just under the crossbar and past Sham Khamis in goal in the 76th minute. The pass came from substitute and 10-year W-League veteran Rhali Dobson; Van Egmond lifted the ball slightly into the air when she received the pass and hit her strike on the volley.

Save of the Week: MacKenzie Arnold, Brisbane Roar

Australian international goalkeeper MacKenzie Arnold, who signed after the Women’s World Cup with the Chicago Red Stars, stymied Western Sydney Wanderers star teenager Kyra Cooney-Cross twice early in the second half in her side’s 4-0 away win over previously undefeated Western Sydney on Jan. 12. Just after halftime, with the score deadlocked, Cooney-Cross launched a high ball from outside of the box that Arnold had to leap backwards to push onto the post.

Thirteen minutes later, with Brisbane holding a 1-0 lead, Cooney-Cross took a low shot again from distance that Arnold had to dive to push away. Arnold finished with four saves while at the other end of the park, Brisbane scored four times in the space of 20 minutes in the second half to dispatch the Wanderers, with two goals from Australian forward Allira Toby — with her first goals of the season after scoring five each of the last two seasons for the Roar — and one each from Hayley Raso (Portland Thorns) and a first W-League goal for substitute and Australian U-20 international defender Leah Davidson. The Roar’s emphatic win helps to maintain their playoff push after a slow start to the season; they have lost only once in their past six games (including one tie) and are now solidly in the top four on the league table.

Who has your top stop vote for R9️⃣?🧤#WLeague #SOTR pic.twitter.com/GXMtClPkir

Brisbane Roar used a high press to befuddle the Wanderers, who had gone their first six league games without a defeat, plus were coming off a 1-0 exhibition win last week over the Chinese women’s national team. The Wanderers surrendered more goals against the Roar than they did in their previous six games this season (three goals total). Lynn Williams (North Carolina Courage) was away on U.S. national team duty. It will be interesting to watch how Wanderers bounce back next week at home against Perth Glory, particularly as Republic of Ireland international Denise O’Sullivan’s stint as a guest player is over (this rule allows a W-League side to use an extra international above the four full-time contracts for the season). Wanderers head coach Dean Heffernan told the league’s website about O’Sullivan: “She’s irreplaceable as a player. She really is. She’s the motor of a midfield. She just runs it all, she seems to never get tired…She’s constantly everywhere, winning every tackle… she might be the smallest on the field but she’s winning everything.”

O’Sullivan was also named as the W-League Player of the Month by fans in a poll on the W-League website. She played last season as a guest player for Canberra — one thinks that the Wanderers or another W-League side will try to sign her for the full season in 2020/21 after her impressive performances this season.

American forward Rylee Baisden, who played at Pepperdine University in California from 2012 through 2016, made the Roar squad this season after a tryout of state league players after starring with state league finalist Moreton Bay, scoring 33 goals in 24 matches in her first season in Australia. She has not scored this season but has been quite effective in attack for the Roar.

In the 4-0 win over Western Sydney on Jan. 12, she had seven crosses — tied with fellow American Carson Pickett (Orlando Pride) for most of any player in the game — creating four chances, winning five of eight duels and intercepting the ball four times in 90 minutes. She supported the dynamic Roar attack of Hayley Raso (nine shots) and Allira Toby (four shots), who combined for three goals. With her solid season in Brisbane, expect Baisden to further her professional career in either the States or Europe.

Notes: The Jan. 10 Newcastle Jets match at home against Adelaide United was postponed due to air quality concerns from the bush fires, smoke and high temperatures in New South Wales. The Jan. 5 match in Canberra between United and Sydney FC was rescheduled for Jan. 13 and is included in this week’s review.

Australian national team head coach Ante Milicic selected 20 players (including three goalkeepers) to go to China next month for the third round of the Asian Football Confederation 2020 Tokyo Olympic qualifiers. All but two of the selections are currently playing in the W-League, the exceptions being forwards Sam Kerr (Chelsea, England) and Emily Gielnik (Bayern Munich, Germany), who both played in the W-League last season. Melbourne City and Brisbane Roar each provide six players to the side while Sydney FC has three, Melbourne Victory has two selections and 2019 Women’s World Cup team member Karly Roestbakken (18) is the sole selection from Canberra United. One surprise is that long-time Matildas forward Lisa De Vanna (playing with Fiorentina in Italy) was not selected, though she was not brought into the last camp, either.

In Wuhan, Australia will need to finish either in first or second in Group B against Chinese Taipei (Feb. 3), Thailand (Feb. 6) and hosts China PR (Feb. 9) to advance to the final phase of matches for a place at Tokyo 2020. The final round will be home and away playoffs against either Korea Republic, Vietnam, or Myanmar in early March 2020. Democratic People’s Republic of Korea (North Korea) withdrew last week, reportedly upset that Korea Republic (South Korea) decided last month to not submit a bid to host the 2023 Women’s World Cup, with the possibility of staging some games in DPRK, plus the fact that they would have to compete against Group A hosts South Korea in their third-round group next month. 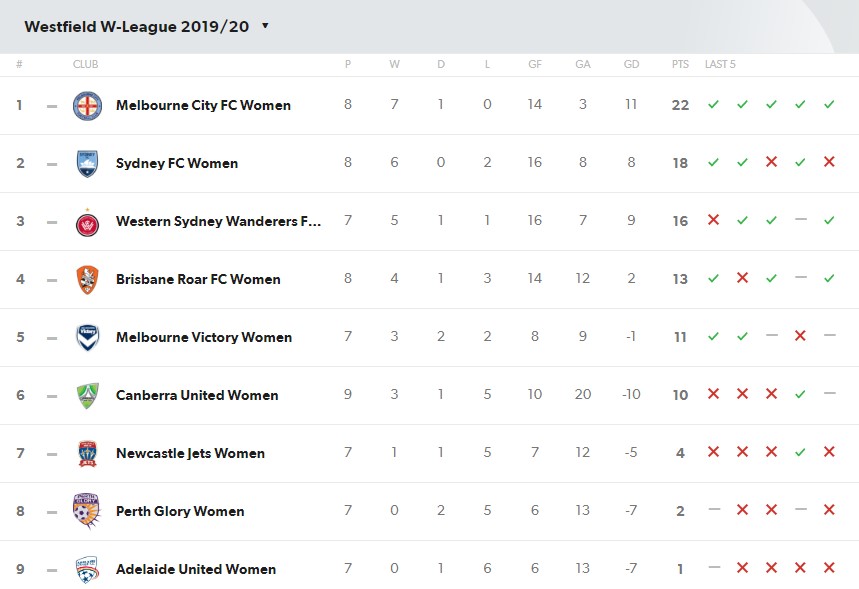