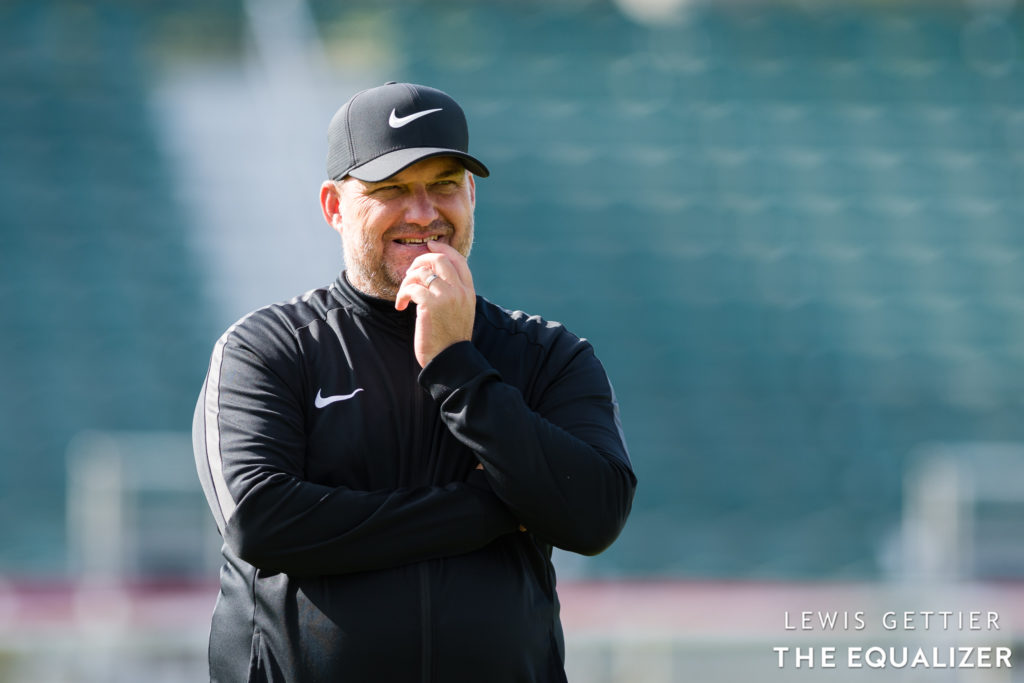 Ten years after a memorable Women’s Professional Soccer (WPS) draft produced what many still believe is the best draft class in the history or women’s soccer, the eighth National Women’s Soccer League College Draft could take us to the other extreme. Yet despite some opinions about the weakness of this year’s class and the potential that the four best players won’t even declare, picks have been moving around fast and furious with whispers of more trades to come.

Let’s start with who is not in the draft and not likely to be. Deyna Castellanos recently signed with Atletico Madrid and will not be part of the draft field on Thursday. Jesse Fleming has been widely linked with a move to France and the Canadian Soccer Association has recently been prompting its young stars to choose Europe over the NWSL. For now, she’s staying in school. Hermann Trophy Award winner Catarina Macario has been widely tabbed as the top pick if she comes out, which looks unlikely.

And then there is Sophia Smith. The Stanford sophomore has been a marvel all through the United States youth system and is currently in camp with the senior team ahead of Olympic qualifying. Scuttlebutt is that Smith is planning to declare for the draft and play for the Portland Thorns, who recently traded for the No. 1 overall pick and would take Smith with the selection.

Unfortunately, the NWSL has stayed staunch in allowing potential draftees until the eve of the draft to submit their applications. So, other than Castellanos, we are not likely to know for sure about the other three until late Wednesday.

In order to obtain the top pick, the Thorns shipped two top-15 picks (Nos. 7 and 14), Emily Sonnett, and the rights to Caitlin Foord to the Orlando Pride. That’s quite a haul if they are not taking Smith or Macario or perhaps another mystery player whose name has not yet been unearthed.

Who got the better of the Kealia Ohai-Katie Naughton trade?

The No. 6 pick was also moved last week. The North Carolina Courage traded up from No. 9 to acquire the sixth pick from the Chicago Red Stars who also secured the No. 16 pick. The Red Stars later packaged the No. 9 pick to grab an extra first-round pick in 2021 — but more on that later. Teams don’t generally trade up as high as the Courage did without a specific player or two in mind. There have also been whispers that they will use the No. 6 pick to move up even higher. One scenario had the Courage moving all the way up to No. 1. But considering Portland coach Mark Parsons’ recent comments that everything the Thorns are doing this offseason is designed to knock off the Courage, those teams would make strange bedfellows in a move for the top pick.

The Reign moving up was something of a surprise, if only because teams on the verge of hiring European coaches with zero experience in the league rarely trade up in the draft. Despite having been in the playoffs during both years being coached by Vlatko Andonovski, the Reign — who did not make a pick at all in 2019 — could be poised for something of a roster overhaul. Could Allie Long be on the move?

Once the first pick is out of the way, Sky Blue will move into a strong position. The New Jersey club holds the No. 2 and 3 picks and unlike a year ago has a strong inclination that top players will sign. Last year, the club used the No. 2 pick on Hailie Mace even though her representation made it clear she had no intention of signing. That standoff ended only last week, when her rights were traded to North Carolina for McCall Zerboni. In the year since Mace and Julia Ashley snubbed Sky Blue, the team has revamped the front office, making Alyse LaHue the full-time general manager. Sky Blue is also set to play at Red Bull Arena in 2020, an exponential upgrade over Yurcak Field.

The Red Stars slot in next, holding the 4th and 5th picks. At one time, the Red Stars held five of the nine picks in the opening round. They moved one to Sky Blue during the 2019 season to acquire Savannah McCaskill. The other moved from No. 6 to No. 9 in a two-for-one swap with the Courage, and then to the Reign in another pay-it-forward move by Chicago coach Rory Dames. The shrewd negotiator has already positioned himself well for 2021 with three first-round picks at the moment (his own, the Reign’s, and the Royals’). And the Red Stars still hold the No. 8 pick on Thursday.

That’s three opportunities for Dames to upgrade a roster that for the first time in seven years is in need of top-level scoring. The Red Stars have added Kealia Ohai and Makenzy Doniak in recent trades, but that doesn’t yet seem adequate to make up for all the goals that walked out the door when Sam Kerr left for Chelsea. And defensive depth is also at issue with Katie Naughton having been traded and Casey Short a decent possibility to be at the Olympics. Will the Red Stars use all three first-round picks, or make more moves?

After the Courage use or move the pick at No. 6, the Pride sit at No. 7. In some ways, this could be the pivotal pick in the entire draft. The first of the Pride picks on the day will also be higher than they have ever drafted before. The team is also in desperate need of quality players and cannot afford to do anything but make good on the picks sent their way by the Thorns. Second-year head coach Marc Skinner has made no bones about this being his make-or-break year. Much of that begins with drafting players who can contribute.

Not mentioned in the first round are the Utah Royals, Washington Spirit, and Houston Dash. The Spirit made a huge splash a year ago with a record-equaling four first-round picks and all of them contributed in a bounce-back season for the club. The Spirit have been flying under the radar, making a bunch of depth signings this winter. Their first pick is No. 23. I expect them to sit tight until then with a minor move up at best. If they do make a splash, don’t discount a Mallory Pugh move, though I would bet against that happening.

The Dash don’t pick until No. 18 and are still very much tweaking their roster. Ohai threw them a curve ball by asking for a trade, which was accommodated.

The head-scratcher of the offseason so far has been the Royals. Clearly in win-now mode, they haven’t acted like it — yet. In two trades, they moved depth forwards Doniak and Katie Stengel but most of the return was for the 2021 draft, where they now own three second-round picks (but no first-rounder.) And they did move up to No. 12 in the Stengel trade. That’s not a first-round pick, but could be after expansion and usually brings the possibility of getting a very good player.

The elephant in the room is allocation money. Each team has $300,000 at its disposal. As yet the NWSL has not seen fit to make these expenditures public so it is possible some of that has already been used. The Equalizer reported the Dash forked some over to Rachel Daly when she re-signed recently.

The Royals are among the teams best positioned to utilize allocation money to bring in an impact player from overseas. Perhaps that’s why it has so far looked like they have been deferring things to 2021.

One thing is for sure: Draft day never ends without some surprises. Whether it be the big Sam Kerr-Christen Press-Carli Lloyd trade disguised as players to be named later in 2018, a new rule and trade designed to get Mallory Pugh to Portland (it never happened) in 2017, or even a team drafting players after essentially having been folded the night before (Boston in 2018), the NWSL draft is a thing to behold.

Let’s see what happens this year…

— Hidden in all the news and trades last week is that Amanda Duffy informed the owners she was stepping down as NWSL president to take a front office role with the Pride. Duffy’s incongruous, three-year run with the league will come to an end Feb. 15. She was initially managing director of operations, but Jeff Plush stepped down as commissioner shorty after she came on the board and the top spot was hers — even if never by name — ever since.

During her time in charge, minimum and maximum salaries have raised significantly, as have budgets for housing and other important elements in the lives of NWSL players. Roster size has grown but the number of teams reduced by one. Promises of expansion and a robust television contract have yielded little. Like most things, Duffy’s time running the NWSL cannot be fairly or completely judged for a few years. But as the owners scramble to find a replacement in time for the new season, it seems like a good opportunity to turn the page and find someone with the vision and wherewithal to push the NWSL into the next phase of growth.

— Everyone involved with the NWSL should be taking a good, hard look at the newly agreed to collective bargaining agreement the WNBA just reached with its players.

— Expect the questions surrounding presumptive new Reign coach Farid Benstiti and his conduct when he coached Paris Saint-Germain. At that stop, Benstiti coached, among others, Lindsey Horan, who had several less than complimentary things to say about her old coach. Presumably, Reign CEO Bill Predmore will be pushed to answer for the hire during this week’s convention.

— It looks like the Reign rebranding could be coming soon as well.

The latest: Four points continue to separate the top three sides as Arsenal, Manchester City, and Chelsea registered victories on the weekend. Liverpool and Manchester United were postponed with no known makeup date set as yet.

The latest: Atletico Madrid struggled at home against Sporting de Huelva managing just a 21st minute penalty. Leaders Barcelona had no such issues, walloping Tacon 6-0 away behind an Asisat Oshoala hat trick. Meanwhile, Real Betis defeated Madrid to move closer to getting out of the relegation zone while another loss by Espanyol left their chances of survival quite slim.