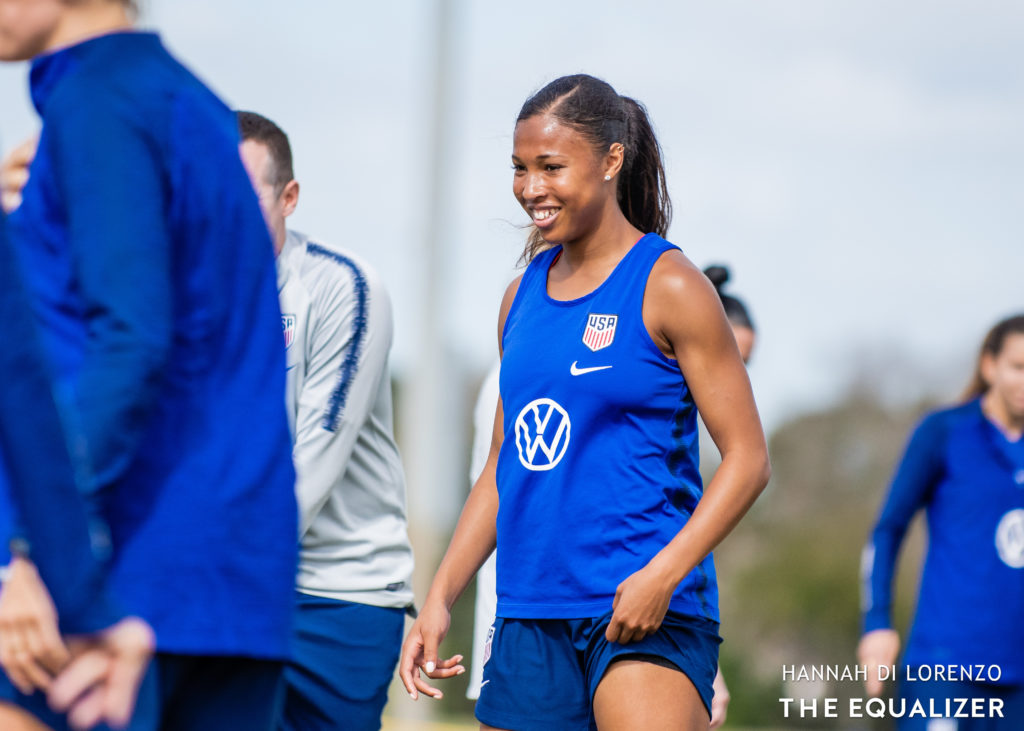 After being (understandably) snubbed by both their first-round draft picks in 2019, Sky Blue FC’s past year has been one of intentional turnover and improvement. Gone are former general manager and head coach Tony Novo and Denise Reddy, now replaced by Alyse LaHue and Freya Coombe, respectively. Gone are the games at Yurcak Field on the campus of Rutgers University; the club will play all its matches at Red Bull Arena in 2020.

With all the improvements to facility and management personnel comes the hope to bring in new players and add fresh talent — and numbers — to a team that only gave minutes to 19 players last season. Sky Blue kicked off their 2020 player acquisitions this week in a trade with the Portland Thorns to acquire Midge Purce and a 2021 first-round draft pick in exchange for Raquel Rodriguez.

At first glance, it’s a good trade for both sides. The Thorns get another piece in central midfield, after losing both Andressinha and Dagny Brynjarsdottir this offseason, in the form of a player who hasn’t fit stylistically well with her team over the past couple years. Similarly, the versatility of Purce is a tremendous acquisition for Sky Blue; she’s a forward with a major upside, who also has the tools to fill in at fullback.

Despite coming off a breakout 2019 for the Thorns, Purce’s departure make sense. It seems that, despite her early-season minutes and the club’s excitement about her development, Portland coach Mark Parsons didn’t rate her all that highly in big-pressure games; Purce was one of the players who moved to a substitute role when the Thorns attack stagnated at the end of the season, and she only played 23 minutes in Portland’s semifinal loss to the Chicago Red Stars, despite scoring a brace in each of her last two matches against them.

Even if Purce’s dwindling minutes were a result of falling off in training while others were stepping up in practice, or Parsons not wanting to put too much pressure on a still-developing player, her reduced playing time reflected a bias that seems to permeate American soccer, even at the youth level: an emphasis placed on technical perfection over an ability to create chances on the field.

Especially during her 2019 season, the focus on technical ability over an awareness to make things happen seemed especially prevalent with Purce; despite a tear where she scored five goals in as many games, critics continued to cite deficiencies in Purce’s game, such as a slight hesitancy in decision making, particularly when the ball was on her left foot. While critical thinking is always valuable, there were times when this analysis began to overshadow the facts of the matter: on the field, Purce was creating and finishing chances. She scored eight goals on 37 shots in 2019.

Despite moving more centrally and adjusting to her new role as a striker — she had previously played primarily as an outside back or wide forward — Purce’s awareness of the field and relentless drive to improve her scoring abilities allowed for her to position herself and make the most of the balls that were fed into her. Purce’s ability to build off even the smallest of openings adds an opportunistic feel to her scoring chances, something that was evident even from her first goal in a Thorns jersey — ironically scored against Sky Blue:

.@100Purcent opens the scoring for @ThornsFC

Positioned to pick off the ball as it deflects off Erica Skroski, Purce is able to ignore the pressure of her defenders and spot the area where DiDi Haracic is cheating to Purce’s right, sliding the ball into the sliver of space on the left before Domi Richardson is able to recover to block her shot.

This ability to drive home a half chance was shown again in Portland’s 1-1 away draw to the North Carolina Courage on June 15, when Purce was able to beat her defender and get a volley on a hopeful long ball to chip Sam Leshnak.

It’s this combination of positional awareness, ability to notice even the smallest pockets of space, and opportunistic instinct to try her luck at them that helped Purce find her footing as Portland’s striker last season. Although the bulk of her offensive contributions came in a period where a number of top players were way at the World Cup — an indication that maybe she’s not yet on par with the quality of Tobin Heath or Christine Sinclair — her success during that time hinted at her potential as a player, something only reinforced by her first U.S. women’s national team appearance in November.

As the Thorns turned to the big names that they have the power to attract, players like Purce became an expendable talent in a league where she’d be highly sought after by other teams. Purce’s skill set will be invaluable for Sky Blue no matter where she’s playing on the field.

Of course, Purce’s game is more multifaceted than simply instinct; her intensity, intelligence, and work ethic — showcased by her continuous drive for improvement — will be essential contributions to rebuilding a winning mentality in New Jersey. This will be particularly useful on a team that — as explained by Kailen Sheridan at the end of last season — is placing a renewed emphasis on individual accountability. And the consistent minutes she’ll earn on a talented Sky Blue squad won’t hurt her own development, either.

Thorns acquire No. 1 pick in 2020 draft, Raquel Rodriguez; ship Sonnett to Orlando, Purce to Sky Blue
The NWSL says it has a ‘Rooney Rule,’ but no one seems to know much about it