The Lowdown: XI wishes for the NWSL in the new year 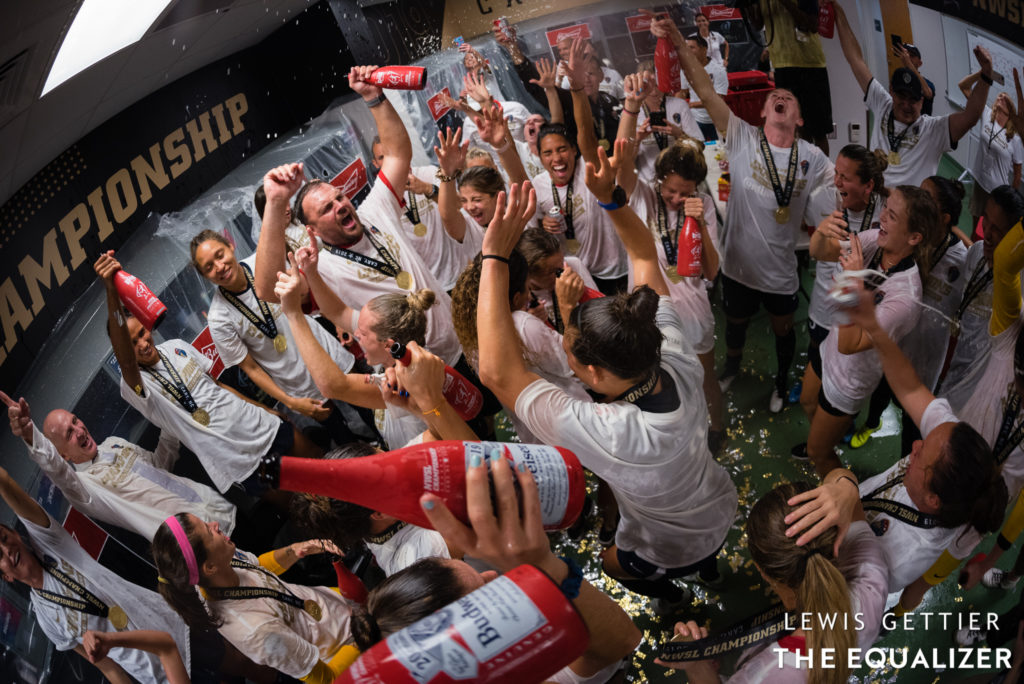 Stop me if you’ve heard this before: This is a big year for the National Women’s Soccer League.

Yes, that gets to be a tiring narrative. In some ways, when a league is younger than 10 years old, every year is a big one. A colleague told me this week of listening back to a media scrum with Amanda Duffy in a 2017, when she said the league hoped to expand by two teams in 2018. Utah did join the league for the 2018 season, but they were rushed in to replace FC Kansas City. Three years later, the league is one team short of where it was in 2017.

Meanwhile, Duffy is stepping down as league president. That appears to leave a leadership void and will regenerate discussion of a commissioner search that is nearly three years in the making since Jeff Plush left that post in March 2017.

But alas, it is a new year with new challenges. So here is a look at my XI wishes for the NWSL in 2020.

Before I begin, a note about The Lowdown. Posted at the bottom are the latest tables from various leagues around Europe. This is a new feature that I plan to include every week. All leagues won’t be included every week, especially if they do not play. It’s a bit of a drag on space but know it will be the absolute last item each week. So when you read WoSo around the World, you’re at the end of the column!

Onto my XI…some of which you may have heard before.

I. Make the NWSL Championship the WoSo party of the year

The amazing thing about women’s soccer fans is that they pretty much manage to make this happen on their own (and we did in 2019). But imagine if there was even a little support from the league. The open training session the day before the match? Start promoting that midway through the season. Get the NWSL Championship date set soon (ideally before the previous final) and push it into the host team’s season ticket package. Secure hotel blocs for traveling fans and make it easy for people to make last-minute decisions should their teams reach the final — or not. Find somewhere in the host city to display the trophy during the week. The first step is selecting a venue and finding an organizing committee to help put these things in place. It might take a small investment, but it would be worth it.

II. Find a TV partner to fall in love with

For the seventh time in eight years, the New Year’s Eve ball dropped without an official television partner for the league. Actually, 2019 was ushered in with Lifetime still in the mix but that deal died before preseason. The NWSL recently hired Octagon to help negotiate the next media rights deal. Eighty or so days later, it has been radio silence.

There is not much benefit of the doubt left for this league, but seeing as the Octagon partnership is new, we can offer a little slack on this front. But at some point, it would be nice to develop a sustained partnership with a television network and/or streaming service. Something that mixes the enthusiasm of Lifetime with the relative reach of ESPN would be ideal. Does such a destination exist? Maybe not, but note how the NHL took its game to Versus, which is now NBC Sports Network, and the property grew along with the network. That was 15 years ago.

III. Find a strong commissioner who is both a leader and a visionary

The Amanda Duffy news appears to have come at an awkward time but if — and this is a big if — the league reacts well it could turn out to be a watershed moment. Depending on who you believe, the commissioner search has been going on since March 2017, since last summer, or not at all. But with Duffy leaving, the time to act is now as there is no obvious interim, as Duffy was to Jeff Plush.

The next leader should be bold and visionary, someone willing to work for the owners to make the league profitable, and whom the owners should be willing to cede some power. It should be someone willing and excited to put their face in as many places as possible to tell the world about the NWSL. Pete Rozelle, David Stern, and Don Garber come to mind as commissioners who have willed their respective leagues over hurdles that probably seemed insurmountable at the start of their tenures. Who is the great leader the NWSL is so desperately seeking?

IV. Figure out a way to grow the news cycle

For whatever reason, the NWSL doesn’t like to say anything until it is ready to say everything. Maybe Duffy’s proclamation about 2018 expansion is a cautionary tale. But why are we into January without any sort of inclination about opening day, schedule format, competition rules, or any other nugget about the 2020 season? Why didn’t Amanda Duffy’s media availability at every NWSL Championship begin with some sort of news nugget? Even an incomplete one would have carried a few days of banter and speculation.

The XFL, scheduled to launch next month, has a major press event scheduled for Tuesday to announce a bunch of rules and other elements of its first season. But the league has also strategically released snippets over the course of the last year. The NWSL is not ready to be a full-blown, 365-day-a-year news force, but there are creative ways to remain relevant at different times during the offseason.

I include this every year. Five yellow cards and you’re out for a game. That’s fair enough, but is it reasonable to sometimes expect players to go 15 games or more without a yellow with nothing to show for it? How about five clean games — or maybe 500 clean minutes — to wipe away one yellow? Or maybe 10 clean games or 1,000 clean minutes to expunge them all? (Yes, I know the math there is not perfect). No one wants a league where it’s too easy for players to be suspended.

VI. Figure out the future of the U.S. Soccer relationship

Many of the items here are contingent upon cooperation from U.S. Soccer. Right now, the NWSL is like a petulant college graduate aching to get out on its own but also unable to live the life it wants without support from the homestead. Unfortunately, it does not look like U.S. Soccer is willing to play the role of a loving parent.

As a result, the sides were unable to come to a working agreement for 2020 and will carry on at least one more year of status quo. This is not necessarily a bad thing as much as it offers more limbo and uncertainty. And there has been way too much limbo and uncertainty throughout the NWSL’s existence. Instead of chaotic negotiations that hold up the news cycle and may or may not have stymied 2020 expansion, how about the sides work out a three- or five-year plan that ends with NWSL owners standing on their own? It has to happen eventually.

VII. Find a clever name for the NWSL Championship

That name is boring and requires too many syllables. Budweiser grabbed the naming rights in 2019 – was that a one-off or was that a multi-year arrangement? – and just added, “presented by Budweiser.” Oof. The Budweiser Cup would have been corny, but also simple and a much easier way to drive home the sponsor relationship (see the custom branded bottles in the photo above). Whatever it takes though, find a clever name and start marketing it. Today.

VIII. Louisville, where are you?

The NWSL announced it was expanding to Louisville for the 2021 season back on Oct. 22. In November, news leaked that the team was planning to call itself Proof Louisville FC (seriously). Now, go ahead and find me all the articles since then about the team. Then find me the link to season tickets. Then find me on the league’s official website where I can find information about the team. I’ll wait… (I eventually found a link to season tickets via Twitter, but unless I’m missing something, it is not easily navigated to from the Louisville City home page.)

I realize how difficult it is to build a superb website, especially for something like a professional sports league with so many moving parts and so much unpredictability. But here are three must-haves on the NWSL site besides information about Louisville:

3) Get with Opta and make sure all player names are uniform across the entire site. Currently Opta uses full names like Marta Viera da Silva

X. Find ways to be innovative

We talk a lot about the crowded sports landscape. That means the NWSL needs to figure out ways to stand out in the crowd. I admit this is not my area of expertise, but I know the absence of something when I (don’t) see it. How about more players and coaches being mic’d up? How about hiring a film crew once a week — once a month, even — to produce an NFL Films style review of a game? Or maybe more attention should be paid to certain off-field matters like the Ashlyn Harris-Ali Krieger wedding or what NWSL players currently in Australia are doing to help with the wildfire crisis there. (Going back a few years, Kealia Ohai’s now fiancé J.J. Watt helped raise more than $30 million to aid Hurricane Harvey relief efforts, something almost entirely overlooked by the NWSL.) There are countless others. Find them. Make the NWSL the subject of water-cooler talk. Give people a reason to find it and to love it.

XI. Mandate owners to speak once a year

All NWSL teams should have a designated owner and that person should be mandated to hold open media availability at least once a year. Some owners are already great at making themselves available. Others are not. But if every team were required to give a public update once a year, it would lay the groundwork for lots of coverage and more transparency about those clubs. Not only that, it would help set the tone for better availability throughout each organization.

Woso around the world

The latest: Sam Kerr started and assisted on Bethany England’s equalizer to lead Chelsea to a 3-1 win over Reading in her debut with the club. Chelsea’s 2019 ended on a sour note when a 1-1 draw against lowly Liverpool dropped them out of a Champions League position.

The latest: Lyon’s quest for a 14th consecutive league title is in good hands after they won the first match against PSG late last year. Their Paris rivals meanwhile have been held twice, Lyon just once. It has now been more than three years since Lyon has dropped a league match and more than a decade since they have lost to anyone other than PSG.

The latest: The Frauen Bundesliga will remain dark through January. After a February 9 makeup match, regular action returns Valentine’s Day with Hoffenheim trying to keep their Cinderella title hopes alive with a visit from Wolfsburg. The only loss for either side this season was Wolfsburg’s 3-0 win over Hoffenheim in September. A reversal of the result will throw the top of the table into chaos as Bayern Munich look to climb back into a Champions League spot.

The latest: Barcelona appear poised to regain the title after four straight years as runners-up, the last three to Atletico Madrid. The latter opened the new year being held 1-1 at Rayo Vallecano, their third draw in their last five. They’ll need help to make the January 25 visit from Barca be for the league.

Who got the better of the Kealia Ohai-Katie Naughton trade?
Thorns acquire No. 1 pick in 2020 draft, Raquel Rodriguez; ship Sonnett to Orlando, Purce to Sky Blue