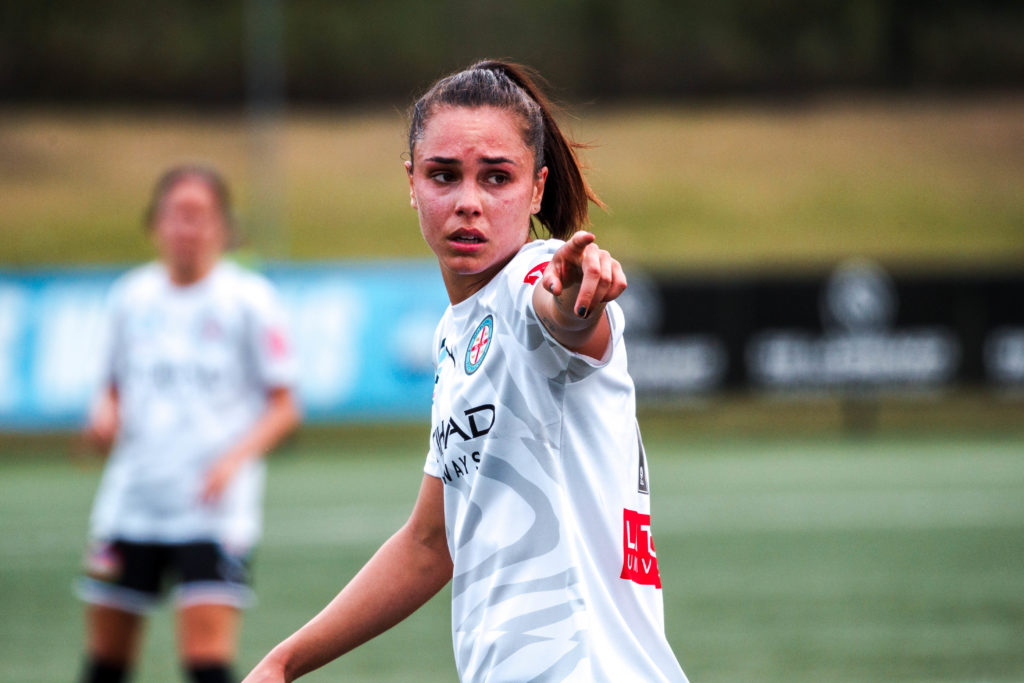 Here’s look at the Week 7 highlights from the Westfield W-League in Australia.

Erica Halloway, nominally a forward who has been playing as a wing back for the Wanderers this season, was outstanding in Western Sydney’s 4-0 away win over Canberra United on Dec. 26. She had a pinpoint cross to Kyra Cooney-Cross for the first goal and fed 11 crosses in total to her talented forwards.

At 35, Halloway’s veteran presence has been impactful for Western Sydney and her fifth W-League campaign with the Wanderers has certainly been so different from past seasons, when the side has struggled, particularly in 2018/19 when they only accumulated 4 points.

Amy Jackson scored two goals to give Melbourne Victory a 2-1 away win over Perth Glory on Dec. 28, one in each half. Her first goal in the 33rd minute was a spectacular long-range strike from well outside of the penalty area with her left foot; her shot bounced off of the crossbar and past Glory keeper Eliza Campbell into the net. She scored her second goal and the game-winner from right in front of the goal after headed attempts by Tasha Dowie and Rosie Sutton set her up for the easy tap-in.

Jackson, in her ninth W-League season, played at Florida International University from 2007-2010 and had a brief stop with Incheon Red Angels in the Korea Republic. She won three Grand Finals with Melbourne City and one with the Victory in 2014; she returned this season to her original club. She now has 13 career league goals in 95 games and should top 100 appearances all-time by the end of the season.

Amy Jackson gives @victorywleague the lead over @PerthGloryFC with an absolute wonder goal!

Adelaide United goalkeeper Sarah Willacy flew through the air in the 62nd minute to parry away a sure goal off of Veronica Latsko’s head, as the striker was just a few yards out from goal, to keep Adelaide scoreless against Sydney FC on Sunday Dec. 29. Sydney eventually won the match 2-0 on an own goal by Amber Brooks (Houston Dash) from a Remy Siemsen shot on goal and a long-range Princess Ibini blast to take the points and pull within 1 point of joint leaders Western Sydney and Melbourne City. Latsko started her first match of the season as she recovers from a leg injury suffered early in the NWSL season and was subbed out in the 66th minute for the Matilda Ibini, who scored her ninth W-League goal in her fifth season in Sydney.

.@Willacy20 pulls off a surefire Save of the Week contender, tipping Latsko's headed effort over the bar 🧤#SYDvADL #WLeague

Special mention must go to Newcastle Jets’ Claire Coelho, who made two saves in quick succession in the first three minutes — from Hayley Raso (Portland Thorns) and Carson Pickett (Orlando Pride) of the Brisbane Roar — to keep the match scoreless. She had a phenomenal game and finished with 15 saves on 17 shots as Brisbane won at home 2-1 to tie Canberra United for fourth and the final playoff spot, though Brisbane has a game in hand. Coelho, 23, played only 11 games in three previous seasons for the Jets and on loan briefly to Sydney FC before becoming the Jets’ starter this season. She has never been capped at any level by Australia.

Denise O’Sullivan, the North Carolina Courage loanee, Republic of Ireland international and current Football Association of Ireland Player of the Year, has looked quite good all season for the Wanderers but took her play up a notch on Boxing Day. She scored the second goal in the Western Sydney Wanderers’ 4-0 away win over Canberra United, her first of the season. O’Sullivan had 82 touches, the most of any player in the game and 77% passing accuracy on 48 passes. She had five shots on goal. She scored against Canberra — the side she played with in 2018/19 — in the 69th minute to make the score 2-0 after Kyra Cooney-Cross scored her fourth of the season late in the first half. Two other North Carolina Courage loanees both scored late goals, as Kristen Hamilton scored her fifth and Lynn Williams her fourth of the season to take the final score to 4-0.

The Wanderers continue their historic season and are still unbeaten after six games. They had their first ever road shutout (with Utah Royals loanee Abby Smith in goal for her third game without allowing a goal) and the first time they have had two consecutive shutouts. This was only their second win ever against Canberra (and first away) in 11 matches over eight seasons (including three ties); previously they had only scored once in the capital city in five games, having surrendered 13 goals. Their 16 points in the league is the most that they have achieved ever, besting their previous high of 13 points in 2012/13 and 2016/17. Their next target is the record for goals in the season, and with nine in their last two games against Sydney FC and Canberra — both against teams currently in playoff spots — they should shatter their record of 19 goals which they achieved in their inaugural season of 2012/13. Any doubts that the Wanderers would cave after the first month of the season are clearly gone and this is a championship caliber team that is playing quite sophisticated soccer.

Elise Kellond-Knight, recovering from a hamstring injury, played her first W-League game this season, coming on at the 75-minute mark for Brisbane Roar in their 2-1 victory over Newcastle Jets in front of 2,189 fans in Brisbane. Kellond-Knight, who played for Reign FC and the Washington Spirit in 2019 — with the latter side waiving her after the season — is back with the Roar after playing with them for six seasons from 2008/09 through the 2014 campaign, winning two W-League titles. She played last season at Melbourne City after playing in Germany and Sweden.

Sydney FC attracted 3,373 for their home match against Adelaide, part of an A-League doubleheader and just behind the season high crowd of 3,446 that Newcastle Jets drew in Round 3 against Canberra, which was again a doubleheader match with the A-League Jets.

Adelaide United’s record for fewest points in a campaign is 0 in 2010/11 while they have 3 points in two other seasons. Hopefully this club will pull some points off their opponents in the second half of the season as they had 13 shots to 16 for Sydney in their 2-0 defeat. This is clearly a situation where their record is not reflective of how well they have played overall and they battled Sydney quite evenly in an exciting match. 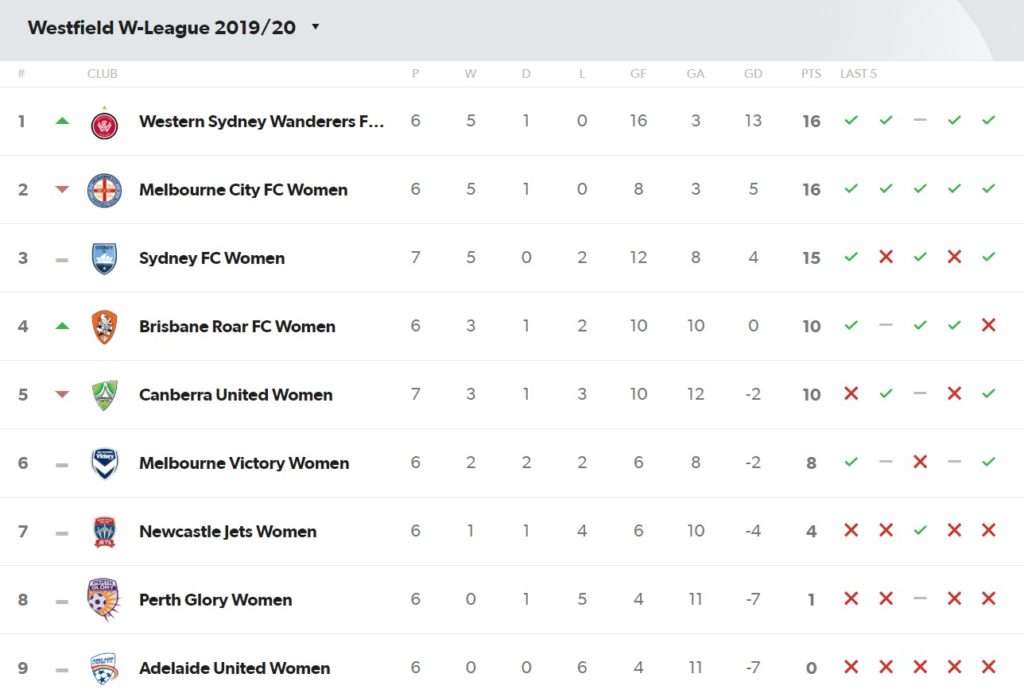 Three Women’s World Cups, three defining moments this decade
The best stories from The Equalizer in 2019