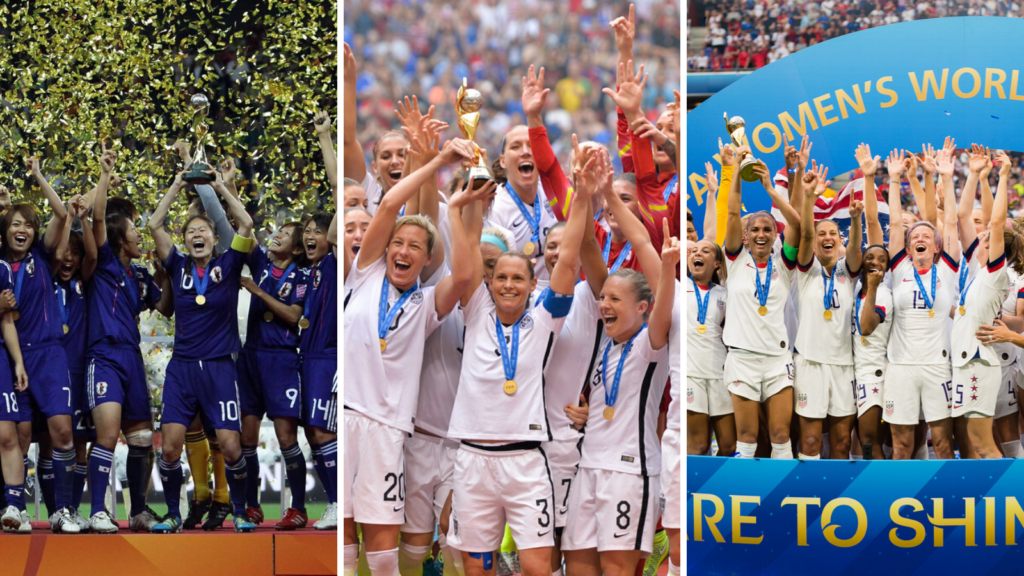 The 2010s in women’s soccer can very much be defined by the three World Cups played during the decade. This may not seem so novel, but it is quite possible that in 25, 50, or even 100 years, the World Cups of the 2010s will maintain a pivotal place in the growth of women’s soccer in the United States.

I know what you’re going to say. It was 1999 that came first and will always be at the top of the mountain. And it’s true, every nugget of women’s soccer can be traced back to the organizers of that tournament, who instead of wishing it would be a big deal, went out and made it into a big deal.

But the unpopular reality is that much of that momentum had been stunted by the time 2011 rolled around. The United States had not won a World Cup since, and when they were shocked by Mexico in qualifying, they played a two-leg, intercontinental playoff against Italy in virtual anonymity. The top story in the interceding years was Hope Solo’s tirade after the 2007 World Cup semifinal loss. But Solo did not play in that match, and beyond the inner circle of die-hard fans, there was not much in the way of analysis of why the team had lost or what could be done to make it better.

When the team played at Red Bull Arena in their sendoff match before heading to Germany for the 2011 World Cup, all of 5,852 fans saw fit to show up to help send them off.

And then came what stands as the single most important moment in the evolution of women’s soccer in the United States. Facing quarterfinal elimination to Brazil and a competitive low point for the program, an amazing thing happened. While Brazil players flailed and floundered without the slightest clue about how to close out the match, the U.S. put heads down and kept working. Eventually, with time literally running out, Megan Rapinoe found Abby Wambach with a glorious ball into the box. Few sights in the women’s game struck fear in opponents more than Wambach getting a clear shot at a header inside 10 yards. And that’s exactly what she had from Rapinoe’s pass. If everyone was surprised the U.S. could dig out of a deficit they mostly created for themselves, no one was surprised that once Wambach’s head became destined for clean contact with the ball that it was going to wind up in the back of the net.

That goal, that moment, changed the course of women’s soccer in a way that has sustained over the eight years since. Back home, the World Cup went from casual afternoon viewing to water cooler discussion. Though the team did not win the tournament (yes, penalties were necessary to finish off Brazil in the quarters, and penalties were their undoing in the final against Japan) it woke up a dormant fan base which then quickly multiplied.

There was a small but short-lived impact on the domestic league, WPS. Record crowds flocked to Wambach’s home town of Rochester to see her and Rapinoe as visiting players (not playing but happily in attendance) for magicJack. The reality was that there was no moment that could save WPS from itself by that point, and less than two months later, it had played its final game. But the glimpse of what things could look like paved the way for the NWSL to launch a little more than a year later.

In the meantime, the U.S. thrilled fans once again beating Canada in a stirring and controversial Olympic semifinal at Old Trafford. Three days later, they gained a measure of revenge on Japan and won a third consecutive gold medal. It set the tone for 2015.

By 2015, there was a very specific narrative surrounding the U.S. team. They had to win. The attention heaped on the team after Wambach’s heroics four years earlier had been a blessing but also a burden. It was now 16 years since that 1999 thing that many current fans were aware of only faintly or through stories. The U.S. had not won the World Cup since. The pressure was coming from above as well as from the fans. In a move best described as surprising, and most certainly classless in the manner it was handled, U.S. Soccer fired Tom Sermanni 14 months ahead of the World Cup opener. Jill Ellis came in and it was obvious from the start her only focus was on 2015.

The 2015 World Cup was a phenomenon. In some ways, it carried momentum from 2011. People cared. The matches mattered. Even the roster mattered, as the fallout from Crystal Dunn’s exclusion showed. In other ways, 2015 was a springboard for 2019. The hot-button issue ahead of the tournament was FIFA’s acquiescence that Canada stage the even on artificial turf. There was some token litigation that didn’t work for Canada, but it did lead to an agreement that the women would never again have to play a World Cup on anything besides grass.

The 2015 tournament was also a phenomenon because of its location. Familiar time zones meant familiar kickoff times and Americans could attend matches without crossing an ocean. Indeed, the night before and after the final, the streets of Vancouver were adorned with as many American flags as one might see at a 4th of July parade.

The Americans did win comfortably after Carli Lloyd took matters into her own hands with a hat trick in the opening 16 minutes of the final against Japan. But not much of the tournament was comfortable, and the resulting hand wringing among the now established fan base was another sign of how far the game had grown in four years. Debate still rages, and likely always will, about whether Ellis would have found her new formation had Rapinoe and Lauren Holiday not been suspended for the quarterfinal due to yellow card accumulation. The answer matters less than how many people care enough to have passionate opinions on it.

When the team returned to the U.S., they were feted with a ticker-tape parade through New York City’s Canyon of Heroes. Then president Barack Obama uttered the famous line that from that point forward, “playing like a girl means you’re a badass.”

Like 1999 and 2011, the World Cup of 2015 created an entirely new batch of women’s soccer fans, and unlike those two trailblazers, this time they had an established pro league in their midst that was not teetering on the brink.

Four years later, there did not seem like there was much that could top previous World Cups. Maybe the disaster that was the 2016 Olympics was a blessing in disguise for 2019. At that Olympic tournament, Ellis made the decision to bring Rapinoe, who was still in the final stages of recovering from ACL reconstruction surgery. In the end, Rapinoe was subbed into — and then out of — what was a disastrously managed quarterfinal against Sweden. The U.S., after failing to break down the Swedish block, fell in penalties and for the first time at a World Cup or Olympics, did not reach the semifinals.

Three years of tension followed. Ellis tinkered with the roster and the formation, sometimes to agonizing extremes. Rapinoe recovered fully, knelt during the national anthem, was dropped from the team and then brought back. Australia, England, and France all built teams that looked like they could contend.

The United States responded by peaking at the right time and tore through the 2019 World Cup with the perfect blend of style and substance. When the whistle blew, their soccer did the talking. Between the games, with Rapinoe taking the lead, they used their pulpit to push issues that dwarfed the artificial turf quandary from four years earlier. At the heart of it was equal pay, the catchphrase of litigation brought by the players against their U.S. Soccer bosses searching for an even split of revenue with their male counterparts.

By the end of the World Cup, stadiums across France were filled with “Equal Pay” chants, none more poignant than at Parc Olympique Lyonnais, where the U.S. finished off a second consecutive world championship.

It is too early to calculate the lasting impact of the 2019 World Cup. Surely it will resonate for all who surveyed as a moment when a bold group of women took on the world’s best soccer teams, and many of the world’s most antiquated establishments.

We will soon know the location of the next World Cup, set for 2023. It will have a tough act to follow.