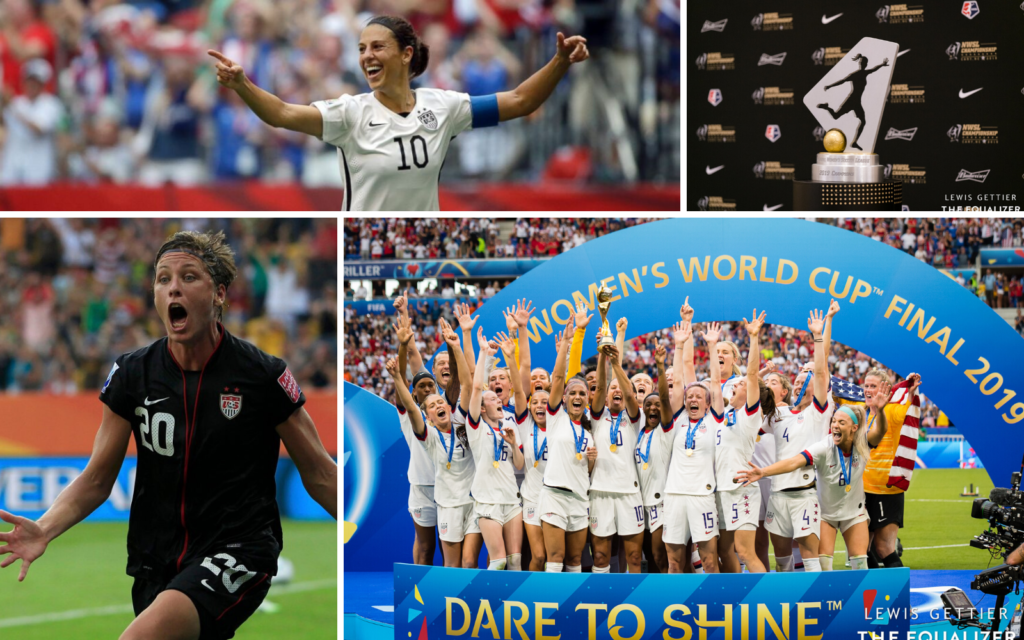 Nostalgia runs extra thick around this time as the obligatory year-end countdowns collide with the need to recap the entire past decade. We’re wired to reflect on these milestones, however arbitrary that perfect increment of 10 might feel in a world where reality is not nearly so linear and rigid.

Sports have changed immensely over the past 10 years, soccer included. The 2010 Men’s World Cup and 2011 Women’s World Cup feel like the stone age now; neither goal-line technology nor video review was used during either. By the end of this decade, both had (in the case of video review, quite controversially) integrated their way into the sport’s mainstream.

Women’s soccer has changed drastically since 2010 — particularly in the United States. Whereas the decade might present an incomplete reflection point for some parts of life, these final days of 2019 are fitting and timely to look at where the sport is now and where it was 10 years ago. Specifically, the status of the United States women’s national team, and professional women’s soccer in the U.S., has changed drastically. Those stories, too, are incomplete, but the characters and the plot have drastically developed.

The National Women’s Soccer League is infinitely stronger than Women’s Professional Soccer — the U.S. pro league in operation at the start of this decade — and has already lasted over twice as long. There are still many questions about what the league’s exact future holds, but they revolve more around keeping up with the rest of the world than they do simply surviving.

Most significantly, changes over the past decade has played out on the international stage, through the U.S. national team. As I wrote in “The Making of the Women’s World Cup: Defining stories from a sport’s coming of age,” the 2011 World Cup quarterfinal between the U.S. and Brazil was the catalyst to everything else which has followed for the team. The U.S. team’s popularity surged in 2015 behind a run to the World Cup title. This summer’s repeat title transcended sporting boundaries and placed the U.S. women into the pantheon of iconic sports legends whose impact will be felt beyond their field of play.

It was, however, the 2011 Women’s World Cup — the first of three this decade — which laid the foundation for those moments. Without that tournament and the frenzy which came from the U.S.’ wild one-week knockout-stage run to the final, the team doesn’t garner the same attention at the 2012 Olympics, likely spending the following four years in relative anonymity again.

The U.S. women entered the decade at its lowest popularity point since the early days of the team. June 5, 2011, remains a reference for a few of us who have covered this sport during the past decade. It represents an inflection point which illustrates how drastically things changed for the United States women’s national team in the matter of a few weeks.

A mere 5,852 fans showed up to Red Bull Arena that day to watch a lackluster U.S. team narrowly defeat Mexico on a late goal from Lauren Cheney. That was the level of buzz for the team then: a mostly empty stadium for a World Cup sendoff game just outside of the country’s largest city, with then U.S. Soccer president Sunil Gulati defending the attendance in an impromptu halftime chat with media, noting that Sunday afternoons are difficult to sell with youth soccer players otherwise occupied.

The buzz around the team — and the sport — was a fraction of what it was a decade earlier. The shine of 1999 had worn off, and the anticipation of the Women’s United Soccer Association (2001-03) was replaced with obviously inevitable collapse of Women’s Professional Soccer (2009-11), which spent that 2011 World Cup window locked into a brewing legal battle with rogue magicJack team owner Dan Borislow and had only five other teams in the league. WPS got a noticeable bump in attention after the World Cup, but it was already a dead league walking.

It isn’t hyperbole to say that women’s soccer was, at that very moment at Red Bull Arena, irrelevant to the mainstream sporting conscience. The Americans weren’t world champions then as they are now (though they had retained their Olympic title). Nor were they the cultural icons which they’ve become over the past few years as they’ve fought for equal pay and women’s rights.

Anecdotally, there appear to be a lot of fans who have started following the sport and the team over the past few years — and that is spectacular. Statistically speaking — from attendance, to TV viewership and digital media metrics — the spike in the sport’s following absolutely came in force following the 2015 World Cup, in the back half of this decade.

So, moments like June 5, 2011, are often overlooked. Stories from those early years can often feel like some sort of urban legend. Those magicJack stories? They mostly only scratch the surface. Alex Morgan’s first international goal? That was scored on Oct. 6, 2010, in front of a whopping 2,500 fans on a miserable night in Chester, Pennsylvania. One month later, the U.S. would lose to Mexico in the semifinals of Concacaf World Cup qualifying and be forced to defeat Costa Rica in the third-place game just to get to an intercontinental playoff. There, the Americans narrowly defeated Italy (thanks to another important goal from Morgan in stoppage time in Italy) in a two-leg playoff to become the last of 16 teams to qualify for the World Cup… as the world’s No. 1 ranked side.

That series of events — the most shocking of the decade, particularly in retrospect — happened in the relative anonymity of 2010. It is, however, easily and perhaps rightfully forgotten thanks to all the incredible things that happened soon thereafter.

July 10, 2011, changed the trajectory of the U.S. women’s national team and the entire sport in the United States. The U.S. was about to lose at the quarterfinal stage for the first time in a major tournament. Brazil led 2-1 in extra time, and the U.S. had 10 players. Then, of course, it happened — Megan Rapinoe’s cross to Abby Wambach for the most improbable equalizer.

Before the Golden Ball, Golden Boot and World Cup title in 2019; before she struck a pose and beefed with Donald Trump; before she kneeled and nearly lost her place on the national team; in those early days of her bleach-blonde do, Megan Rapinoe delivered the most important cross of her career, one which got the Americans to a penalty-kick shootout (which they won) captured the attention of the entire sporting world and put the U.S. women back on the map at home. As Rapinoe and Wambach each told me in interviews for “The Making of the Women’s World Cup” book, there was an awkward dichotomy when they returned home. They recall being greeted as heroines and congratulated for winning when they felt like failures for losing to Japan in the final.

Sports are never linear, but since then, the U.S. women have continued to rise in stature and prominence, the 2016 Olympics fallout the only real on-field hiccup since. They won the 2012 Olympics in epic and captivating fashion yet again, defeating Canada 4-3 after extra time in the semifinal. Then came the 2015 World Cup title and Carli Lloyd’s hat trick, capped off by a goal from midfield. Four years later, the Americans won it again, and this time there was little doubt along the way.

Working in sports has a different effect on everyone, but the longer a person works in sports, the more accustomed he or she is to the chaos. Smaller ripples in the sports world — the trades, the upsets, the suspensions — become commonplace. It takes something truly special to surprise, to thrill.

That can be a high threshold. Which moments produce goosebumps every time they replay, no matter how many times they’ve played or how many years have passed? Which moments make you straighten you posture and snap your head back in amazement?

As rare as those moments can be, the U.S. women’s national team has a propensity for creating them, both historically and recently. There was the aforementioned Rapinoe-to-Wambach equalizer in the 2011 quarterfinal, which so many experienced through commentator Ian Darke’s exclamation that “ABBY WAMBACH HAS SAVED THE USA’S LIFE” as Wambach slid into corner flag, mouth agape at the idea of scoring that goal in the 122nd minute.

One year later, it was Alex Morgan scoring the game-winner against Canada in the 123rd minute of that Olympic semifinal, as commentator Arlo White let out an audible shriek at the idea of that ridiculous game having one last twist in it. The Olympics are a more difficult platform to own because there is so much happening at once, but the U.S. women’s soccer team was once again one of the main stories at London 2012. NBC’s digital newsroom in Stamford, Connecticut, with producers for the other 20-something sports, basically stopped everything else as that semifinal progressed. It was the most entertaining game of the decade, easily.

Lloyd’s 2015 goal from midfield, as seen from inside B.C. Place in Vancouver, felt like some sort of alternate reality in which time was suspended. She took that long stride toward the ball at midfield, as if she was about to launch a shot from some improbable distance, and when she did, there was this moment when so many inside that dome simultaneously held their breath, only to exhale in shock when the ball went into the net. It was the most audacious goal on the grandest of stages.

This year’s World Cup was more than just a major sporting event, the enduring goosebump-producing moments coming from the stands. A sold-out Parc des Princes belting out La Marseillaise ahead of the USA-France quarterfinal had the feeling of a game that the entire world should be watching. Groupama Stadium in Lyon drowning out the introduction of FIFA officials after the World Cup final with chants of “EQ-UAL-PAY” was a marked evolution from the booing those officials received in Vancouver four years earlier, and it was a fitting end to a transformational tournament.

Those moments, of course, were some of the biggest and best of the decade. So many more have shaped the sport behind the scenes and away from the field.

There is the U.S. team’s ongoing litigation with the U.S. Soccer Federation for equal pay.

There are the meetings shaping the future of the professional game.

There is the slow uptick in media interest in the sport.

All these things put the sport in a much better place entering 2020 than it was at the start of 2010. Sustaining this trajectory will be crucial to women’s soccer — and women’s sports as a whole — continuing to rise to a place of long-term stability and mainstream acceptance.

If the landscape looks entirely different in 10 years, the past decade proved that can be a very good thing.