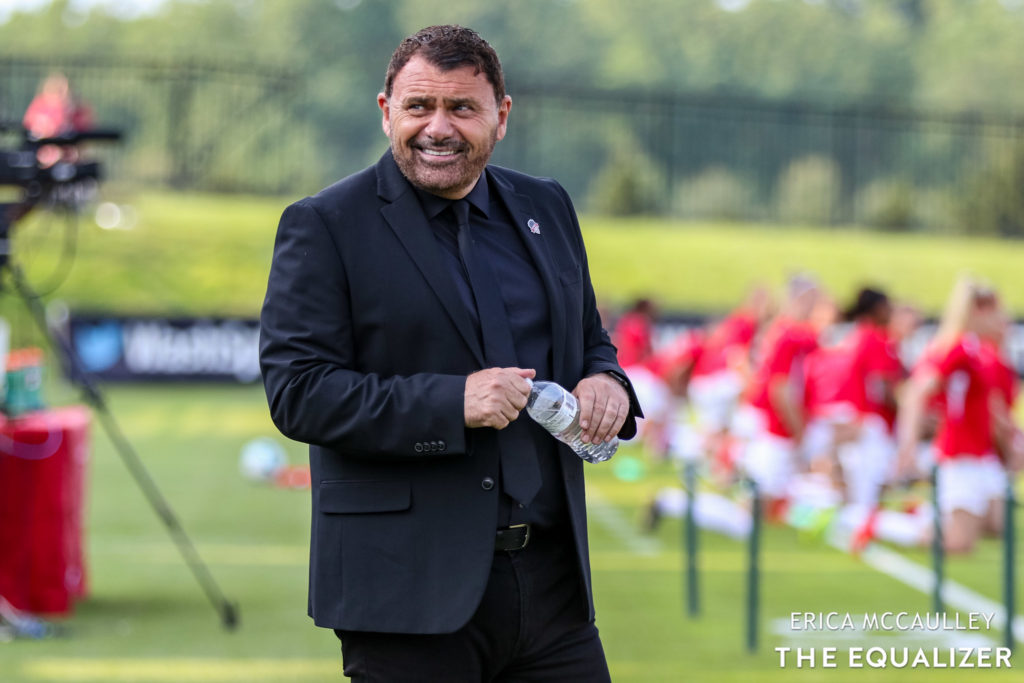 It’s going to be a new-look roster for the Washington Spirit in 2020. Head coach Richie Burke, on a recent conference call with reporters, spoke about new signings, allocation money and what he’s anticipating for next season.

One season into his tenure as Spirit manager, Burke admitted that roster changes will commence this offseason.

Washington already made three new signings in the last two weeks. Kumi Yokoyama, a Japanese international, signed with the Spirit earlier this month, but it’s not known if allocation money was used to acquire her. Also signing their first National Women’s Soccer League contracts were Jenna Hellstrom and Jessie Scarpa.

Burke said that Yokoyama was a player that he was tracking. “She’s… a player that we’ve continued communication with, and when there was a strong indication that ours was the league that she wanted to come play in, then we didn’t really hesitate,” he said.

During the offseason, the NWSL made some changes to raise salaries and add additional funds for teams to attract and retain top talent. Washington is one of nine teams that has the opportunity to purchase up to $300,000 in allocation money to use on top of the salary cap ($650,000 in 2020). Also, the league has raised the maximum salary to $50,000 and the minimum salary to $20,000.

Burke said that all of the changes are going to be positive for the NWSL’s growth. However, he also mentioned that allocation money shouldn’t just be handed out to international players.

“There are some fantastic domestic players that also qualify to get some of that allocation money,” Burke said. “All it does for us — especially with an owner like Steve Baldwin — is give the opportunity to us to pay some players who have been really instrumental in raising our franchise’s profile last year and improving our standings, both on and off the field. Allocation money — I think the league and some of these clubs who’ve not been used to using it the way some that are experienced in MLS have done — it’s starting to open some more doors.”

Burke wasn’t shy to admit that he has Baldwin’s blessing to responsibly utilize the $300,000. And while Burke would not list any specific contracts and players that will receive allocation money, he indicated that the Spirit have already used some on their American talent — Andi Sullivan being the most likely player on the roster to fit both Burke’s description and the NWSL’s eligibility rules.

“We’ve jumped on it very quickly, but we haven’t exactly been gushing with our use of it,” Burke said of the extra roster funds. “We’ve been very restrained and some of it has actually gone to our domestic players who I think deserve it as well.”

While he is excited to use allocation money for the first time in NWSL history, Burke insists that Washington won’t be flashing money around to attract players. Burke said that, domestically, the United States has plenty of talent to dig up. His goal is to be balanced and strategic.

“There is plenty of depth and many quality players in this county,” Burke explained. “To bring an international in and pay above the odds for them, they have to be special. But I also don’t want to demean the players who have been in the league and in our football club who have helped us get to this level. The deserve recognition both financially, and, in every way… So we have to be cautious, we have to be intelligent and we have to be strategic. That’s what we’ve done this year.

Planning for the future

The NWSL College Draft will also be the second time Burke works to build the Spirit’s roster. In his own analysis, Burke said that Washington “won” the draft last year. This year, it’s a bit different for the Spirit, who have one pick in the third round and one pick in the fourth round.

Burke expects to work out a trade to move up the ladder.

“Our draft board looks a little bit scant right now because it’s third- and fourth-round [picks], but you can get some great players in the third and fourth round,” he said. “We’re going to try and move up the draft board in some way.”

No matter who Burke brings in, though, he wants them to latch onto the Washington Spirit’s growing identity. Last year, Burke said the team identified core values and the club’s culture. Burke produced a 1-12-month plan, and is now stepping into months 13-24 of the three-year plan.

“Our strategic plan for month 13 through 24 is taking shape. Our identity is in place,” Burke said. “We have a methodology and a style of play. We now need to find out principles, we need to change our roster. Many of the players that we brought into our roster are serial winners. They’re people who have been in programs that have won and are used to winning. That’s sort of a step that we’ve taken to encourage that mentality around our football club as well.”

Eventually, Burke said that months 25-36 will hopefully produce “a really good side.”

“My owner’s tasked me with becoming the best female football club in the world,” he said. “That’s an incremental process… That’s where we are going.”