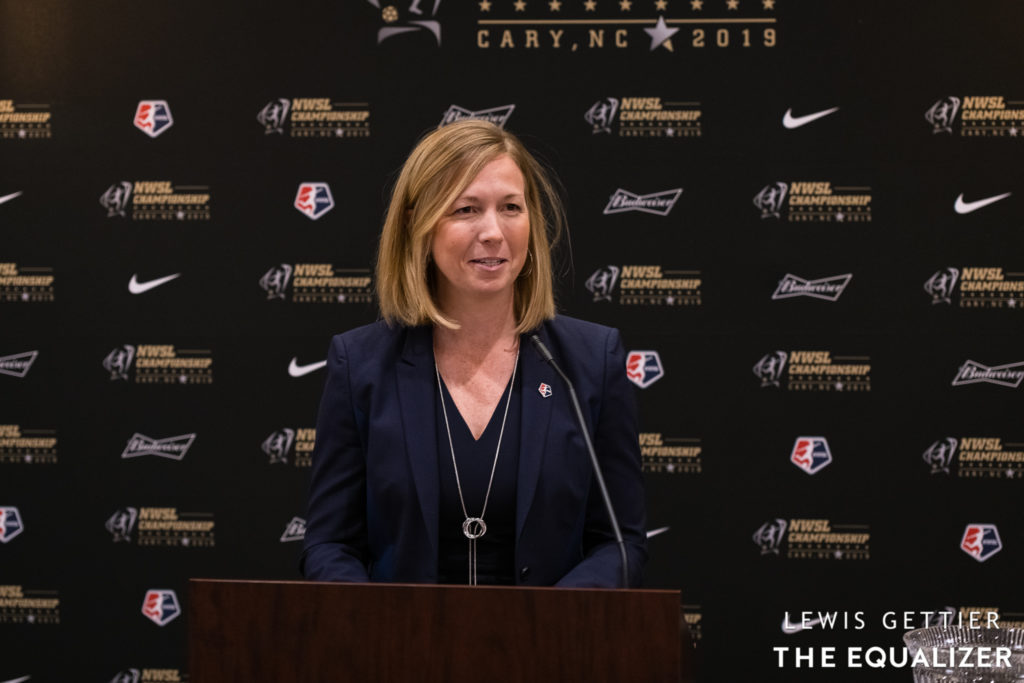 It appears that U.S. Soccer will remain in place as manager of the National Women’s Soccer League, after all.

NWSL president Amanda Duffy said on Thursday, during a press conference announcing the OL Groupe as new majority owners of Reign FC, that the relationship will continue at least through the 2020 season — a marked change of tone from earlier in the year when NWSL owners anticipated 2020 as the start of a new, more autonomous governance structure for the league.

“NWSL’s had a relationship with U.S. Soccer since the league’s inception in 2013,” Duffy said. “We’re on the fourth iteration of the management agreement, I believe it is — this one being a three-year management agreement that was set to expire at the end of this calendar year. There’s been some ongoing conversation, that remains ongoing, with what that relationship will move to. It was never intended for the relationship to just end, but it was more about an evolution of that and how the federation would continue to support NWSL.

“So, as we do look ahead, we do anticipate right now that the management agreement will continue for at least one more year, going into 2020. And that will allow the league, the owners, the time as we focus in on our new governing structure, our new operating structure and the investment that will be necessary to operate the league at the level that we all want it to and need it to, to be successful, for us to provide the resources to the teams and to the players. So, it’s an important relationship with U.S. Soccer, as is the relationship with Canada Soccer that we continue to have, and it’s an ongoing conversation but we do anticipate moving into 2020 in a formal management agreement relationship.”

U.S. Soccer has acted as manager of the NWSL since its inception in late 2012, funding the league’s small front office in addition to paying U.S. players for their participation in the league — which is a separate contractual obligation via the U.S. women’s national team’s collective bargaining agreement.

The Equalizer first reported in July that the agreement, which was initially instituted on a year-to-year basis, was expected to undergo significant changes heading into 2020 — a consensus expressed by people from both sides with knowledge of the situation. That feeling remained throughout early autumn, as discussions advanced, but the feeling has eroded recently as the federation and the NWSL failed to find common ground on what that autonomy would look like, exactly, and why U.S. Soccer would pay more money for a league it will have less control over.

NWSL owners have been asking the federation for an eight-figure investment over four to five years, but there remains disagreement within the league’s board room about just how much federation support is needed going forward. Some board members see a viable future with more independence; some view that as a distant reality. U.S. Soccer, meanwhile, has long been asking for a clear plan from the NWSL board about how money would be used. The Catch-22 of yesteryear remains: the NWSL wouldn’t exist without U.S. Soccer, but under U.S. Soccer’s purview, there’s a feeling that the league is being held back.

There is tangible evidence that advancements are being made in the NWSL. The approval of $300,000 per team in allocation money, as well as the impending arrival of Louisville for the 2021 season, clearly show that the uncertainty around the U.S. Soccer relationship isn’t holding everything up. But whether it’s expansion or the years-long search for a commissioner, there are action items that simply can’t get done without a clear idea first of who is in charge (a commissioner in the current U.S. Soccer-run setup, for example, wouldn’t have much power to actually enforce things) and what kind of future the league is headed toward.

So, it appears the federation will carry on as overlord for another year (at least), giving the league time to figure out exactly what it wants to look like. Increasingly, though, that vision needs to be made clear.

Want more high-quality reporting about the U.S. women’s national team, the NWSL and beyond? The Equalizer has led this charge for over a decade. Without reader support, we wouldn’t exist today. Subscribe to The Equalizer Extra and get ALL of our premium content — exclusive scoops and nuanced reporting, informed analysis and thoughtful, longform features among them — and support the advancement of women’s soccer media coverage. Check out all of our Extra stories here.