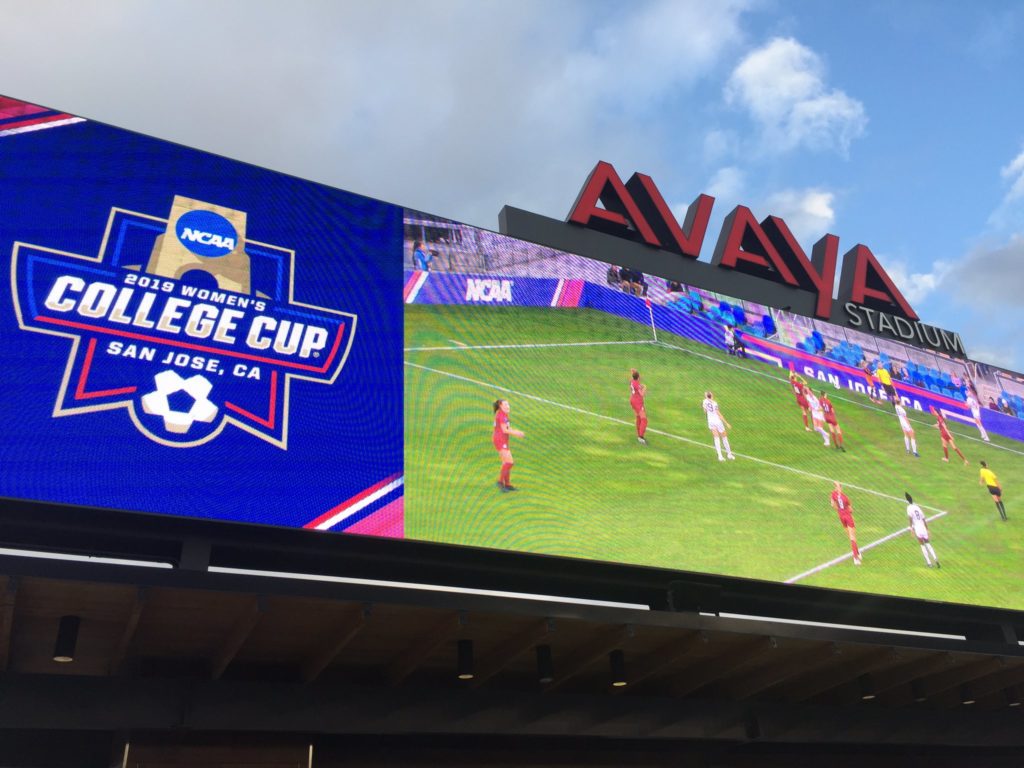 Cinderella story Washington State looked to outdo North Carolina at its own game in Friday afternoon’s first NCAA Division I semifinal in San Jose, California — at least the old version of the Tar Heels that produced perhaps the biggest dynasty in all of college team athletics.

North Carolina was (and in some ways, still is) notorious for winning by having not only the best athletes, but more of them, taking advantage of liberal substitution rules to use waves of players in eventually suffocating opponents.

To be fair, if it worked (which it clearly did), why change it? It took decades, but eventually the quality of play improved enough where at least the top teams could challenge UNC to the point where there was a chance they could be beaten on a semi-regular basis.

The Washington State Cougars pressured all over the field from the opening kickoff on Friday, playing three forwards and seeming to get the ball forward as soon as possible at every opportunity to take advantage of their numbers and athleticism. It paid off just seven minutes in as Morgan Weaver, whose professional stock might have been helped more than any other player in the NCAA Tournament, scored to put Washington State up 1-0.

Morgan Weaver finishes it to put the Cougs up 1-0 on North Carolina in the 7th minute.#WCollegeCup | @wsucougarsoccer pic.twitter.com/uJRrqggY7a

North Carolina was never truly able to gain total control in the contest, its back three under almost constant watch of a quick counterattack or tricky ball behind them, but the Tar Heels were not 23-1-1 coming in on a fluke, either. They equalized in the 24th minute — albeit slightly against the run of play — when another name that will likely be heard professionally somewhere soon, Alessia Russo (she does have one year of college eligibility remaining and is English), got on the end of a Taylor Otto flick to even the score.

The Tar Heels added a second, more aesthetically pleasing tally eight minutes before halftime when redshirt senior Ru Mucherera put on some moves down the left wing and sent a great cross in that freshman Alexis Strickland was happy to head home.

Neither team was able to score in the second half despite a still open game, although the Cougars had a couple of glorious chances miss the net. In the end, their strategy was sound; they outshot North Carolina 10-8 (shots on goal were even 4-4). But on this night, it just was not meant to be, as the Tar Heels advanced to their 27th national title game, although just their third in the last 10 years (they last won a national championship in 2012).

“I think they created more chances, and I think we were lucky — lucky to be in the final,” legendary UNC coach Anson Dorrance, who has been in charge from the beginning of the Tar Heels’ dominance, said after the game Friday.

Might a run like Washington State’s see a return to the “dark days” of direct play in the NCAA?

Stanford, not North Carolina, has really been the dominant college program in recent times, and  per usual — the Cardinal have had no trouble keeping the ball this season on their way to a 24-1 record, their only loss coming 1-0 to Pepperdine early in the season in a game that the Waves were outshot 22-3 and scored on their only shot on goal.

Stanford’s firepower and skill was on full display in the regional final last week when they blitzed previously unbeaten BYU, 5-1 (and outshot them 33-9 in the process).

Stanford had to deal with wet conditions and a soft Avaya Stadium pitch in the second semifinal, as well as a very good UCLA opponent that knows them very well (this year’s College Cup features three Pac-12 programs).

And the Bruins — as Washington State did — opened the scoring in the 7th minute.

Stanford’s response was quick and devastating. And probably predictable. It took all of two minutes for them to get their equalizer. By the end, the Cardinal were easy 4-1 winners behind a Sophia Smith hat trick, outshooting UCLA 25-7 and keeping the ball for what seemed like the entire second half. They will be fairly heavy favorites to win its second title in three years against North Carolina on Sunday.

This is not to take anything away from Washington State or future equivalents who come up with a strategy that works for the personnel they have and gives them the best chance to win the match, which is the ultimate objective, of course (at least at this level). Part of what makes the game great are the different ways to succeed, and with more than 300 Division I programs (and that number is growing), strategies are diverse.

And you need not look any further than the top professional league in this hemisphere, at least, to see how innovation comes in different shapes and sizes. Paul Riley’s ultra-aggressive 4-4-2 can sometimes look more like Dorrance’s old teams than many modern ones, yet the North Carolina Courage have the perfect players to fit what they want to do, are the have won both the National Women’s Soccer League Championship and Shield each of the past two seasons.

As most of you reading this are probably well aware, athleticism and fitness were two of the biggest factors in the United States being the dominant force in women’s soccer. After some growing pains that saw them fail to win in three consecutive World Cups (2003, 2007 and 2011), they have adjusted and won the last two with a mixture of the old and the new, able to hold the ball when they need to, although they did not have as much possession as England (semifinal) or France (quarterfinal) despite beating both in the knockout round.

So, the bottom line, as with most things in life, is for you to be you, no matter what you might be.

For Sunday, however (although it would not be a huge shock if UNC wins another title), I would rather be Stanford than North Carolina.