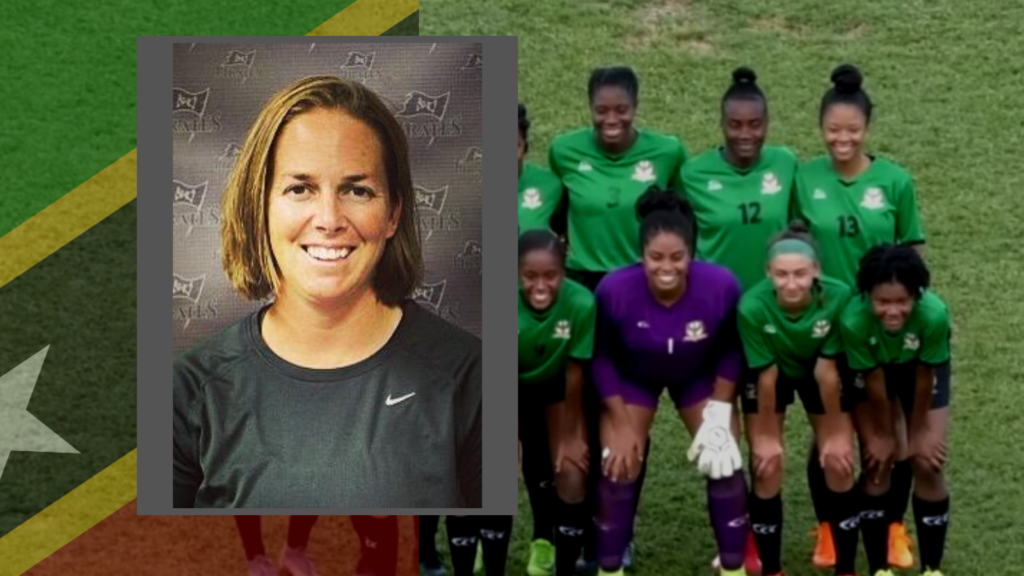 Saint Kitts and Nevis was a huge surprise to advance out of the Caribbean region to the Concacaf final-round qualifiers for the 2020 Olympic Games. The island nation has a total population of about 57,000 and is the smallest independent state in the Western Hemisphere, but in January its women’s soccer team will compete against larger programs like Canada and Mexico.

The Equalizer recently spoke with the side’s head coach, American Jené Baclawski. She is a part-time coach to the Saint Kitts and Nevis federation, a full-time technical director for the South Texas Youth Soccer Association and has a USSF A Coaching License. She is working on a doctorate in education from the University of North Carolina-Greensboro to go with her Ph.D. from the University of Georgia in Sports Studies. She played collegiately at Queens University in Charlotte. She is also a U.S. Soccer Federation instructor for coaching license courses, of which only a few are female.

Baclawski explained how she came to her current part-time head coaching role with Saint Kitts and Nevis, through a negotiation process that started in late 2018, saying that she and the federation officials, “went back and forth. The St. Kitts and Nevis [Football] Federation is incredibly focused on improving the women’s and girl’s side of the game and knew that they wanted to bring in a female role model. The federation does not have the budget to have an exact match of the structure that they have for the men’s program. They wanted to bring in someone to help provide direction and improve the women’s side of the game, [to] help not just for the top senior team but for all the women, [including] youth program direction.”

Incredibly, Baclawski first met her players only six days before the CFU regional qualifying tournament group stage in Trinidad and Tobago in October. There, Saint Kitts and Nevis emerged atop the five-team Group A thanks to a stunning 4-1 victory over hosts Trinidad and Tobago. The Sugar Girlz, as Saint Kitts and Nevis’ women’s side is known locally, will join 2019 World Cup entrants Jamaica and 2018 U-20 World Cup participants Haiti as Caribbean representatives in the final stage of Concacaf qualifying. Two of the eight teams will advance to the 2020 Olympics in Tokyo.

Baclawski said that in the crucial win over Trinidad and Tobago on Oct. 6, she knew before the game that the side would do well.

“I was surprised that our federation had never beaten Trinidad before,” she said. “It was surprisingly easy to motivate them for that game because of what had happened in the first qualification round for the World Cup over a year ago.”

St. Kitts and Nevis were tied on points entering the World Cup qualification game on May 25, 2018 and Trinidad and Tobago cancelled out St. Kitts and Nevis’ lead in the 89th minute, ultimately knocking them out of the next round on goal difference. T&T earned the ticket to the final round of regional World Cup Qualifying in Jamaica.

Baclawski chuckled when recalling how ready her players were for the rematch with Trinidad and Tobago in Olympic qualifying in October.

“They were hungry and focused, and they remembered every single moment of that game a year and a half ago and could recount it to me in detail,’ the Saint Kitts and Nevis coach said. “I don’t think Trinidad knew what was coming. That was the easiest game to prepare them for because they were ready, they wanted revenge…As soon as I saw them step out on the field for warmups, I knew we were going to have a good game; there was no nervousness, they were ready to go at it.”

Saint Kitts and Nevis built a 3-0 halftime lead and though T&T had some dangerous attacks in the second half, the visitors were firmly in control and finished with a 4-1 victory.

Ahead of the final round of Olympic Games qualification from Jan. 28 to Feb. 9 in Carson, California, and Houston and Edinburg, Texas, her plans are to continue to identify the player pool for a December camp, which will include the U-20s who have advanced to the round of 16 next February from a preliminary qualifying group last July, going undefeated against Grenada, Barbados, Anguilla and St. Vincent and the Grenadines. Having the two groups together will allow her to, “see players and work with the staff to make sure we are aligned going forward and then do the same thing for the U-17’s and U-14’s.”

Baclawski explained that about half of her players come from the island and half from abroad for a 50-50 balance. Saint Kitts and Nevis is led by American-born Phoenetia Browne, who played this season with Aland United in Finland after lining up with Olimpia Cluj in Romania the previous season. She grew up in the Bronx in New York and played at Columbia University, where she completed her bachelors’ degree, and then finished her college soccer career at the University of Texas, where she completed a masters’ degree in civil engineering. Browne played for New Jersey Copa in the first year of UWS in 2016 and made the league championship final before heading to Europe.

International teammate Brittney Lawrence was raised in Canada and now plays with Skoftebyns IF in Sweden. Ellie Stokes is a teenager who was born and raised in the United States and plays for Baltimore Armour U-17, while two other teenagers, Cloey and Kayla Uddenberg, were born in Canada and play youth ball with the Aurora Soccer Club in Ontario.

Baclawski said that she was surprised to find that her team was quite unbalanced in terms of age, with many U-20s.

“Kayla Uddenberg started the Trinidad game and played significant minutes against Antigua as well,” Baclawski said. “You can just image she is under 15 and having an impact. That was probably the more striking deficiency was how many players were actually under 20; that actually bodes well when you think of the strength of Saint Kitt’s U-20 and younger players and that makes me most excited.”

Saint Kitts and Nevis can certainly look forward to building off of a rich generation of young players, much as Haiti has done in recent years, but they will likely struggle in the final round of Concacaf qualifiers.

The team’s success in Trinidad received some publicity at home, but none so far from the international media.

“My role is short-term to help the team to perform,” Baclawski said. “The structure of players currently there and the women’s program, it is marketing, [to] get the federation to focus on the team. When they came back [from Trinidad], it was one of the first times that the team was recognized, at the men’s Nations League [home] game on the field, news stories and people at the airport—that alone will help the game to be more popular for girls there and garner more respect and attention to development.”

In spite of the lack of media attention, player agents have reached out to some of the team members to find clubs for them, particularly in Europe.

“We had several players contacted by agents, since we went on from this round of qualification, to play professionally, Baclawski said. “The impact that’s going to have for these players to play at the next stage of qualification, it will improve their experience but also the overall visibility for not just Saint Kitts but for all of the Caribbean teams… maybe they get the experience to go abroad.”

The exact same thing happened during Jamaica’s run to the 2019 Women’s World Cup, albeit Reggae Girlz head coach Hue Menzies was actively encouraging his players to go abroad if they were out of college.

Another goal for Baclawski is on the coaching side to support the growth of local coaches. She said that she does not envision her position to last indefinitely.

“It’s not a long-term position for me and it shouldn’t be if I do my job right,” she said. “We can support on the coaches’ education side, in helping them be exposed to new ways of training or new game strategies and tactics so they can grow their own knowledge of the game… Someone from Saint Kitts should have the full-time position that I can find, that I can help mentor to take over [from me].”

She concluded with her hopes for the final round of Olympic qualifying, “I don’t know how the next round will go. We will have good experience, we will learn some great things and we will represent the Caribbean and Concacaf well, but the goal for us is much greater and longer term than just February. We’re looking at what can happen four years from now if I’m able to come in and help and we do things the right way. Could we be potentially qualifying for the next World Cup? That’s really where we want to go with it, and I think it’s very feasible as well when you think of the young players that we have.”

Saint Kitts and Nevis will face stiff competition in Canada, Mexico and Jamaica in their first-round group. Beyond performances on the field in the U.S. early in 2020, the true success of this campaign for Baclawski and her team will be how the federation supports the women’s team moving ahead at all levels, and if they grow into a regional force in the years to come.