Dawn Scott bids emotional farewell after decade with USWNT: ‘For me, it’s all about opportunity’ 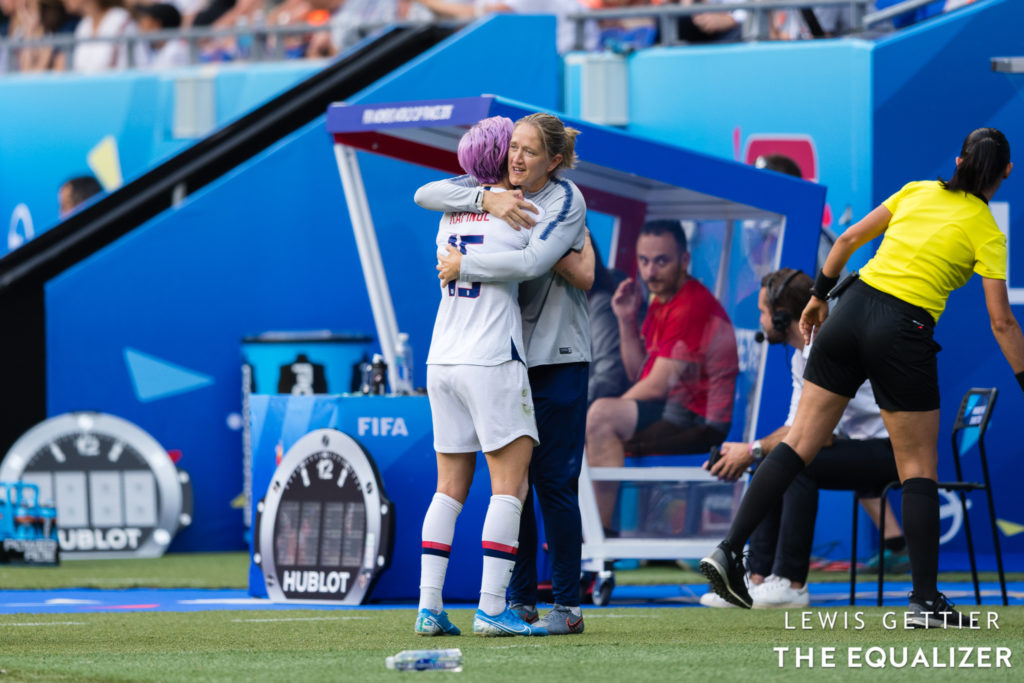 One day before the United States women’s national team won a second consecutive World Cup, on a warm July evening in Lyon, Dawn Scott delivered notes to her colleagues. Not one note for everyone, but 58 individualized notes — one for each player and staff member.

Scott’s 10 years as the team’s trusted leader for all things strength and fitness give her unparalleled insight into what makes each player tick. Some players were competing in their third straight World Cup final; some players were in their first and experienced an expected level of nervousness. Each player requires something slightly different, Scott has learned, whether it comes in the form of a note or the flavor of a recovery smoothie. In a sports landscape inundated by data, Scott knows that information is only valuable if its interpreted and applied with a purpose.

“I think sometimes, with sports science, we get caught up with data or spreadsheets or performance profiles and things like that,” Scott told The Equalizer. “I think one of my strengths is relationships with players that almost determine what a player needs in terms of how they need to be communicated to or what, why, how and when to say something to them.”

Those relationships are what make this next part so hard for Scott. In November, she decided to leave her post as high-performance coach of the U.S. women’s national team to take on the role of senior women’s physical performance manager with England, her native country and a rival of the United States.

News of Scott’s job change was met with surprise by many. She had worked with the U.S. through three successful coaching regimes — winning two World Cups and an Olympic gold medal — and newly appointed U.S. coach Vlatko Andonovski said he wanted to keep Scott on his staff, but that decision was ultimately out of his hands.

“For me, it’s all about opportunity,” Scott said. “The opportunity for that wider role was available, and that was a big pull for me — for my own personal development, at this stage of my career, I want to grow and develop more as a manager and a leader.” 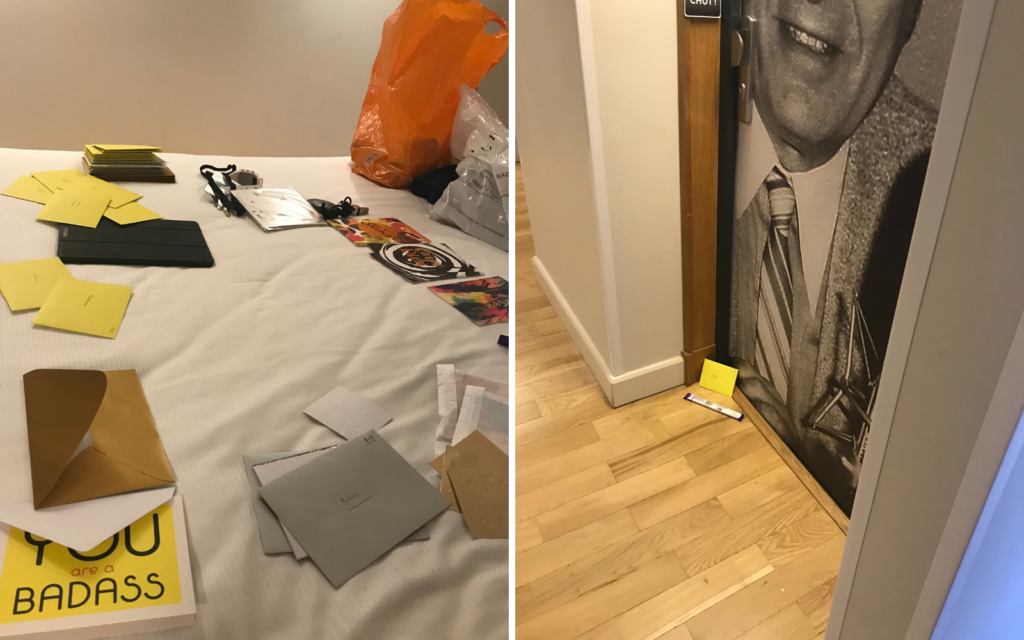 Dawn Scott made notes for all players and staff on the eve of the 2019 World Cup final.

Scott begins her new job with the FA this month, trading the Los Angeles sunshine for England’s gloomy winter. With England, she’ll work with current staff in place to develop “vertical integration of all things physical performance across the whole pathway,” which means working with youth national teams and streamlining communication with clubs of English players (most of whom play at home, in the Women’s Super League, much like U.S. World Cup players all currently play in the National Women’s Soccer League).

England head coach Phil Neville and Baroness Sue Campbell, the FA’s head of women’s football, were instrumental in acquiring Scott, but the appeal of coming home also appealed to the England native. Scott worked for the FA for nine years prior to joining U.S. Soccer in 2010.

Women’s soccer in England was a semi-professional shell of its current self in that era; the WSL was founded a month after Scott joined U.S. Soccer. Today, it’s among the best league’s in the world, a debate which has gathered more steam following the arrival of Sam Kerr to Chelsea and comments from her new coach, Emma Hayes.

“The other piece for me is, it’s my home country,” Scott said of her decision. “To go back at a point when they are now professional, and they are supported in that way, it’s also an exciting time to go back again with some of those players.”

Scott expects to be part of Great Britain’s Olympic team in 2020 (a team expected to feature mostly English players) and, like much of the English staff, has the calendar circled for the 2021 European Championship, which will take place on home soil. Her first matches with the senior team will be in March at the SheBelieves Cup — on U.S. soil.

Such is the often-comedic irony of sports. Scott will debut in her new role with England in the very place she just left, in a tournament against a team with whom she often spent some 150 nights per year on the road.

Memories with the U.S. “will last a lifetime,” she said, from the early days of veteran leaders Abby Wambach and Christie Rampone — who at the 2015 World Cup told this reporter that Scott was “the secret to everything” — legitimizing Scott’s work to the rest of the team, to the recent development of players like Rose Lavelle and Lindsey Horan. “They’ve been my life and my family for that time. So, yes, that’s the hardest part,” Scott says. The feeling is largely mutual among players.

Too many words to say. You’re the best of the best. We will miss you so much!!!! Love you mother ❤️ pic.twitter.com/FWuuZPww2g

There’s a different story for every player, and with each, Scott took a personal approach. That meant shepherding a young Horan when she was on her own in Los Angeles for days of fitness tests. It meant working with Heather O’Reilly as she broke her own records on the infamous beep test. And it meant witnessing the most important moments that nobody outside the team ever saw, but ones which were as critical as any to the United States’ dominant decade.

“One of the highlights of my World Cup was the day before the World Cup final, when [Megan] Rapinoe and Rose were trying to make the final on the back of respective hamstring injuries, and we were like, ‘Ok, well the day before, we’ve got to test max speed,’” Scott said. “Because we don’t want to have not done that and then you go to the final and then you break down straight when you have to max sprint in a game. So, we did that whole warm-up piece and they both looked at me and I was like, we’ve got the live GPS system, so we know their speed straight away. They both looked at each other and sprinted across the field. They both hit close to their top speed and then they turned around and gave the thumbs up and jogged off into the rest of practice. That, for me, was one of the highlights of the World Cup. We’ve got them available for the final.”

Each player scored in the final, Rapinoe on a penalty kick which sealed her the Golden Boot and Golden Ball, and Lavelle in an iconic goal from open play which cemented her as the breakout star of the tournament. 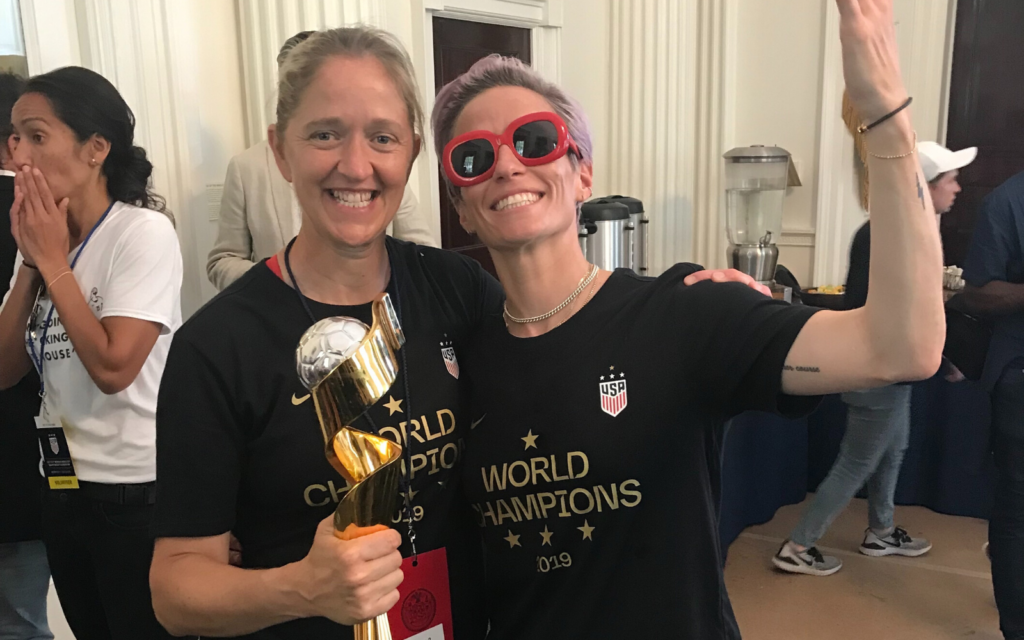 Scott has long talked about “incremental gains,” a process of evaluating every element of a player’s physical performance and determining how to accumulate gains from making changes in each area. “You always wonder, what was the golden nugget that made you successful?” she asked rhetorically. Her answer is to examine everything, from nutrition to hydration and sleep.

Among Scott’s more noted breakthroughs was one that first required her to simply get players to talk about it. U.S. Soccer garnered international acclaim at the 2019 World Cup for its management of each player’s menstrual cycle, leveraging new technology and research to better predict dips in energy, recovery rates, sleep and performance — and the potential link to increased proneness to injury. Enlisting the expertise of Dr. Georgie Bruinvels, a guru in the menstrual cycle and elite athlete research field, they developed an extensive education and monitoring program tailored to each individual player.

Theories exist, Scott says, that there might be a connection between the high rate of ACL tears among women’s soccer players and the early stages of the menstrual cycle. But there still isn’t enough research around the topic — and that wider void is where Scott sees an opportunity to give back. Right now, she says, there’s a lot of taking research from the men’s game and applying it to women’s soccer, but increased resources in the women’s game should lead to more specific research on female players.

NWSL teams, so often strapped for resources, last preseason received educational workshops around the impact of the menstrual cycle on their physical performance. That was in addition to the usual standardized fitness testing and data collecting, a link between club and country which, on the night after the U.S. won the 2015 World Cup, Scott convinced longtime U.S. Soccer executive Jay Berhalter (who was chief commercial director at the time) was necessary for the advancement of the program. 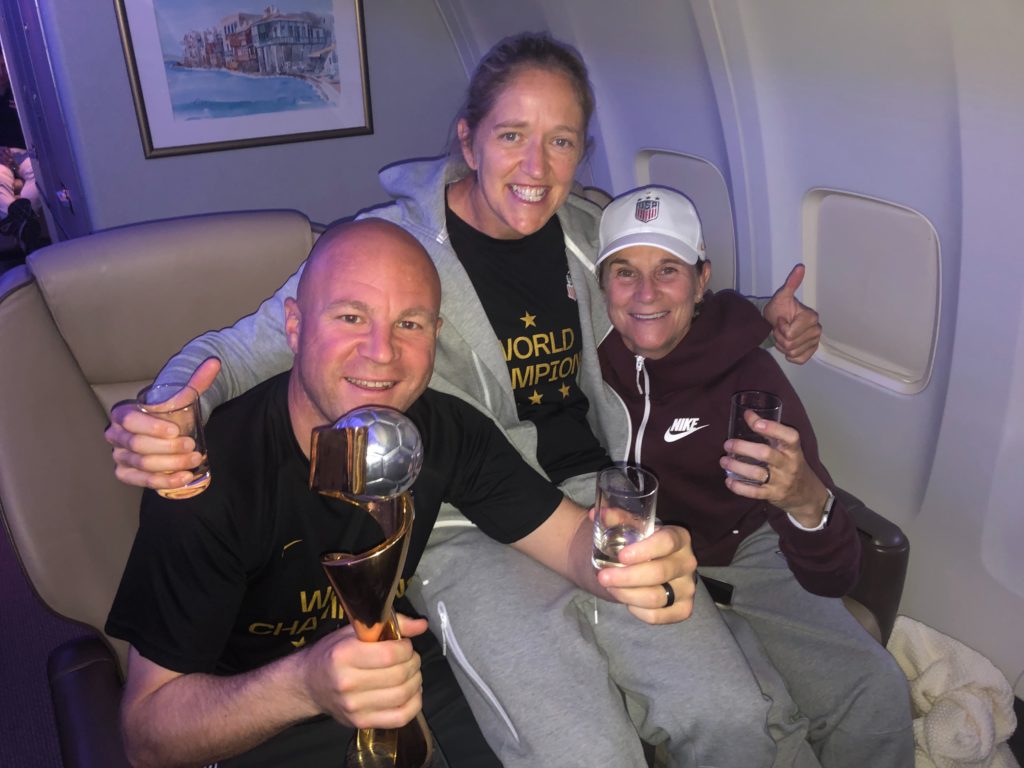 Scott’s absence from the U.S. program will absolutely be felt, but work will carry on. U.S. Soccer has an entire high-performance department, including dedicated resources for the NWSL specifically, and others are stepping up internally to fill the sudden void, new U.S. women’s national team manager Kate Markgraf told The Equalizer. Still, replacing such a longtime staff member who had earned the trust of players — in a way head coaches could not, given the dynamics of the roles — is a tall order.

“Dawn’s work was incredible. Dawn pushed this team,” Markgraf said. “To me, she single-handedly won big tournaments, especially 2012… It was incredible what she was able to do, pushing these players in a healthy way.”

England is the beneficiary of the somewhat surprising news. The WSL presents different challenges as a more traditional league of individual clubs with their own technology and beliefs (rather than the single-entity setup of the NWSL). In many ways, however, Scott’s end goals will be similar — albeit in a different shade of red, white and a touch of blue, much to the chagrin of U.S. fans. Research and research some more. Pore over the data. Find areas which could be improved. Foster relationships. Customize the approach. Make incremental gains.

This is what drives Dawn Scott. She feels a duty to spread some of her work to others so that the women’s game can grow globally. She’s excited about where the women’s game is headed with increased funding and professionalism. She’s inspired by the impact players like Rapinoe are creating on and off the field. And she sees her move back to England as another step in that process.