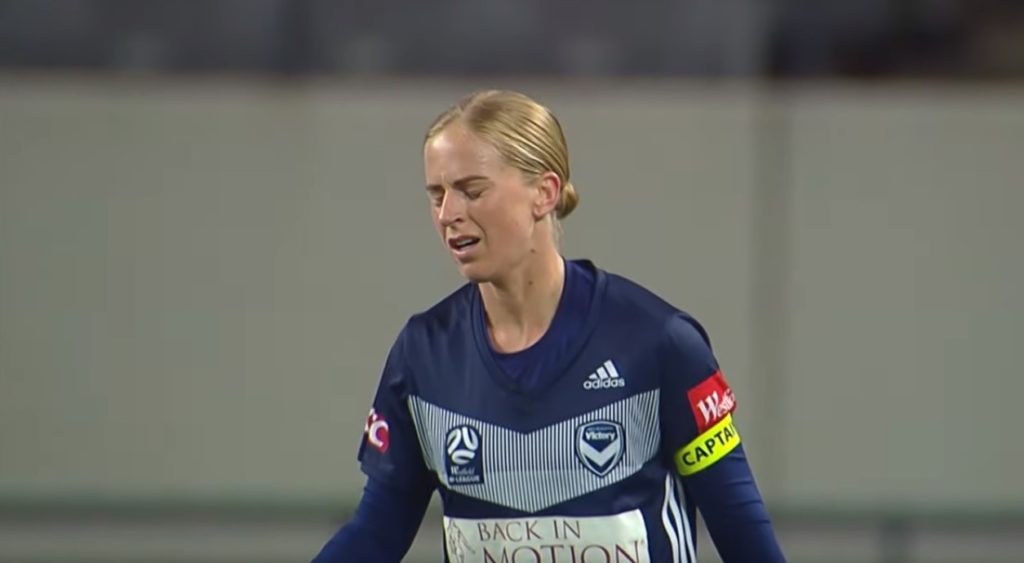 North Carolina Courage loanee Kristen Hamilton scored the first-ever hat trick for the Western Sydney Wanderers in their 3-1 away win over the Brisbane Roar on Nov. 28, leading her side to the top of the table for the first time in the club’s eight years in the W-League (tied for first after Sydney FC’s 3-1 win in Perth three days later).

Hamilton scored two first-half goals and then scored a stunning long-range blast past Matildas and Roar keeper Mackenzie Arnold in the 63rd minute, after a sublime back-pass from Australian youth international Kyra Cooney-Cross, to seal the game. Hamilton now has four goals in three games and is tied with Remy Siemsen of Sydney FC for the league lead in individual scoring.

The best way for @khamilton17 to cap her 💯th senior appearance. pic.twitter.com/DJGUI7KikQ

It was definitely a team effort for the Wanderers as Courage teammate Lynn Williams assisted Hamilton on two goals and threatened the Roar goal all night, while Sam Stabb (Washington Spirit) provided the opening for the second goal from a long throw-in. Wanderers goalkeeper Abby Smith (Utah Royals) also faced some tough shots from the Roar who never gave up in the match. Carson Pickett (Orlando Pride) was outstanding for the Roar and their one goal came from her cross to fellow American Rylee Baisden, who played at Pepperdine University.

Elise Thorsnes, the Norwegian international and former Utah Royals player, buried a low shot in the 81st minute as she broke in alone on goalkeeper Claire Coelho after a tremendous 45-yard pass from Karly Roestbakken out of defense, after she stopped an opposing attack, to give Canberra a 3-2 victory over a resilient Newcastle Jets side in front of 3,446 fans for the first match of an A-League doubleheader on Nov. 30 in Newcastle. Thorsnes now has seven goals in 10 W-League matches for Canberra, having played with the club in the 2017/18 season. The Jets are the only W-League side not to bring in any imports this season.

💨💨💨 Can anyone in the Westfield #WLeague catch Thorsnes when she's turned on the burners?

Kristen Hamilton’s third goal against Roar was also a strong consideration for goal of the week (see above).

Sarah Willacy was outstanding in Adelaide United’s 1-0 away loss to Melbourne City on Nov. 30. She had two remarkable saves against Claire Emslie (Orlando Pride) in the 32nd minute and the 65th minute — the latter for which Willacy flew into the air to make a one-handed clearance of a ball that was headed to the top corner behind her — to keep her side in the game after an early goal from Australian international forward Kyah Simon. Amber Brooks (Houston Dash) had a tying goal ruled out for offsides early in the second half. City now is third in the table and still undefeated while Adelaide is somewhat unfortunate to have no points after three games, after losing their opening match to Western Sydney Wanderers 2-1 on a last-second goal and coming close to sharing the points against City.

The @AdelaideUnited stopper wins Round 3's Westfield #WLeague Save of the Round for this 😍 pic.twitter.com/DF4PY8WqGn

North Carolina Courage loanee Lynn Williams has been impressive in her two matches with Western Sydney, despite not scoring a goal. She has been very impressive in attack for the Wanderers and her strong partnership in the States with Hamilton has been apparent throughout the games, as the Wanderers are tied with Canberra for the second most team goals so far this season (six), one behind Sydney FC.

In the first matches, on Nov. 26, Melbourne Victory fell 4-0 to Incheon Hyundai Steel. Incheon Hyundai Steel scored the first goal of the game through Kim Dam-bi in the 24th minute and then added a second by Brazilian international Thais Duarte Guedes in the 33rd minute. Guedes joined the club in 2013, along with compatriot Beatriz Zaneratto Joao, who has played in the last three Women’s World Cups.

After the halftime break, Lee Se-eun scored twice within a minute by the 58th minute to effectively kill off the match on a very cold evening. Grace Maher, who played this summer in Iceland, had the best chance of the evening for Melbourne in second-half injury time, forcing a nice tip-save from the Korea Republic keeper. The Incheon side won their seventh consecutive Korean women’s league title last month.

In the opening match of the tournament on Nov. 26, Nippon TV Beleza and Jiangsu Suning tied 1-1. Tabitha Chawinga, who is a Malawian international and played previously at Kvarnsvedens IK in Sweden — leading the Elitettan (second division) in goals with 43 in 2015 and then the Damallsvenskan with 26 in 2017 — scored in the 7th minute, but Japanese international Mjna Tanaka (who was the league MVP the last two seasons but was not part of Japan’s 2019 Women’s World Cup side) tied up the match three minutes later for the Japanese champions.

Nippon TV started the match with 11 current or former senior internationals. Nippon TV has won five league titles in a row and 15 overall. Jiangsu won its second title by 8 points this season under French coach Jocelyn Precheur, who coached at Paris FC with the youth sides for a short time in 2017 after almost three seasons as the video analyst for the women’s team at Olympique Lyonnais; he is best known for starting and running the Juvisy Youth Academy in France. Jiangsu won four titles this season at home: the league, FA Cup, FA Tournament Champions and Super Cup. Another one of their African imports is known to NWSL followers; Elizabeth Addo played in 2018 with the Seattle Reign and this season had five goals and 10 assists in 14 matches in her first season in China.

In the second set of matches on Nov. 28, Melbourne Victory and Jiangsu tied 1-1, with Maher scoring for the Australian side in the 11th minute and Chinese international Tang Jiali replying shortly thereafter. Jiangsu dominated the proceedings most of the way but couldn’t score a second goal, thus finishing with their second deadlock in two matches in the tournament. Japan’s Nippon TV Beleza defeated Incheon Hyundai Steel Red Angels 2-0 with goals from Riko Ueki and Rikako Kobayashi — the latter on Japan’s Women’s World Cup roster in France this summer — to move into the tournament lead with 4 points.

On Nov. 30, Beleza won the tournament championship and finished undefeated in three games (7 points) after dispatching Melbourne Victory (1 point) with a 5-0 win as Mjna Tanaka scored a hat trick.

Victory head coach Jeff Hopkins said after the match, “I’m very disappointed, but I want to congratulate the Japanese side. They’re a very, very good side. Technically excellent, great movement and, as you saw with the score line, they caused us a huge amount of problems today. It’s a learning process for us. We want to get better and sometimes you have to take a few hard hits before you can turn things around.”

Hopkins’ assessment of the technical difference that his side encountered against the Japanese side really applied to all three of their matches against the Northern Asian league champions. Melbourne must put their disappointing showing behind them as they return to W-League play next week at home to the high-flying Western Sydney Wanderers. This first Asian Club Championship did show that the W-League’s general style of play lacked the calm and precise passing, particularly in front of goal, of specifically the Korean and Japanese sides.

Tabitha Chawinga scored a brace for Jiangsu Suning in a 2-0 win over Incheon, to give the Chinese side second place on 5 points, to 4 points for the club from the host Korea Republic. Chawinga’s second goal was assisted by Addo.

Raso returns from wrist injury to play against Western Sydney

Hayley Raso (Portland Thorns) started for the Roar in the match against Western Sydney, albeit wearing a soft cast on her left arm. She substituted out in the 66th minute for central attacker Allira Toby, but the fact that she played at all was quite heartening, after she used most of the last W-League season to recover from a broken back she suffered at the end of the 2018 NWSL season.

At the end of the Roar’s first match of this season against the Victory, Raso collided with Roar defender Angela Beard as both chased the ball in the last few minutes of the match. Beard inadvertently stepped on Raso’s left arm and she screamed in pain; it was really hard to watch live as it happened. Beard immediately came over to check on Raso, who had to leave the game in clear pain. Beard, an Australian U-17 and U-20 international, is in her third season in the blue of Melbourne Victory, after playing three seasons with the Roar. 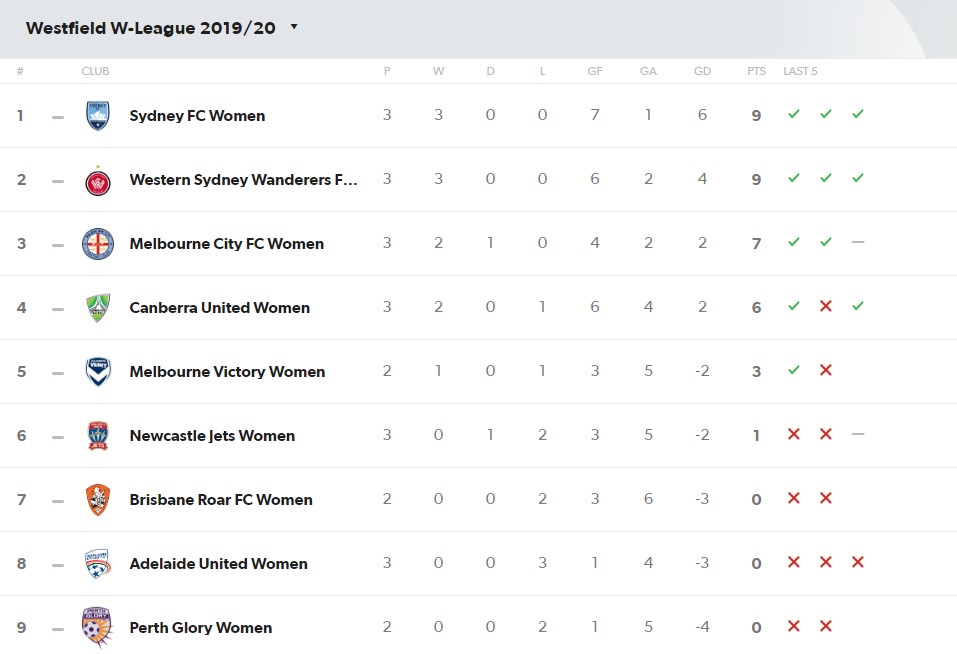