It wouldn’t be a College Cup without North Carolina 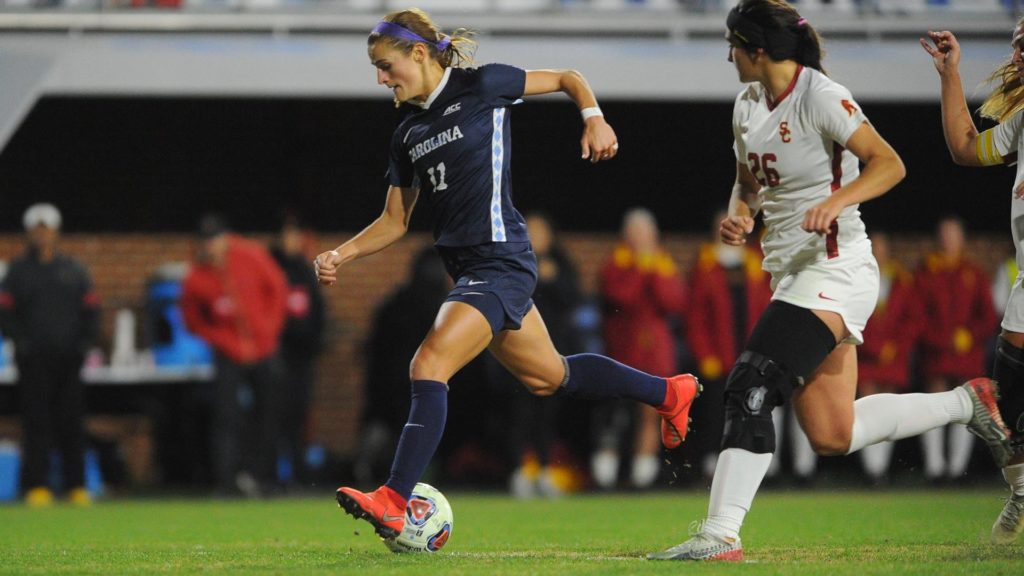 CHAPEL HILL, N.C. — Anson Dorrance hates quarterfinals. Lose in the quarterfinal round and your season comes crashing down just before the fun stuff starts. It’s a terrible way to end a good year.

And Dorrance’s University of North Carolina Tar Heels are having a good season — a very good season. His team was 22-1-1 heading into Friday’s quarterfinal matchup with 17-4-4 University of Southern California. The Tar Heels advanced to the round Dorrance hates with a convincing 4-0 win over Michigan.

The game against USC was the 31st quarterfinal of Dorrance’s career and played on a field named after him. The Heels had already advanced to the semifinals 28 times, losing in 2013 to UCLA and eliminated in penalties by Florida State in 2005.

As Friday’s game played out, Dorrance was reminded of the reasons he can’t stand the round of eight. The Heels survived, though, beating the Trojans 3-2 on a header by freshman Maycee Bell with just under 22 minutes to play.

“I’m thrilled to have survived semi-alive,” said Dorrance. “Full credit to USC. They certainly gave us all we could handle. They had a lot of the play, especially in the second half. I’m just excited we are advancing.”

North Carolina opened the game strong and were the obvious aggressors in the first 20 minutes. But it was the Trojans that struck first. On a perfectly executed counterattack, Penelope Hocking scored her 18th goal of the season to give USC a 1-0 lead with 16 minutes remaining in the first half.

A remarkable individual effort by UNC’s Emily Fox evened the game 10 minutes later. Fox got the ball 40 yards from the USC goal and dribbled into the penalty area, leaving five Trojans behind, and rolled it into the near corner to tie it 1-1.

“She took on the whole team for that first goal and she is just an amazing player,” said Bell.

That, however, was Emily Fox’s last contribution. Seven minutes into the second half, Fox, challenged by Hocking, tried to shield a ball over the end line for a goal kick. The two collided awkwardly and Fox stayed down.

“When we saw that she had to be carried off, we knew she wasn’t coming back into the game,” said UNC forward Izzy Cox. “We all just looked at each other and said, ‘This is for Emily Fox.’ She was the reason we got back into the game. She is a great player and she always works so hard. We wanted to win for her.”

Fox’s status was unknown after the game. Earlier this week, Fox was announced as one of 24 players invited to head coach Vlatko Andonovski’s United States women’s national team identification camp in December.

“Obviously, I’m devastated for Emily Fox, who put us back into the game with her great run and goal,” said Dorrance. “It was hard for our trainer to diagnose. It’s very hard to test at this point. Our hearts go out to her. Obviously, we are hoping she’s okay.”

Brianna Pinto gave North Carolina a 2-1 lead a minute after Fox was carried off. But the Trojans tied it up again when Natalie Jacobs redirected a shot by Jalen Woodward with 28 minutes left.

Bell’s header in the 78th minute won the game, and Dorrance survived another quarterfinal.

“Usually, we don’t give up this many goals,” he said. “But to have our kids come back and keep coming back to try to win this thing is certainly to their credit. The game is about the players and the players took over. There’s nothing that can come from the sideline at that point. The game-changers were changing the game. We have a lot of different players who can step up and they did.

“The memory of us falling one goal short last year gave us motivation,” said Dorrance of the 1-0 NCAA final lost to Florida State last year.

With the quarterfinal hurdle cleared for another year, the Tar Heels will take on underdogs Washington State in the semifinals in San Jose, California on Friday. Stanford will play UCLA in the other semifinal.

“It will be a lot more relaxing than today was,” said Dorrance. “For me, getting to the final four is everything. That’s where it’s all happening. If you can go to the final four, regardless of what happens there, it’s a very successful season.”