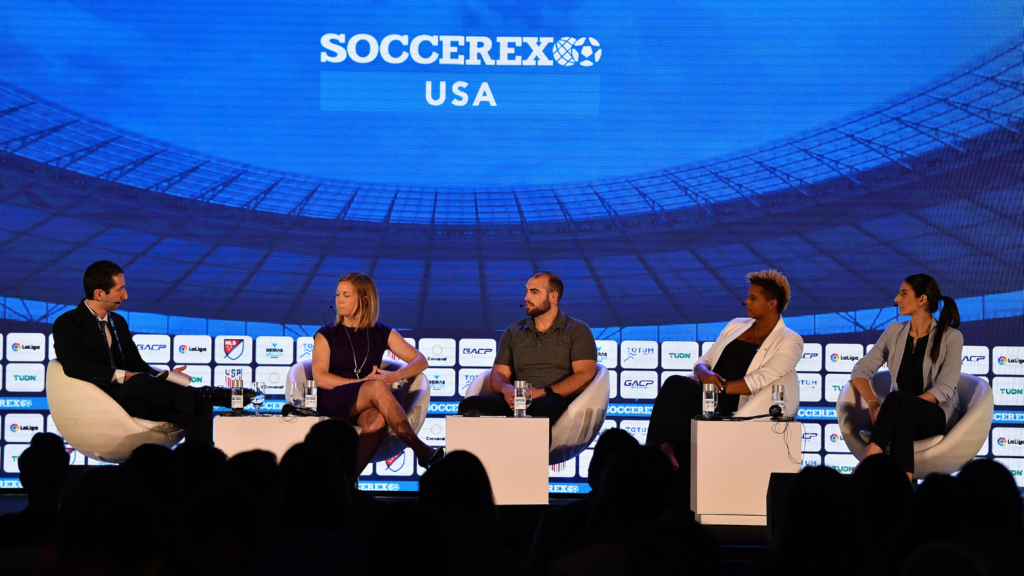 MIAMI — Last year, here at Soccerex USA, discussion around women’s soccer had an underlying tone of hope. The 2019 Women’s World Cup was around the corner and there was a collective feeling that a significant moment was ahead.

Of course, there was no guarantee that things were going to go as planned in France.

What played out was a largely successful tournament by almost any metric — over one million in aggregate attendance and over 1 billion worldwide viewers, according to FIFA — and the wave that hit from that tournament has carried over into domestic leagues and national team programs worldwide. We’re seeing a movement — one still with significant challenges, to be clear, but a turning point, nonetheless.

So, the question we addressed one year later, here at Soccerex USA 2019 was, what now?

This was another massive World Cup year, and history has shown that there’s a drop-off in interest to follow. How do we take this success the sport is witnessing now and harness it toward the future? What does sustained success look like? And what are the biggest challenges which remain?

The full video replay of the panel will be released in the coming week. Here are some highlights from the talk as we wrap up another successful Soccerex USA in Miami:

— From a business perspective, there’s a lot of interest in what Budweiser is doing with the NWSL and in helping the league find more partnerships with even more brands. Barnes shared that the company’s “Won’t Stop Watching” campaign was a massive success, drawing more engagement than even Super Bowl advertising campaigns for the company. A theme of both that campaign and our panel is the need for authenticity. More needs to be done, and Budweiser isn’t immune to that. Their advertising position acknowledges that they were part of that problem and now they are part of the solution.

— To that point, Duffy spoke about the need to better engage the young adult demographic — the fans who want to come to games and have a great, grown-up experience. LeBlanc and Averbuch chimed in about the need for a balance between appealing to young fans and adult fans.

— Averbuch stressed that there’s not only a disparity between men’s and women’s players right now, but a disparity within the women’s game. The realities of the U.S. women’s national team players are much different from those of NWSL players making minimum salary. Some league players are juggling jobs outside of playing soccer. That’s why recent improvements to not only salaries but housing standards are so crucial.

Q: What is your point of view on equal pay between men and women in football?@Yael_Averbuch weighs in.#SoccerexUSA pic.twitter.com/8T88hGNWTI

— LeBlanc discussed how Concacaf plans to move forward in 2020, with dedicated women’s initiatives across member associations as well as a host of tournaments: Olympic qualifying at the senior level as well as regional championships at the U-20, U-17 and U-15 levels. Concacaf is the only confederation with a U-15 championship, she said.

— Toward the end, we answered some questions from observers, including the topic of improving youth landscape.

Obviously, 45 minutes isn’t enough time to dive into some of the deeper nuances of opportunities and challenges facing the women’s game. The high-level topics we addressed are one touch point in a complicated, ongoing conversation and progression of the women’s game. We’ll all continue to do our part to advance that conversation.

Check back next week for the full event replay.