The Lowdown: Sky Blue’s move and the big picture on NWSL attendance 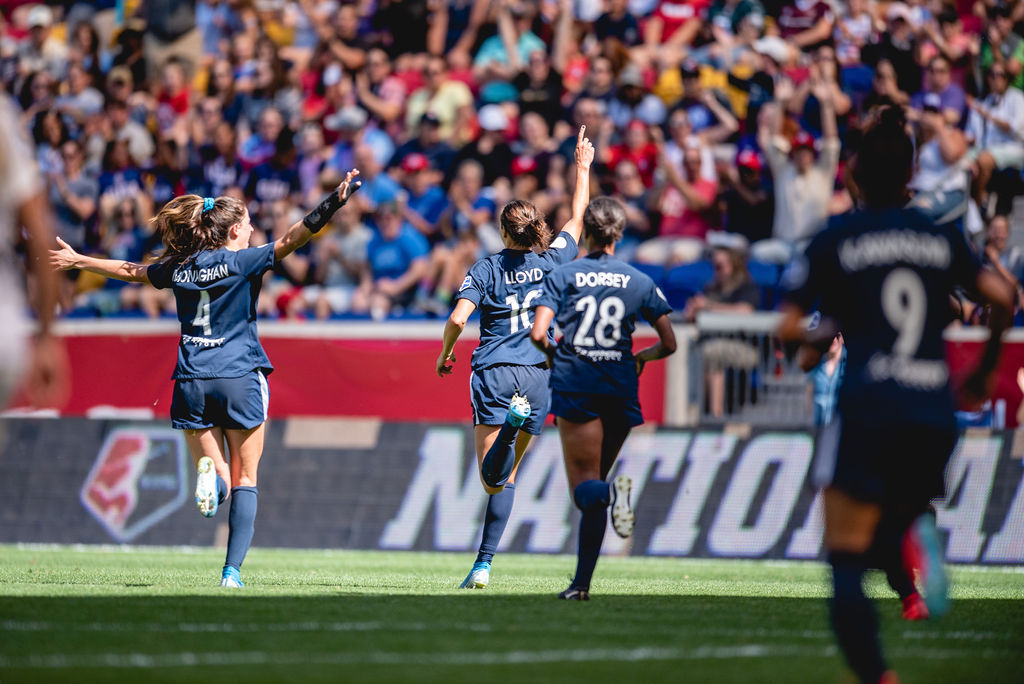 Sky Blue FC made official on Monday what everyone had been hoping for since the summer. After a decade at Yurcak Field spanning two leagues, the team is taking up residence at Red Bull Arena in 2020. The team played there twice near the end of 2019, averaging nearly 9,000 fans. They won’t likely average that many over a full, 12-game home schedule, but that’s fine on several fronts.

First, even averaging half what they got over those two games last season will crush the club’s all-time average attendance of 2,323 and well ahead of the 2019 average of 3,338. Second, The Equalizer has learned, that Sky Blue will not need to meet last year’s Red Bull average in order to make the move to the Harrison facility a profitable one.

Third, and most importantly, is that moving to Red Bull Arena represents the most significant step the club has ever taken in its endeavor to raise standards to line up with the rest of the clubs in the National Women’s Soccer League. It was less than a year and a half ago that this site first reported widespread issues with working conditions at Sky Blue and now here we are with the club about to move from a quaint college facility without any of the appropriate amenities for a professional side and into one of the top soccer facilities in the country.

As goalkeeper Kailen Sheridan said following the 2019 season finale at Red Bull Arena: “This is the minimum.”

Much of the credit for Sky Blue’s off-field turnaround has been heaped on Alyse LaHue, and with good reason. The team’s general manager joined the club in 2018 but kept a low profile until taking over as interim general manager just ahead of the 2019 regular season. The interim tag was later dropped.

“After our players and fans experienced Red Bull Arena in 2019, we knew it was the perfect venue to host Sky Blue and showcase this incredible league,” LaHue said in the joint release sent out Monday by Sky Blue and the New York Red Bulls. “The move to Red Bull Arena builds upon the positive momentum we gained last season and will help propel our club and the league to the next level.”

There remains a long way to go to build Sky Blue into a team that is not viewed as the red-headed step child of the NWSL. The team still has only six wins over the last two seasons — five of them since firing Denise Reddy last June — and has not been in the playoffs since 2013. Three top draft picks have shunned the team over the last two years, including internationally capped Hallie Mace last year and Casey Murphy the year before, a player who surfaced this season with the Reign (Julia Ashley is the other).

With the venue set, Sky Blue can turn attention toward hiring a head coach and making sure this year’s draft picks are ready to join the club. Barring an expansion announcement, Sky Blue currently hold the second and third picks plus the 11th and 13th selections.

As 2019 marked the first season that every NWSL club averaged at least 3,000 in attendance for the season, Sky Blue has a chance to push that bar higher in 2020. As the Chicago Red Stars can attest to, there can be some lonely days and nights in a soccer stadium suited to hold closer to 20,000 when there are a dozen NWSL dates to fill. But the Red Stars’ move to SeatGeek Stadium has been a positive one and so should be Sky Blue’s to Red Bull Arena if they can take advantage of the amenities and access from public transportation.

Here is a quick look at the league’s other eight teams and how they stand in terms of their stadium and attendance situation.

In 2018, Thorns attendance dropped for the first time. The fans responded by pushing the club to new heights in 2019. On August 12, they sold out the newly renovated Providence Park, breaking the league’s single-game attendance record, setting the new bar at 25,218.

By the end of the season, the Thorns were averaging more than 20,000 per game, a first for a women’s team anywhere on earth. That’s more than 13 of 24 Major League Soccer teams (who play five additional home dates and some of whom play in stadiums with capacity less than 20,000). The Timbers have sold out every home game since launching in 2011. A solid goal for the Thorns would seem to be reaching the level where 25,218 show up every week.

Strong work for the Royals in 2019, increasing the attendance from their inaugural campaign. The World Cup bump was certainly a help, but the two biggest crowds of the season were the first two before the World Cup even started. Factor in how much marketing went into the 2018 opener that attracted 19,203 and the increase is that much more impressive. And either way, it is not easy for any sports franchise to see attendance growth in the second season. Salt Lake City is known as a front-running sports town, though, so it will be interesting to see what happens in 2020 at the RIOT after the disappointing way 2019 ended. 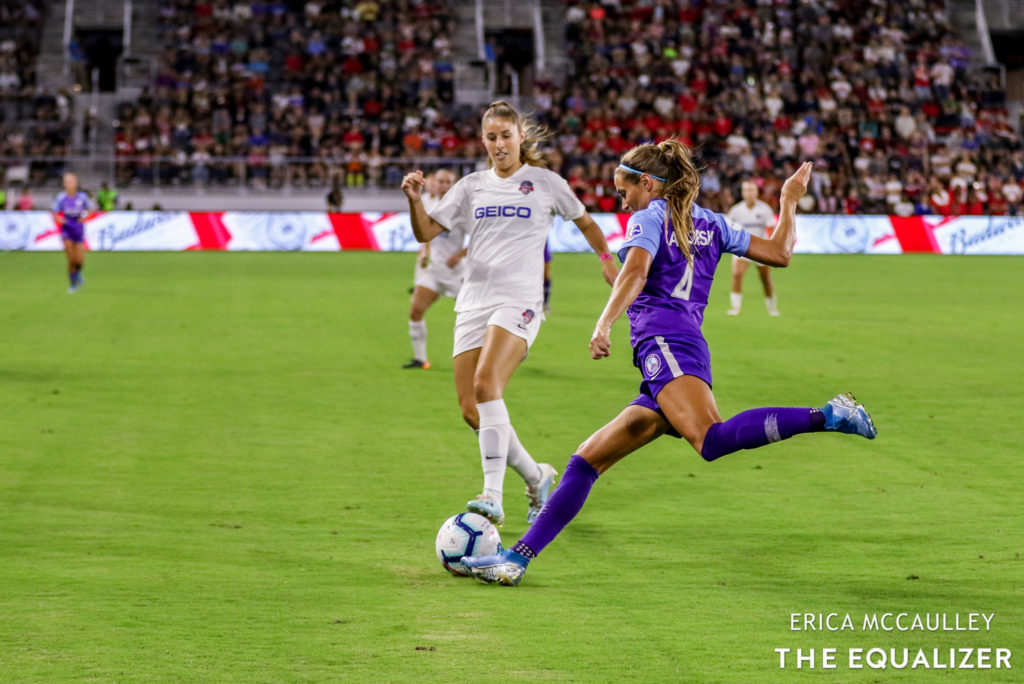 This is really the attendance story of the year. Only two years after fans fled the team following a series of unpopular trades and the belief their owner was homophobic, the nation’s capital emerged as a potential hotbed for women’s soccer attendance. The fact that the maligned owner, Bill Lynch, ceded majority control to Steve Baldwin helped, as did the team waking up after a dismal, two-win 2018.

And then they went to Audi Field and played in front of 19,471. One-off you say? Guess again. The next home match was back at Audi and drew 17,418. Next season will see the Audi Field matches doubled to four and also four games at Segra Field in Leesburg, Virginia. If fans are not too put off having to play musical venues, the Spirit could find themselves as the perpetual No. 3 behind the Thorns and Royals.

The Courage have been in town for three seasons and have seen attendance go up each time. It did not hurt that they arrived a ready-made, championship team and have not finished below first place since they got there. The Research Triangle’s affinity for the game is proving to be a reality, and with the glut of top players and personalities, the Courage should continue to be just fine at the box office.

In other news, owner Steve Malik looks unlikely to win his bid to take North Carolina FC into Major League Soccer. How that would affect a proposed downtown stadium remains to be seen. The optimistic take? Maybe the Courage would be a primary tenant — assuming it gets built.

After two years of dipping, the Pride attendance was up in 2019 and the club clearly enjoyed a World Cup bump. That’s one better than their brethren Orlando City SC, who have been down every year since their 2015 debut in MLS.

Marta will be back with the Pride which should help, but Alex Morgan is pregnant and her future with the team is a bit murkier. Winning could do wonders for the club. That is something that has evaded both Orlando teams over the years, with the Pride’s 2017 run to the NWSL playoffs the only postseason berth for either team over nine total seasons. Once perceived as the soccer center of the south, the city’s reputation has taken a hit in recent years and it has shown at the gate.

The Red Stars enjoyed a banner day on July 21, when 17,388 packed into SeatGeek Stadium. It was two weeks after the World Cup final and for 90 minutes the Red Stars were the center of attention in Chicago. The team did not come close to drawing that number again, but the rest of the figures were considerably higher than those before the World Cup, save for a season-opening doubleheader with the Chicago Fire.

Speaking of the Fire, they have vacated SeatGeek for a return downtown to Soldier Field. Will that help the Red Stars by opening up better dates and allowing them to cultivate the stadium in their likeness? Or will it pull the soccer vibe away from them? The club has done a nice job connecting with the city in recent years, but that plus the departure of Sam Kerr will prove challenging moving forward.

The Reign made good on their move to Tacoma, bringing on bigger crowds and making themselves more known in the area. But they appear to be a club in transition with a “coming soon” tag on their site regarding 2020 season tickets. That’s not a great way to carry over momentum from a World Cup year.

The Dash moved their attendance numbers up for the first team since the Carli Lloyd-induced bump of 2015. The World Cup helped and the organization made some changes to put more people into dedicated Dash positions. But no one in Houston can possibly look at this club being eighth of nine in total attendance and think that is a good thing.

Like Sky Blue and Orlando, a winning product could help. And like Orlando, the general soccer trend around the city is not going the right way. Perhaps the club will figure out how to creatively take advantage of the U.S. national team coming to town for Olympic qualifying early next year.